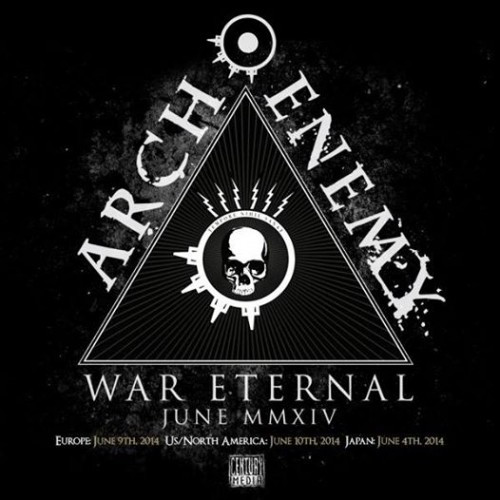 I would guess that established metal bands face a quandary every time they begin work on a new album. By “established metal bands” I mean those who have put out enough records over a long enough period of time that they have a well-defined sound and, by metal standards, a large and relatively devoted fan base. I’m guessing, because I’m not in an established metal band and don’t know anyone who is. Fortunately, lack of first-hand knowledge has never held me back from expressing opinions.

Here’s the quandary: You can continue to do the same kind of thing you’ve done before. This is the safe route. You know you will probably please the die-hard fans, because you’re giving them what they’ve liked in the past. You’ll please your record label, because whatever pleases your established fan base most likely means predictable sales. And because it’s the same kind of music you’ve done in the past with success, you can be reasonably confident that you won’t fuck it up.

But maybe it’s not so safe. Because there’s a difference between writing good new songs that are recognizably YOU and… coasting. Coasting is risky, and I would guess (see above re my complete lack of personal knowledge) that it’s also boring for the people in the band. And when people in a band start to get bored, they’re on the brink of a death spiral.

“Coasting” is another word for “mailing it in”. Another synonym would be “formulaic”. You know the elements of that recognizable sound, and you repeat and reproduce. To be clear, I couldn’t do this, and you probably couldn’t either. It still requires talent to write and record a new song that is appealing, even if it sounds remarkably similar to songs you’ve written and recorded in the past. That kind of talent doesn’t grow on trees, but it’s still a talent with an expiration date.

The problem is that even dedicated fans can tell (eventually) when you’re coasting. And the really nerdy metal fans who write for magazines and big web sites that actually have some influence on opinion and buying habits, they’re not dedicated enough to give you a pass if you’re coasting. They’ll call you on it (unless they’re shameless whores), and a big pile of ho-hum reviews eventually take their toll.

Coasting happens when the creative spark has died, or is dying, or when laziness has set in, or when egoism has deluded you into thinking that you can do no wrong even when you’re really not exerting yourself — or when you reached the pinnacle of your talent long ago, like the high school jock who was the center of attention at 18 but has been tumbling downhill ever since. Or maybe you just like the paychecks and don’t want to jeopardize them.

Some people aren’t content to coast, and actually have the talent and drive to avoid it. Maybe those people feel a kind of shame or guilt at the thought of turning art into commerce. Or maybe they’ve just realized the great truth that when life becomes boring and predictable, you’re on the path to depression, followed by alcoholism, obesity, loss of sex drive, and forgetting to file your tax returns (and to be clear, I’m guessing again).

But what do you do to avoid coasting? You could take a sharp left turn away from your “established sound”, but that’s as risky as coasting. You could wind up with something called Lulu or Illud Divinum Insanus. Or, like a certain Swedish band whose name begins with “O”, you could cause a storm of butthurt among your fan base, even if what you did isn’t terrible.

Or you could evolve, and evolve successfully. My NCS comrade Andy Synn wrote a piece recently (here) about bands who have changed organically — using their “established sound” as a foundation and an anchor point for expanding outward. Some bands have succeeded in pushing the envelope of their established sound in creative ways — they still sound like who they have always been, but they succeed in also sounding reinvigorated and fresh, doing what they’ve done before, but doing it really, really well. I think, for example, that Soilwork did that on The Living Infinite.

Ironically, the bands who are most creatively free may be the ones who aren’t “established” in the sense I defined at the outset. They aren’t hostages to their own success because “success” isn’t something they have, or expect. They can’t make a living playing music, but they can’t live without it either. They do what they feel like doing, and they either don’t give a fuck about the consequences or they care but have no control over the consequences.

The quality of the music they make may be terrible, because being creatively unhindered and being talented are two very different things, or it may be remarkable. And in the latter cases, sometimes no one notices, and sometimes listeners wake up and realize what they’ve been missing; I think, for example, about Inquisition’s Obscure Verses For the Multiverse.

And sometimes the only thing “established” about a band’s sound is that you really don’t know for sure what their next album will sound like, because they’re constantly experimenting and exploring, with more hits than misses — and that in itself is the main draw. Blut Aus Nord comes to mind, but there are others.

You may wonder what prompted me to write these musings, and I’ll tell you. The not so subtle clue is in the image at the top of this post: Arch Enemy have announced that their next album, entitled War Eternal, will be released this coming June. It’s currently being mixed by Jens Bogren at Fascination Street in Sweden. Guitarist Michael Amott is quoted about the title of the album as follows:

“A lot of times life is a struggle, a war against what I like to call ‘mental chains’ in society that try to prevent you from living life the way you want, that try to stop you from making your dreams come true. I have always resented that and I always will.”

I’ve been a long-time fan of Arch Enemy, but they’re also one of those bands who I fear are on the verge of coasting. On the other hand, I thought the same thing about Soilwork before The Living Infinite. So we’ll see. Sometimes the mental chains you put on yourself are harder to break than the ones “society” puts in place.