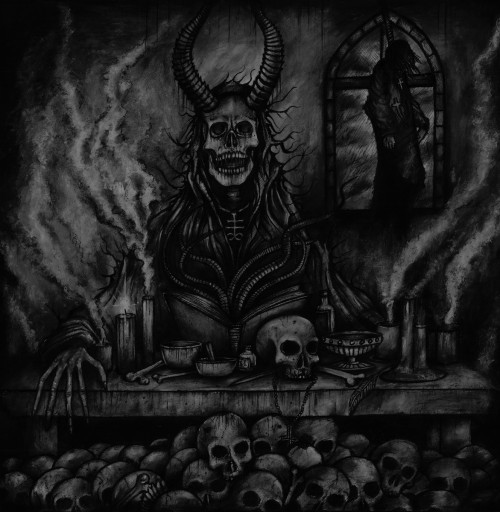 Sometimes my listening decisions are completely ruled by impulse. I have carefully conceived plans in mind, and then they vanish in an instant, for reasons I can only dimly fathom after the fact. Yesterday afternoon, for example, I finally had a short break from my paying job. I had many forthcoming albums I could have dived into, but instead I listened to something that came out in October 2013. I later decided that at a subconscious level I must have felt a yearning to be pounded flat.

I had heard about this debut EP by Liverpool’s Crypt Lurker from many respected sources, including our curmudgeonly contributor SurgicalBrute, who put it on his Best of 2013 list.  He characterized it as “a rolling monolith of raw blackened doom”, and so it is.

The music is simple in its construction, yet it’s ingeniously effective and tremendously compelling. The tools of Crypt Lurker’s trade are mammoth, vibrating riffs, methodical hammering drums, and scalding shrieked vocals that radiate malevolent intent. The band concoct grim, morbid melodies and then wield those implements to beat them relentlessly into your memory. 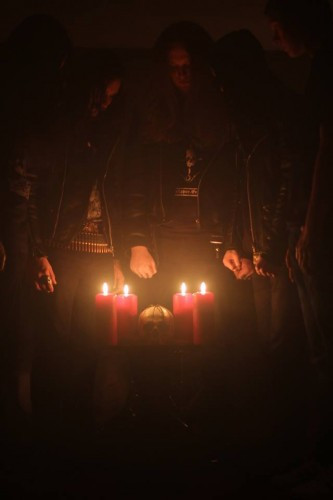 Crypt Lurker are in no hurry. They take their time. They worship the dirge and do their damnedest to bend you to their will. Listening is like witnessing the slow-motion demolition of some ancient gothic cathedral with a two-ton wrecking ball, centuries-old granite blocks crumbling slowly to the ground in great choking clouds of debris, while the dead in its vaults moan their grief at the disturbance of their rest — and howl their vows of frightful vengeance.

The only glimmers of light in this black, oppressive display are the occasional tick of cymbals or the fleeting serpentine guitar leads (and “light” really isn’t the right word for those — “virulent” is probably better). The only break in the ponderous pacing comes about six minutes into the second song (“Bearer of the Two Torches”), when the music briefly begins to swing — in a lumbering, chugging cadence — and some morbid Sabbathian riffing later rears its head in “Crossing the Abysmal Depths”.

But in the main, Baneful Magic… is the glacial striding of a leviathan, shaking the earth as if with seismic tremors. The music produces an almost physical, bone-splintering sensation, and the songs’ bleak melodic hooks are so well-conceived that they’ll stick around your head like a post-hypnotic suggestion. Don’t fight it… resistance is futile. Just sit back and let the night take you.

Baneful Magic… is available on CD from Mordgrimm and on vinyl from Ulthar Records. Mordgrimm is also offering it digitally via Bandcamp:

Here is Crypt Lurker’s Facebook, and this is the music: