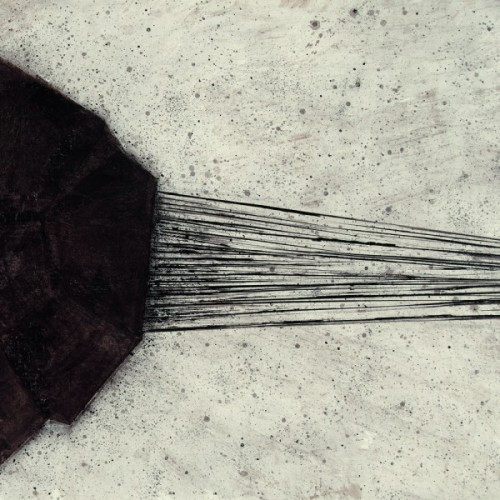 About three weeks ago we featured an advance song from Hyperion, the forthcoming sixth album by the Parisian band Dirge. Today, in cooperation with the band’s new label Debemur Morti, we’re thrilled to help premiere a stream of Hyperion in its entirety.

On Hyperion, Dirge prove themselves to be immaculate practitioners of a dark and beautiful art. They stand like potent spellcasters at the intersection of doom, sludge, and post-metal, a place cloaked in perpetual night, hemmed in by black thorns, lit only by a sliver of moon above and the shimmer of winking stars.

The songs are long, culminating in a 16-minute instrumental closing track. They manage to be both ghostly and very heavy, both ethereal and menacing in the power of their undertow, like the siren song and the bottomless whirlpool. Combining low distorted chords and massive drum strikes with rippling lead guitar lines, mixing raw howling vocals with ghostly, subdued, clean ones, they walk a line between pain and perseverance without ever losing their balance.

Often earthy and brooding, yet also ephemeral and hypnotic, the music unfolds as a classic immersive experience. But this isn’t shoegaze — far from it.  The powerful riffs and rhythms compel movement, like big calloused hands grasping the listener’s neck and shoulders — you will headbang (I’ve already put the opening track, “Circumpolaris” on our list of of candidates for 2014’s most infectious extreme metal songs). And along the way you’ll hear great variety in the voices and a textured layering of sounds that go beyond conventional metal instruments.

I suppose you can tell that I’m well and truly hooked on this album. I hope you’ll succumb to its spell, too.

Hyperion will be available on March 14 (April 15 in North America) via Debemur Morti Productions in both digipack CD and 2 x 12″ gatefold LP. The track list is as follows :

Hyperion can be pre-ordered here. Visit Dirge on Facebook via this link. This is the music: