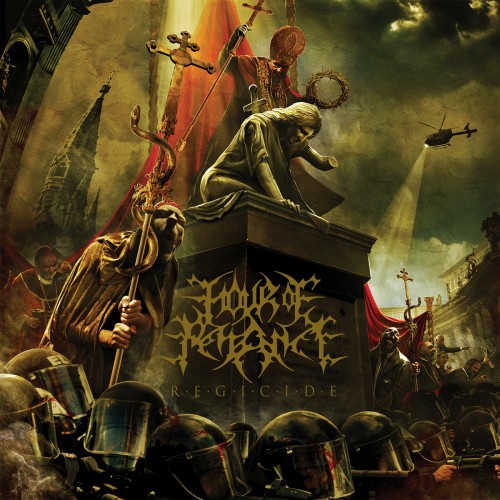 Almost exactly two years have passed since Italy’s Hour of Penance delivered their last album, Sedition. Recently the band announced details about the release of their next album, the name of which is Regicide. It’s due for release by the Prosthetic label on May 13 in North America (May 12 in the UK and EU, May 16 in Germany). And today we got an official lyric video for the album’s first advance track — “Resurgence of the Empire”. You can watch and hear it after the jump.

The lyrical themes of the album revolve around tearing down the walls of ignorance and fear erected by religion and other “dysfunctional authorities” so that freedom might bloom. “Resurgence of Empire” by itself would serve quite well as a battering ram in that demolition project. It would work well on actual walls as well as metaphorical ones. You’ll find out why I say that momentarily.

Regicide is now available for pre-order in physical form here, and digital copies can be pre-ordered on Bandcamp here. A pre-order will get you a free download of this new single. In addition, the album’s first CD pressing will be a limited-edition digipak that will contain three bonus tracks; those will also be available via download card to anyone who orders the album on vinyl or cassette, as well as anyone who orders the “deluxe edition” of the album on any digital platform.

Okay, enough with the sales talk. Here’s “Resurgence of the Empire”:

13 Responses to “NEW MUSIC FROM HOUR OF PENANCE: “RESURGENCE OF THE EMPIRE””