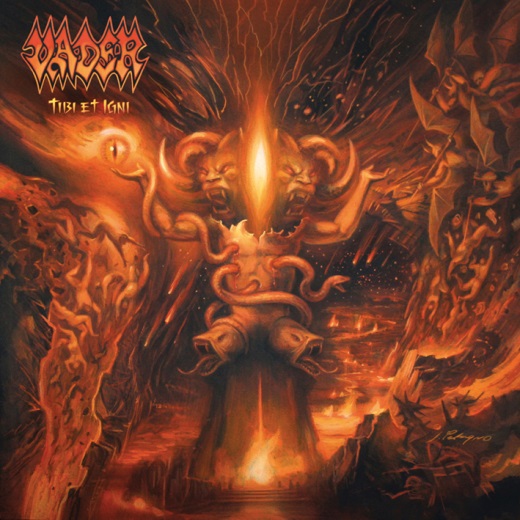 There it is, the cover art for Vader’s next album (their 12th), Tibi Et Igni. My Latin is a little rusty, but I’m pretty sure Tibit Et Igni means “we will hammer the back of your head so hard your eyeballs will be ejected at the speed of sound and then we’ll start on your spine”.

The cover is damned cool. It was created is by veteran artist Joe Petagno, and the album was recorded by the Wieslawski brothers at Hertz Studio in Bialystok, Poland (we already mentioned them earlier today because they recorded Beneath’s new album). The album will be released on May 30 by Nuclear Blast. A two-song single will be released on April 18, both digitally and on 7″ vinyl.

Actually, I just checked, and my Latin is rustier than I thought. Tibit Et Igni apparently means “For You and Fire”. I think this is just another way of saying “we will burn you like dry kindling and scatter your ash to the four winds”. The track list is after the jump for those who are into that kind of thing (the bonus tracks look interesting). Here also is the band’s previously released quote about the new music:

“To all expecting new forms, artistic experiments or other pathetic garbage, we say: GO TO HELL!! We are devoted to metal and loyal to our fans.”