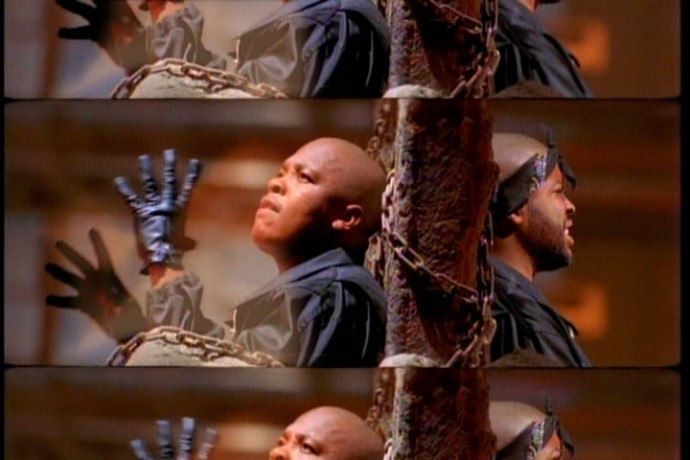 Actually, “Natural Born Killaz” is a pretty natural choice for a metal cover if you think about it. To quote The Font of All Human Knowledge: “The song has satanic and occult undertones and covers such subjects as mass murder, Sarah Connor from the Terminator films, Al Cowlings’ tight bond with O. J. Simpson, schizophrenia, Charles Manson, the attack on Reginald Denny during the Rodney King riots, strychnine poisoning, flagellation in Singapore, Jeffrey Dahmer, Kurt Cobain’s suicide and psilocybin mushrooms.”

In the Conducting cover, the band’s Mikey Powell does the Dre parts and Monte Barnard from Soma Ras (another excellent Sacramento band) handles the Ice Cube parts. As DGR said when he and I compared notes about the cover, “they didn’t mail it in, they really went for it, can’t fault their enthusiasm.” Yeah, you can say that again. This baby is a crusher that’s by turns vicious, eerie, and bouncing, and the two vocalists let it all hang out (if you’re expecting something that sounds like nu-metal, banish that thought). Very nice lead guitar work and militaristic drumming, too.

Not only did the band record the song, they put together a lyric video for it, which you can check below. The song is also streaming on Bandcamp, where you can download it for a dollar. 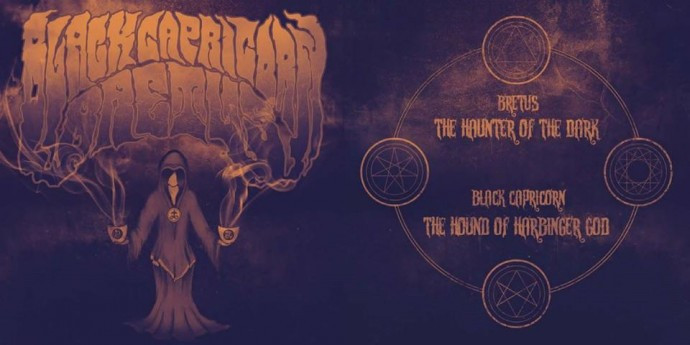 Over the last month I’ve seen several of my Facebook musician friends post links to this next song, and I finally decided that I ought to see what all the enthusiasm was about. The band’s name is Bretus and they’re from Catanzaro, Italy. Before this year, they had released a demo, an EP, and an album (In Onirica), with plans to record another album this year. But before that they’ve now released a new single that’s going to become part of a forthcoming vinyl split with another Italian band, Black Capricorn. The song is also included on a free compilation assembled by an outfit called Doom Over Cthulhu (which you can download for free at this location — the playlist can be seen here).

Those of you steeped in Lovecraftian lore will recognize the name of the single: “The Haunter of the Dark”. It’s a slice of traditional doom with big staggering riffs, wailing psychedelic vocals, and a melody that’s powerfully addictive. It’s soaked in occult atmosphere and exudes psychoactive vapors like a powerful fog machine. Check out the video for “The Haunter of the Dark” right here: 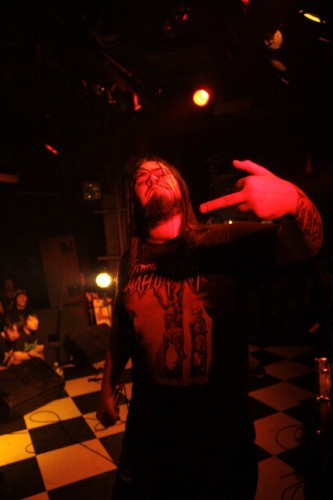 We’ve written repeatedly (and redundantly) about this Japanese band with an American vocalist (Jacob Wilcox), and yesterday we got fresh evidence that they’re still alive and kicking. They released not one but two new songs for streaming — “Abandon Ship” and “Blindness”. Both songs will put a mega-watt charge straight into your brain stem and right down your spine. They zip by at high speed in a fury of blistering riffage and blazing drumwork (evidently programmed). The music is like a combo of brutal death metal, tech-death, slam, and even a bit of grindcore mayhem (and there’s a very sweet guitar solo in “Abandon Ship”).

And Jacob Wilcox still has a beastly and bestial voice.

Death I Am have a habit of releasing their works for free at their official site, and I’m guessing these two will be distributed in the same way, but when I find out for sure I’ll update this post. Here are the videos for both of the new songs, and I’m including the sci-fi themed lyrics below the players.

The heavens split, stars struck the hull
it all began to implode
into the blackness, into the void
last chance sacrificed for pride
violated by the vacuum
compartments instantly depressurized
over the comm comes the order
“abandon ship”

we have artillery target lock at 20k
No need for the ship, commence firing.

a technological blasphemy
integrated into the framework
of what’s left of this world
We must be delivered
from this tiresome fate
We must be free
Praise the infernal almighty!

what has transpired you could never understand!
your limited perspective has brought about the end!
This was perfection, we were one…

I twist the blade
disconnect the hose
drop the wall
It all comes crashing down.

4 Responses to “SEEN AND HEARD: CONDUCTING FROM THE GRAVE, BRETUS, DEATH I AM”