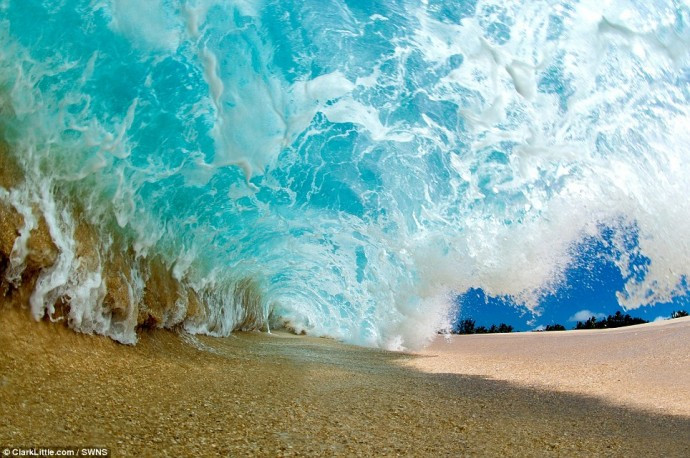 Greetings and salutations, and welcome to another edition of THAT’S METAL!, in which I assemble for your (potential) enjoyment images, videos, and occasionally news items that I think are metal, even though they’re not metal music. For this installment I have eight items.

Clark Little is 44 years old. He lives on the North Shore of Hawaii. He is a surf photographer. Armed with a Nikon D300 camera and a fish eye lens encased in a waterproof box, he goes where the surf is breaking and takes amazing photos, usually from inside the tube of the waves. His camera takes pictures at the rate of 9 to 10 frames per second, but he still doesn’t have long to make his shots before the waves bury him. The results are spectacular.

In the one above, Little captured a large wave while lying on dry sand as it broke to create a “shorebreak barrel”. Seconds after the shot, he was washed up onto the beach — his whole body covered in sand. In this next photo of a backlit wave on the West Shore of Oahu, the wind was blowing strongly offshore, creating a mist flying off the top of the wave. 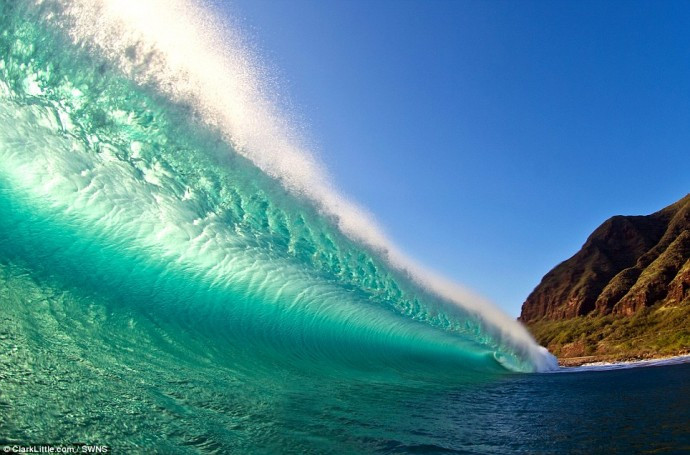 Here’s one more photo. This picture was taken underwater from the backside of a tube on a shallow reef near Tahiti after the wave had broken (from left to right). 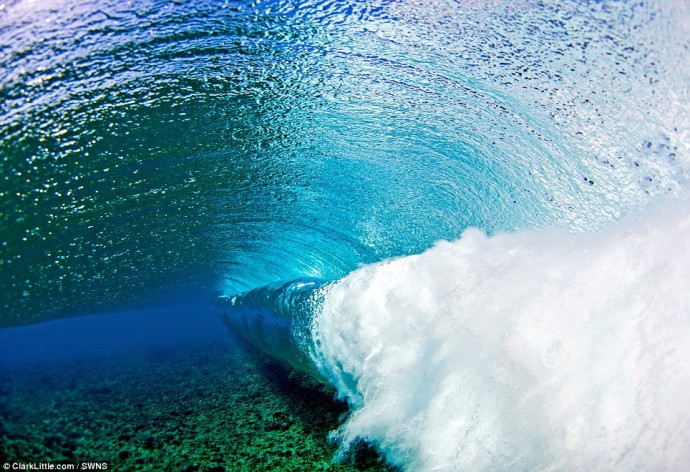 And this is a short feature about Little that aired on CBS television in the U.S. in January of this year.  It includes film of him doing his thing (you can see a big collection of his photos at this location, and his web site is here):

Let’s stay in the surf for one more item.

At a time when privacy advocates in many cities are up in arms over the use of surveillance drones, this next video is a work of art created by a dude named Eric Sterman using a DJI Phantom quadcopter drone. He mounted a GoPro camera to the drone and then guided it above the Pipeline off the North Shore of Oahu this past winter while surfers were out in force. The resulting film, entitled Pipeline Winter 2013, is stunningly beautiful.

I also dig the soundtrack (even though it’s not metal). It’s a piece named “Crystalize” by Lindsey Sterling. Would you believe dubstep violin?

If you’d like to see what the DJI Phantom quadcopter looks like — and buy one — go here. 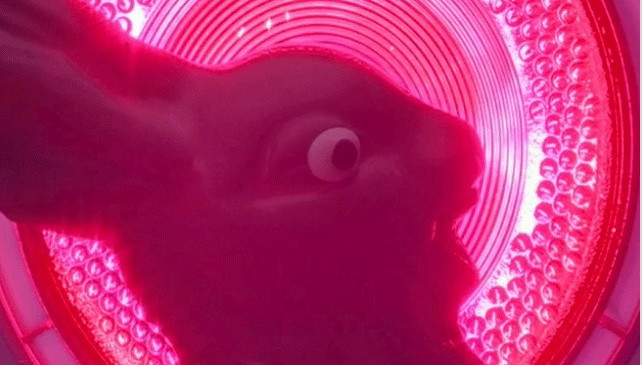 Okay, let’s move from the sublime to the ridiculous.

The following work of genius was made by Lernert Engelberts and Sander Plug for KRO television in association with the Dutch Culture Fund. Oh those crazy Dutch. The music is by Nathan Larson, though I think some rancid grindcore might have made a better soundtrack.

This is also ridiculous. It’s amazing what people will do in Siberia to entertain themselves during the Siberian winters. This dude in the city of Barnaul, for example, decided it would be a kick to be set on fire and then jump off a five-story building. Place your bets as to whether vodka was involved. 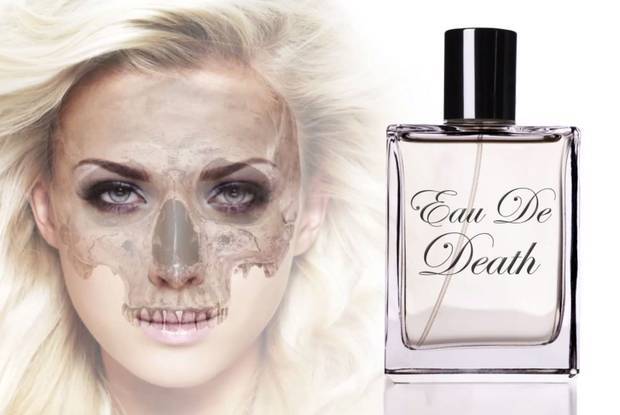 If you’ve run out of ideas for what to get that special someone in your life for the next birthday, anniversary, Valentine’s Day, or Friday night when you were caught shagging that other chick or dude in the club bathroom, have we got an idea for you.

Raychelle Burks, a postdoctoral researcher at Doane College in Nebraska, has produced a recipe for a cologne that will camouflage you when the zombie apocalypse happens. It’s composed of two perfectly named chemical compounds that the human body produces quickly during decomposition: putrescine and cadavarine. And in the unlikely event that the zombie apocalypse never happens, you might still want to stink like decomposing human flesh for other reasons, like if that’s better than the way you normally smell. 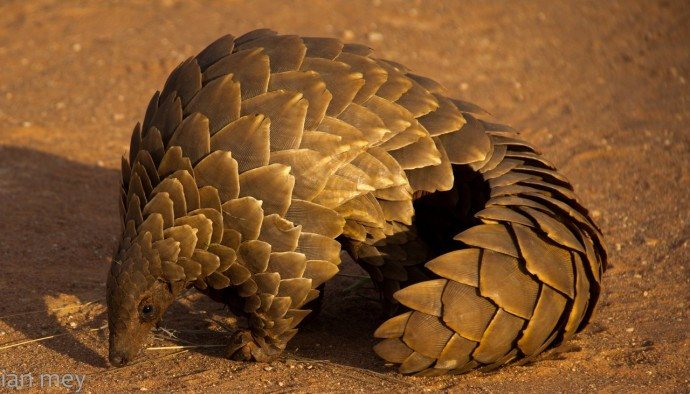 This is a pangolin. Also known as the “scaly anteater”, it’s a nocturnal mammal found in parts of Africa and Asia. I don’t think I need to explain why this fucker is metal.

When a pangolin feels threatened, it coils itself into something that resembles an armored bagel, but without the hole in the middle: 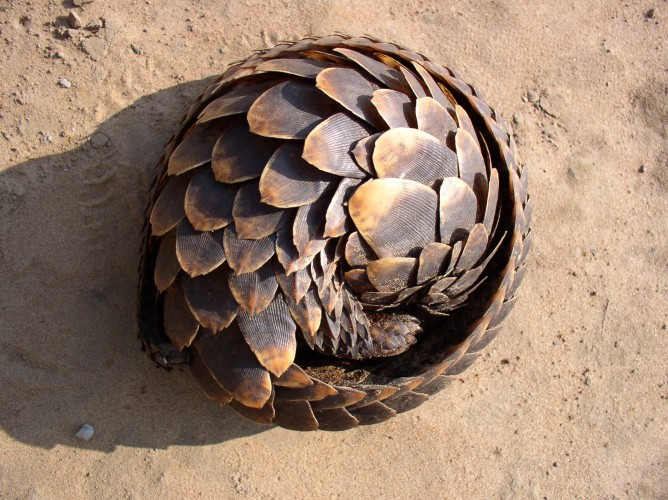 This method of self-defense comes in handy when there are hungry lions in the neighborhood. 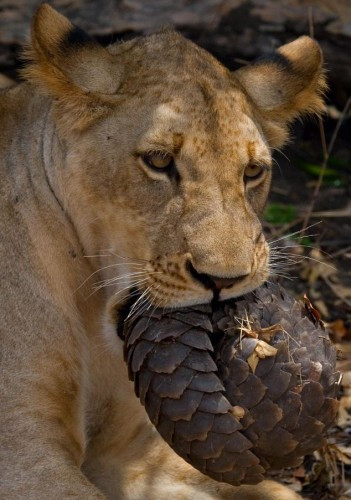 Yes, of course I have video. And yes, there is such a thing as World Pangolin Day. Put that on your calendar for next February 15. 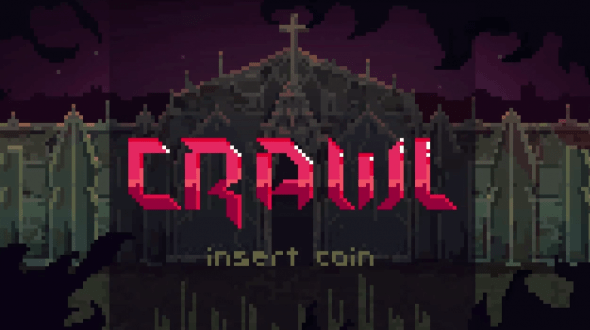 You can keep all your hi-falutin’ CGI wizardry. If you want a fuckin’ metal videogame, get yourself some CRAWL.

The voiceover alone is worth a gander at this trailer. As Ed S. wrote when he tipped me about this thing, “it’s a non-stop demoniacal rant that could be the intro track to some perverse Lovecraftian black metal album”. Indeed.

It’s best to watch this in HD or the pixels get all muddy and blurry.  More info can be found here. 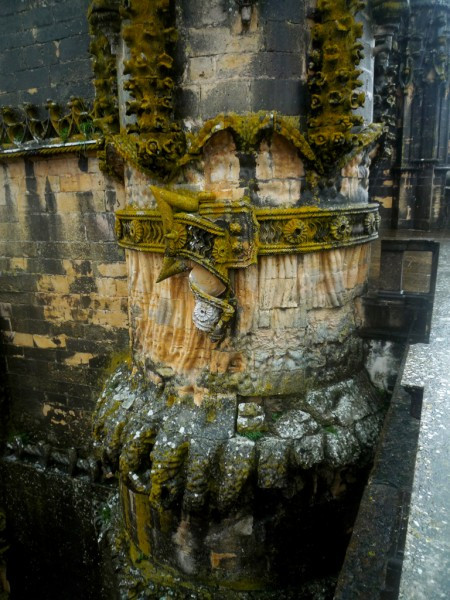 Over the holidays at the end of last year one of our Italian readers, Pietro, took a trip to Portugal. While there he visited the Crusader’s Castle of Tomar. As he commented in his message to me, “What could be more metal than a Castle built by Crusaders that later were tortured and burned alive? Well, the answer lies in these photos: THAT BELT!!”

The Castle and Convento de Cristo was constructed in the 12th Century by the the Order of the Knights Templar. From the other photos I found at The Font of All Human Knowledge and the UNESCO World Heritage site, it looks like a magnificent place. It’s a helluva fort that requires an enormous belt to keep one of the towers erect. And that is indeed one hell of a metal belt. Sadly, Pietro reports that the souvenir shop at the Castle doesn’t sell replicas.

Here’s one more of Pietro’s photos: 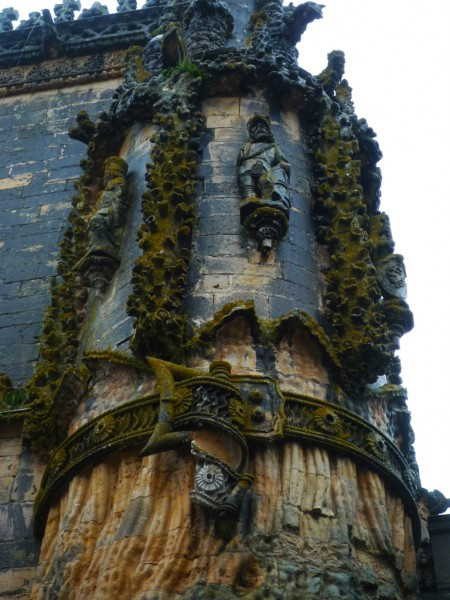 More info can be found via the links above and the Convento de Cristo’s official site.

And that, my friends, brings this installment of THAT’S METAL! to an end. As always, enjoy the rest of your fucking day.