(In his 45th Synn Report, Andy Synn looks back at the discography of Denmark’s Horned Almighty.)

Horned Almighty are a four-piece Satanic coven from Denmark who deal in a ragged, ugly form of Black Metal which melds raw thrash intensity with a Satyricon-esque sense of groove, and a primal punk-ish passion for perversion. There’s even a hint of Death Metal to the band’s sickening sonic synthesis – their gargantuan guitar tone and booming bass lines are delivered with the same crushing, tank-track aggression of early Obituary – while the bowel-shaking, gut-level heaviness of the band’s low-end rumble is pure Celtic Frost.

With four albums of malignant musical menace already under their collective belt, the band are currently in the studio laying down the foundations for their next full-length World of Tombs, so now seems like the perfect time to introduce you all to their brand of balls-to-the-wall blackened misanthropy. 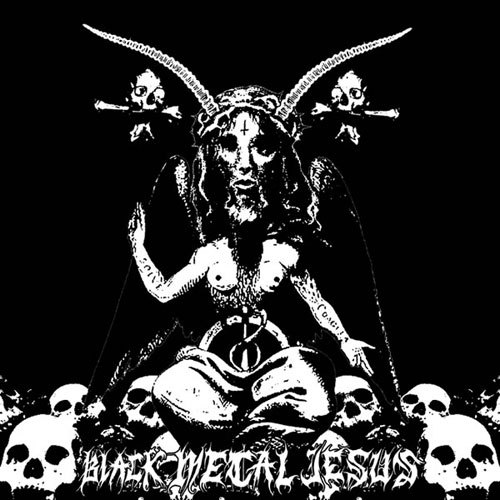 The raucous “Satanic Fatherland” kicks things off in suitably demonic style with its violent mix of thrashing rhythms, scalding guitar licks, and disgusting d-beat drum work. Spiteful vocals reel off a litany of blasphemy and depravity over a boiling cauldron of pure rage as the band hack and slash their way through four minutes of animalistic aural antagonism.

With its cruel combination of swaggering rock beats and grimy, stop-start riffage, “Terror Soul” is a perfect storm of flensing hooks and misanthropic magic, virulently infectious and disgustingly catchy from its stomping intro to its frenzied conclusion.

Though “Carnival of Dead People” starts out with a sinister, doom-laden intro, it quickly transforms into a scathing torrent of vicious blackened thrash, garbed in needle-sharp anti-melodies and rusted, buzz-saw hooks. The grim grind of its mid-section transforms the song once more into a bubbling morass of guttural death vocals and slow-chugging depravity, leading into the haunted sturm und drang of “Black Metal Jesus”, all bleak blackened chords and nightmarish apocalyptic atmosphere.

The album closes with the aptly titled “Complete Utter Darkness”, a terrific piece of sullen dissonance and hellish disharmony (akin to the sort of thing you might expect The Howling Wind to produce) which practically bleeds blackened nihilism from every cracked and creaking drum beat.

The imperious intro of “Praefatio” sets the stage for “Glorification…”, which wastes no time in beating and bludgeoning the listener with its punishing bass lines and ravaging riffs. The vocals – thicker, darker, harsher – take on a new and unholy life, all fire and brimstone fury, while the drums beat out a manic refrain of pure hate, seemingly always about to implode under the pressure.

The punchy drums and paranoid guitars of “Arrogance of the Wicked” mix and match taut, bruising thrash beats and loose-limbed, punk-infused guitar into a Frankenstein’s monster of twisted rhythms and lucid insanity, while “Glorious Horror” dives straight into a pitch-black assault of blasting percussive power and face-ripping riffage, fuelled by an alchemical concoction of pernicious, oily bass lines and raw, combustible screams.

“Discipline of the Almighty” is a black-thrash battalion of spiked riffs and chain-linked bass, a metallic monster of a song that gives no quarter and shows no mercy. The utterly toxic vocals unleash a barrage of blood and blasphemy over a savage series of rabid chords and whirling-dervish drums, leading up to a nauseatingly heavy, brutally slow, middle section that drags you down into the gutter, to wallow in the filth and fury.

The sound of “The Devil’s Music” is akin to Anthrax meeting Darkthrone tossed together into a woodchipper – primitive, thrashy, and drenched in gore – replete with a nice line in pulse-pounding bass and tinnitus-inducing lead guitar, whereas “To Despise the Life” is a different beast altogether. Slower, uglier… more monstrous… it drags its scaly hide through 4:45 of crippled, chugging riffage and cold-blooded tremolo runs, dripping venom from every hooked fang and barbed claw.

The unrepentant malice of “Malicious Mockery” is apparent from the very first ragged bellow of the vocals. The track twists and turns with remorseless, whiplashing intensity through a sinuous sequence of vibrato-inflected riffs, searing trem runs and clashing, cataclysmic chords.

The finale of the album comes in the unholy pairing of “Repentance” and “Cursed with Insight”. The former is a stomping headbanger of primordial riffs and chilling, reptilian horror, the latter a berserk blackened blizzard of caustic guitar work and bone-rattling bass, set to a cacophony of chaotic drumming dynamism. 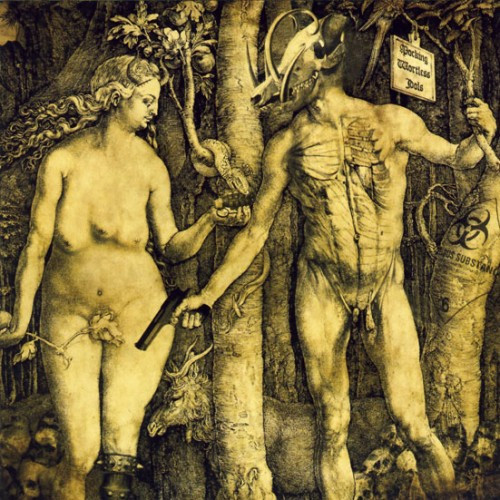 The nihilistic punky aggression that fuels “Vile Works of Witchcraft” immediately warns the listener that this is a Horned Almighty even more pissed off and furious than ever before. The deceptively quiet intro suddenly explodes into a blitzkrieg bop of savage musical mayhem, rumbling drums and clanking, armour-clad bass lines bulldozing their way remorselessly over everything in their path. The guitars are heinously heavy and bursting with wicked hooks, moving from howling blackened winds to priapic rock grooves without a moment’s hesitation.

“Contaminating the Divine” discharges explosive rounds of devastating riffage and pounding drum work, laying down a wall of cut-throat vocals and thick, slimy bass while an inhumanly infectious chorus refrain proclaims its heresy loud and proud. The drumming – never given enough credit in this band in my opinion – matches the guitars twist for turn, hybridising its unhinged Black/Death/Thrash/Punk style to lethal effect.

With its viral, repulsive bass line and parasitic punk-metal chords, “Death of the Soul” is an instantly infectious piece of audio nihilism, set to a soundtrack of gut-wrenching growls and ponderous, hammering drum beats. It’s followed by the vampiric black ‘n’ roll groove of “A Satanic Salutation” which struts and swaggers with arrogant, antagonistic pride, delivering a brutal bombardment of pugilistic riffage and withering vocal hellfire.

“Litany for the Sick” unleashes a scorched-earth onslaught of visceral, violent guitar work that lays waste to all in its wake, ravaging, raping, and razing without mercy, after which “The Doctrine Supreme” comes in to sterilise and cleanse the aftermath with its heaving, acidic bass lines and brutal sledgehammer drum work. Marching relentlessly forward like a lumbering behemoth of remorseless metallic devastation, it possesses some of the hookiest, dirtiest riffs the band have ever laid down, each one a symphony of sickness in its own right.

The shockwave assault of “Manifestation of His Glory” crushes and decimates without mercy or restraint. The vocals spew forth Satanic savagery while the drums and guitars lock together into a brutish blasting groove that slams straight into the ground-and-pound offence of “Day of Purification”, which hacks and hammers with predatory precision, before the crawling dissonance and nauseating bass lines of “The Serpent Tempter” bring the album to a close. 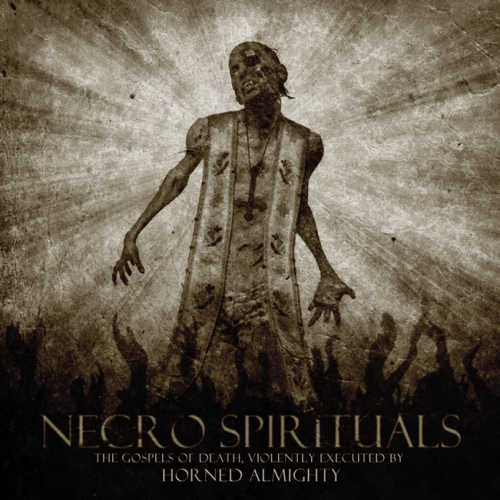 Bringing the thunder right from the start, “Necro Sprituals” wastes no time or effort on introductions, instead diving straight into an exterminating salvo of corrosive death growls and neck-snapping rhythms, ripping and tearing with rusted, razor-edged riffs, breaking bones and cracking skulls with its brutal, hammering drums, corrupting and defiling with injections of insidious melodic malevolence.

The hooky butchery of “Fountain of a Thousand Plagues” is bolstered by a clanking, death metal guitar tone and undertones of slithering, sinful bass. Chugging riffs and juddering drums weave their ruinous conjuration as rolling kick patterns and strangled solos stab and bludgeon their way through the calculated insanity.

Bullish and belligerent, “Sworn Divine Vengeance” is heavily armed and loaded for bear, clanging, clashing and chugging its way through an array of throat-rending vocalisations, irresistible headbanging rhythms, and seductive swinging tempos. By contrast the frantic “Age of Scorn” is a raging torrent of roaring, venomous vocals, blistering, blackened blast-beats, scything riffs and tangled, choking bass lines that never lets up, and never relents.

“In Jubilation and Disgust” is a ravening, slathering mutant of a song built around a barbed-wire run of asphyxiating electric tremolo. Massive, monstrous riffs add their considerable muscle to the cause –a mix of suffocating groove and pounding aggression – before it all climaxes with a lithe and decadent solo, breathing a miasma of sickness and decay.

“Blessing The World in Pestilence” is a kamikaze blitz of machine-gun chuggery and execrating vocals, pure blackened death-thrash at its finest. The drums rumble with punishing force while the riffs scar and slice with nimble-fingered savagery. It all leads into the battering-ram ferocity of “Illuminated Void”, whose rancorous riffage and primitive, profane chorus unleash the beast like never before, guided by a fiendishly precise fusillade of fanatical drum work.

The sludgy, dragging crawl through shattered glass and broken teeth that is “Blasphemous Burden” follows, a sacrilegious sacrament of scorn and betrayal. Its bruising, filthy bass-lines and gargantuan, crumbling chords eventually give way to a wilfully perverse, up-tempo beat-down that marries Hellhammer to High On Fire in a display of gloating desecration.

It all culminates in the creeping horror of “Absolved in the Light of God”, a heretical anthem of slowly shifting chords and hostile vocals, backed by a rock solid drum beat of unerring hatred. Over the course of the track sudden eruptions of mangled machete riffs and tripwire tremolo redline the aggression meter over and over again, until the whole thing simply collapses under the sheer weight of its own perverse existence.

Sample song: “In Jubilation and Disgust”