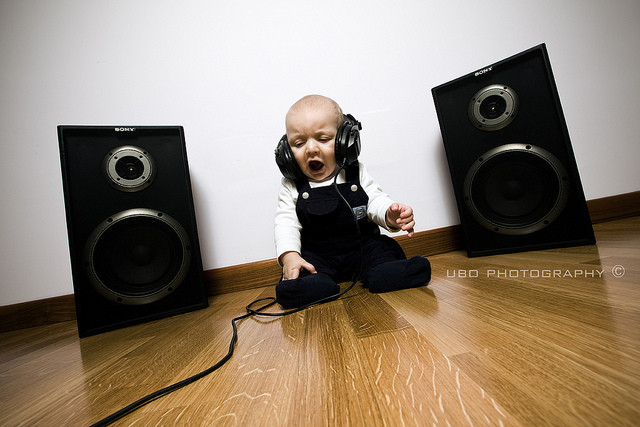 (Guest writer Andrew Rumbol delivered unto us this interesting discussion of psychological research that attempts to identify the effects of aging on tastes in music.   Of course, there’s a metal angle to what he has to say… and invitations for your comments at the end.)

An interesting piece of research came out near the end of last year, from the department opposite the lab I work in. You can read the official press release here (which also links you to the primary research paper, if you’re interested in nerdy things like their sample selection or standard errors):

This group of psychologists undertook two cross-sectional studies (looking at a group of people that varies in one particular aspect, but is similar in others such as ethnicity and socioeconomic status), to investigate how people’s music tastes change throughout their lives. They found a striking trend: our music tastes pass through 5 distinct ‘dimensions’ – intense in adolescence, contemporary then mellow as early adulthood progresses, sophisticated in middle age, and finally unpretentious. I’ll discuss these results in more detail later – but, being both a scientist and a cynic, I was curious to find out how (and how precisely) these categories were defined.

So, a brief history on the psychology of musical preference:

The first rigorous studies attempting to classify particular musical “dimensions” took place around 6 years ago. These tried to cluster music genres based on shared listener preference and listener personality traits, from the results of (predominantly internet-based) surveys.

Of course this approach has its flaws – it assumes that preference is determined solely by inherent properties of the music, not other factors such as social class, generation, or political affiliation. This is clearly not the case. Check this graph I made from Rentfrow et al.’s 2009 data, plotting social class against genre preference: 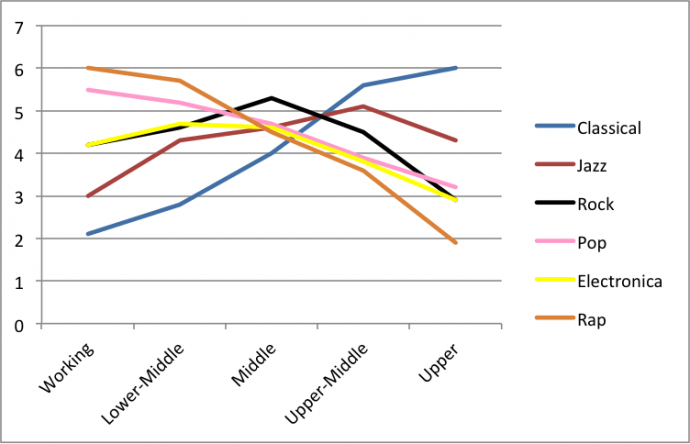 In greyscale, that would make a killer black metal logo.

Anyway, pop and rap listening negatively correlate with class, whereas classical listening correlates positively. Electronica and jazz listening peak in the lower-middle and upper-middle classes respectively, and ‘rock’ (including hardcore, punk, goth, ska, and “heavy metal”) falls nicely in the middle. We scientists get a bit too excited about symmetry sometimes…

So, genre preference doesn’t only depend on the musical content, but it can still be a good indicator of some things. Check this other graph I made from Desling et al.’s 2008 data, plotting personality traits against genre preference: 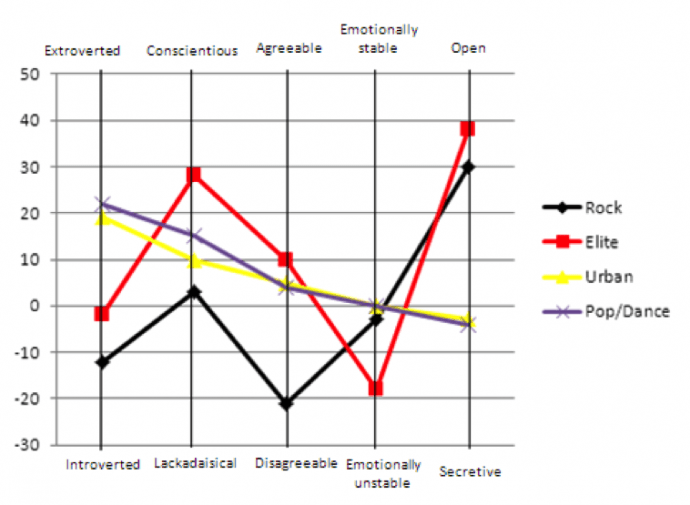 These data suffer from two serious flaws though, I think.

Firstly, the sample of people they were testing: a selection of students from a Danish school. No controls for class or socioeconomic status were made; so EITHER this could just reflect the reactions to music in one particular social class (imagine if you take a social group who essentially all listen to classical music – makes sense that the one or two who listen to metal are more introverted, right?)…

OR the social class of the students was varied, in which case the cause of these trends might be this difference in class, and not the music itself (working-class urban music fans might be extroverted not because they listen to urban music, but because extroversion – just like urban music – is particularly characteristic of their social group).

Secondly, as I’m sure NCS readers are sick of being told, genres are nasty, ill-defined things. I imagine the personality traits associated with Xasthur listeners would be different compared to those of the typical Korpiklaani fan, both classed as ‘rock’ in these studies.

This is just not very good science. A different way of classifying music – a way that takes these various factors into account – was required, before any reliable science could be conducted into how and why different people like different kinds of music.

In 2011, Rentifrow et al. conducted a study on a representative set of 1600 subjects. He played them a wide range of audio samples, and asked them to describe how much they liked each one. These had never been released (warding against any bias for familiarity), and some had vocals removed to avoid confounding factors (people might relate to the human voice – not an inherent characteristic of the music, as such – and thus, for example, rank instrumental jazz pieces very low).

He analysed these results with a statistical method called PCAVR (principal component analysis with varimax rotation), which creates a set of ‘components’ for your data: clusters of data which vary in one particular aspect. The largest factor of variance in his data was, of course, personal taste, but the analysis also indicated five other preference factors. A range of other mathematical and computational analyses all supported these data: that there are five distinct musical ‘dimensions’, and our preference for these determines our taste in music, in conjunction with external factors such as generation and social class.

These dimensions were named:

In the virgin light of this discovery, Rentifrow partnered with American researcher and musician Arielle Bonneville-Roussy to conduct the two cross-sectional studies I mentioned above. The first was an investigation into how engagement with music changes with age, the results of which indicated that, in general:

• the importance we attribute to music and the time we spend listening to music both decrease with age
• the contexts in which we listen to music wane with age, often limited to solely private situations

I find the first result particularly interesting. Having not two weeks past lain in passing my palm-sized offering atop a weathered hilltop cairn to milestone my twenty-first year (and vowing solemnly to avoid circumlocution, verb-ing nouns, regurgitating clichés, and skipping oxford commas in what must pass artistically for dotage), I’m hardly the most venerable of the subjects tested here. I’d argue, though, that my love and appreciation for music has only strengthened with age.

A career in research and moving in with my partner have both inevitably cut down on the amount of time I spend just listening to music, but if anything I appreciate that time more now than I did three years ago. Similarly, whilst there are things that mean a lot more to me now than a first-pressing Eld LP (namely my family, cancer epigenetics, and finding a house to live in next year!), in non-relativist terms I’d appreciate the record more today than I would have when I was 17. How about you guys?

The second study was the one I mentioned at the start: by assessing the musical preferences of a cohort of 250,000 subjects of differing age, they discovered that on average, our tastes segue from intense in adolescence to contemporary in early twenties, mellow in early adulthood, sophisticated in middle age, and finally unpretetentious in old age.

Of course, this is an average of what happens to the average person – and average people aren’t music fanatics. When I first saw this study, the cynic in me postulated a profusion (to sidestep those authorial pitfalls plethora and myriad) of reasons for this vicissitude, which had nothing to do with inherent enjoyment of the music – social habits, professional acceptance, image, I’m sure you understand.

When procrastinating by setting up a Discogs wish list recently, though, I was reflecting on how my tastes have changed over the last few years, as a self-professed music lover, and these changes actually seem to draw a reasonable parallel with the findings of the study. From the angry progressive/melodic/technical death metal that dominated my teens, my tastes veered towards the immersive and atmospheric. I discovered black metal, and became particularly interested in the Cascadian/folk scene for ideological reasons. Through these I discovered the world of neo-folk, psych folk, and wyrd folk, and thanks to these softer styles of music I also started to appreciate electronic, post-rock, ambient, and modern classical. Recently I’ve been exploring classic rock, as well as upbeat styles of hard rock and folk/Viking metal which I’d eschewed before for being too light-hearted and juvenile – but hey, it’s fun, who cares what people make of my taste?

There could be a whole number of reasons for these changes. I think the key factor was moving in with my partner, who does enjoy some metal but doesn’t share the ideology that if Meshuggah haven’t cured your 8am hangover already then you’re not playing them loudly enough. This encouraged me to explore softer styles of music that we both might enjoy, and I can’t thank her enough for introducing me to Atom Heart Mother and Homogenic!

So, I suppose the whole purpose of me writing this was because I’m interested: how have your tastes changed, and why, do you think? Could it just be that the older we get, the more likely we are to enter situations that will encourage us to expand our denoted preferences? Are there artists you like now at whom your younger, more pretentious self would have turned up their nose?

The average metalhead, from my experience, adores music with a genuinely singular passionate fervour – so I’m curious to see if the average trend discovered in this study holds up amongst NCS readers, for whom I’m sure music is a lot more than just a social tool. So, over to you – how have your tastes in music and metal changed?

56 Responses to “AGE AND THE PSYCHOLOGY OF MUSIC PREFERENCE”