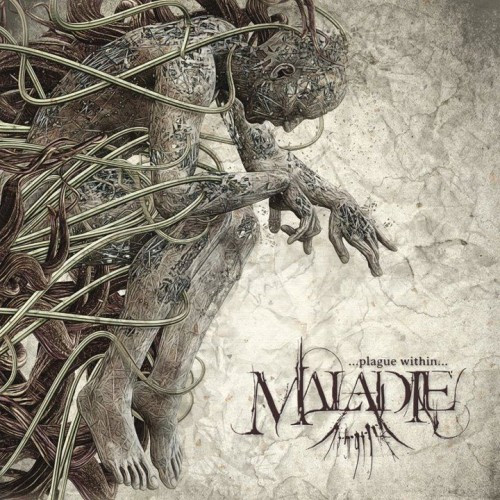 (For our third review of the day, Austin Weber discusses the debut album by Germany’s Maladie.)

How does one accurately capture the essence of a brilliant work of musical art? Certainly there are many ways, a variety of different approaches, different attempts to quantify opinion, while hopefully eschewing the concept of good-because-it’s-good, and bad-because-it’s-bad. But at the end of the day, words are merely words, and what’s captured by the ear and experienced in the mind and soul from a truly brilliant piece of music is what matters. The following words only exist as a vessel with which to extend an invitation to agree or disagree with how I feel, in this case, about Maladie.

Maladie are a 9-piece German metal group, a band I came across a few months back when doing one of my usual deep searches within the bowels of Metal-Archives.com. But to be precise, only 6 people play on Plague Within, as they added, improved, and altered into a  9-man line-up after Plague Within was released. At first I only intended to include them on my “Remnants of 2013” article (coming soon!) with a brief write-up, but then I came to the conclusion that I wanted to write a full review after becoming obsessed with “1979” (which is basically the exact opposite of the Smashing Pumpkins song, lest anyone like me think of that initially as well).

The guitar-work here is damned impressive — and comes as no surprise, since one of their guitarists, Mark Walther, plays in Spheron and their other guitarist, Björn Köppler, is a member of Tombthroat. Their triple vocal attack is intense, with Alexander Wenz and Déhà scraping their throats performing a range of metal vocals and Bernd Wener stepping in at all the right points with triumphant, fitting, clean singing during both furious passages and also in the expected slower and progressive points. 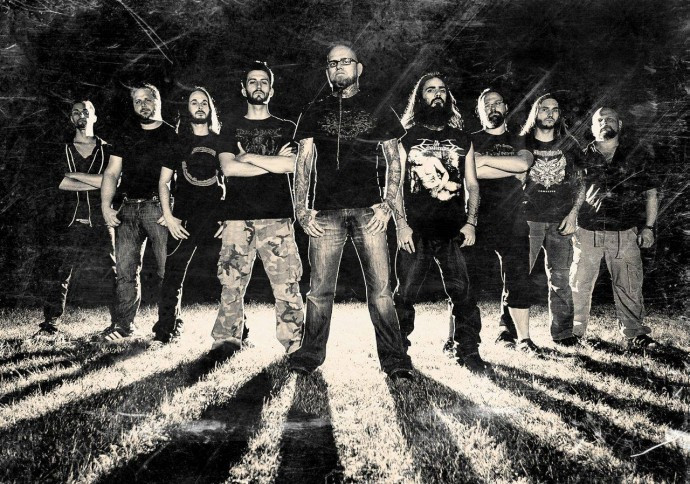 Maladie come across sort of like a hydra: They play a grandiose form of progressive black metal with sweeping orchestral and death metal pairings, a lot of technical guitar-work, powerful singing that fits, some seriously sick, machine-like but humanly captured drumming courtesy of Cornelius Althammer (who also played bass guitar on the album), along with snarls and growls from hell, and it all comes together perfectly.

Some “progressive” bands have long songs that favor repetition, but that’s not Maladie. They cram so much into their music, it’s a real headrush. You get a solid slice of death, black, and prog grounded in orchestral themes in every song, and sometimes hints of thrash, too. The delivery can be avante-garde at times, such as the almost Latin acoustic-guitar-picked ending to “Yersinia Pestis”, with a fuzzy rainfall of drums and noise that both swallows and soothes as the finale. Quite a bit of fascinating acoustic work emerges at odd points, hitting more Middle Eastern and Latin melodies than the folk ones that are more common in black metal.

The album includes three piano-focused tracks performed by vocalist Déhà (who also played keyboards and cello on the album). They are no gimmick, instead serving to enhance the identity of Plague Within as a richly operatic and theatrical experience. Even the massive, choking, blastbeat-driven nightmare of an opener, “Animus Fatalis”, is introduced with a short piano-led beginning. That song is an epic in its own right — violent and vile, the perfect introduction to the eclectic and virtuosic realms inhabited by Plague Within. Getting back to the piano interludes, the first of these is ”Imperditus”, which brings to mind the kind of eerie music found in certain horror movies. It features just the right amount of dark tinge. The second, “Morbus”, comes across as a more classically oriented piano composition. And it serves as a fantastic transition into my favorite song of the album, “1979”.

If I could marry a metal song, that song would be my choice. Because it’s got everything you could ever want in a metal song: Hair-raising vocals, manic tortured riffs, a slick slithering bass solo and often audible bass work, both machine-like and marching drum beats, poetically fitting clean singing, and a big bold beautiful orchestral climax that comes together brilliantly. It’s a sad ending to an energetic and swarming song, but also quite catchy and emotional. Parts of the song are so motherfucking angry it gets me pumped in the geekiest way possible, and then other parts make me want to pump my fist yet again, and do epic things. So basically the song is audio steroids dipped in periods of sheer bliss. It’s a song I’ve replayed an absurd number of times and will continue to do so.

After that song, album closer “Transgressus” arrives to absolve us of the insanity of which the rest of the album has us partake, with its cleansing rain-backdropped intro crisply capturing a rumbling thunder. As it progresses,  sparse piano melodies slowly build and align with swelling cello playing while the storm soundscape recedes, and then the music shifts again. Softly uttered words come in, with backing hymn-like vocals subtly rising, as it all begins to fizzle back into the rain and crackling thunder yet again in the distance. Perhaps the song is indicative of the beauty that lies between the pain and noise of all life; it certainly feels like the correct emotional ending to the powerful dynamic journey and course of Plague Within. It’s an album whose anger always seems to be searching, not attempting to wish for death, but to understand death and learn from the pains of living.

This album did come out in 2012, but I didn’t see many Google search results for it on English-speaking sites, and it’s an album I can guarantee a lot of people will love, so I felt the need to review it despite its age. Maladie apparently got a lot of press and acclaim in their homeland of Germany, and it’s a shame they aren’t more well-known worldwide. As I said at the outset, no words can fully capture the immensity and variety of deep emotions that Maladie mercurially blend, shape, and deliver like masters of their craft. Plague Within is a massive, haunting album for which words simply do not suffice. It perfectly captures a truth about humanity and the human condition, that we feel so much of what is wrong is inflicted by external forces, when the real issue is frequently the plague within each of us.

6 Responses to “MALADIE: “PLAGUE WITHIN””