Each one has its own allure, its own character, from the uncompromising, to the unknowable, to the unorthodox. Each one has its own voice and style, from the demonic, to the despairing, to the deranged. Yet each one is united by an undercurrent of remorseless passion and refusal to follow the path of others. Each one a visceral, violent, dissonantly melodic and brutally infectious example of blackened musical magick. 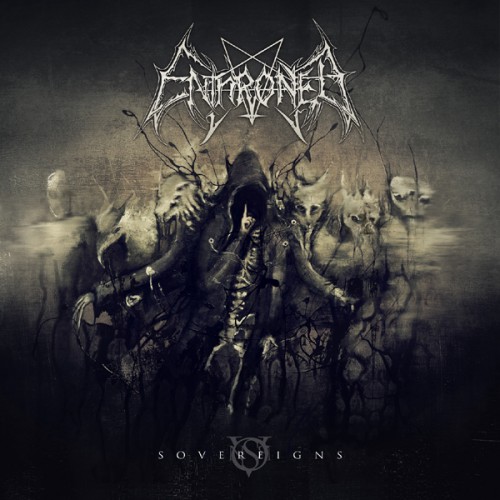 There’s a tendency in certain metal circles to view a band’s early work as automatically their best and definitive. Yet despite Enthroned having existed for just over 20 years now, and although their earlier works are considered relatively seminal by many, for me there’s a very, very strong case to be made that it’s only in the last decade that they’ve truly hit the top of their game.

And while Xes Haereticum and Tetra Karcist signalled the start of a new age, it was Pentagrammaton and the truly superior Obsidium which really set a new standard of pitch black art. So now the band have returned with their tenth full-length album, Sovereigns, a blasphemous testament to their right to rule.

Incredibly, impenetrably dark, the band’s signature savagery is still present and correct on songs like “Sine Qua Non” and “Of Feathers and Flames” – a Belgian blend of Norwegian filth and Swedish fury that melds corrosive riffs and strangled tremolo with moments of eerie horror and blasting extremity – but this time around it is tempered with an edge of bleak, occult dissonance that recalls Deathspell Omega at their most primal.

It’s something that was hinted at on Obsidium, but which the band have clearly chosen to explore and exploit more fully on Sovereigns, weaving together threads of spellbinding dissonance and searing Satanic melody, balancing sheer extremity and esoteric diversity with a coldly calculating intellect.

Though all the songs bristle with venom and rage, they give voice to their demons in different ways. While tracks like the virulent riff-frenzy of “Of Shrines and Sovereigns”, or the feral lunacy of “The Edge of Agony” erupt in an obsidian inferno of pure hatred and loathing, others, such as the doom-laden “Lamp of Invisible Lights”, smoulder with ghastly dread.

Ultimately, beyond the blastbeats and blasphemy, it’s this balance – between choking gloom and serpentine glamour, menacing dissonance and dark melody – that serves to make Sovereigns another jewel in the band’s deadly crown of thorns.

Sovereigns will be released on April 15 by Agonia Records. 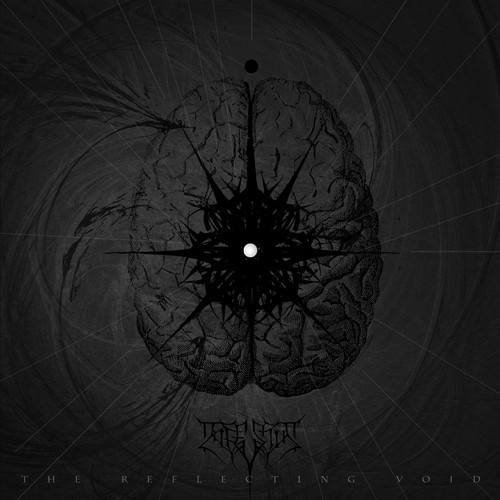 It was Islander himself who introduced me to this (one man) band with his review of Ex|ist back in 2011, and they quickly became one of my favourite Black Metal artists due to their irrepressibly bleak outlook and tormented talent for conjuring unconventional riffs and irresistible rhythms out of the nothingness and void. Every element, every riff, every drum part, every caustic vocal, is the product of one man’s madness and genius, a fascinating window into the darkness of his soul.

“A Dying Dream” is cold, dark, and depressing. Bristling with aggression and anguish, brimming with loss and loathing, full of massive, driving drums, scorching riffs, and desolate, suicidal melodies. It’s a near perfect opener which encapsulates in microcosm the tone of the album.

From then on it just gets heavier, nastier, darker, and more malevolent. “Spiegel der Seele” is 7 minutes of harrowing progressive despair and mournful melody, wielding its scything riffs and heart-rending moments of clean guitar with serial-killer sophistication. The multi-layered and multi-faceted misery of “Constant Soul Corrosion” (which bears one of the best song titles I’ve seen this year so far) echoes the agonised artistry of Sweden’s arch-provocateurs Shining, but with a heavier, more densely metallic vibe of tortured introspection and extravagant aggression, where strange, eerie melodies wind and slither through the shadows cast by blazing leads and monolithic riffs.

“Cortical Spreading Darkness” intertwines neck-snapping riffage with moments of chilling clarity, its haunted hooks insinuating themselves into your brain with insidious, creeping menace, while the ghost-like instrumental “Fractal Rise Of The Fall” brings together majesty and misanthropy in equal measure.

The bleak beauty of “Inner Reflexion” is matched only by the near-unrelenting depravity of its visceral riffs, whose fading embers lead into the impulsive chords and nerve-wrenching melodies of “Devouring Darkness”, a noxious concoction of ravenous animosity and choking depression, pierced by a series of fantastic, fleet-fingered lead parts and solos. The album closes with the driving riffs and toxic auroras of “Origin”, an expulsion of rancour and depravity set to a soundtrack of focussed metallic mayhem designed to twist and torment the emotions until they break.

The beautiful, unforgettable cover art embodies the album so well – this is music from the darkest depths of the human mind, a black, malignant tumour of pain and anguish which spreads its tendrils widely to encompass a host of dark emotions and warped musical influences, creating a truly immersive, unforgettable experience.

The Reflecting Void will be released by Debemur Morti on April 25 (and May 13 in North America). 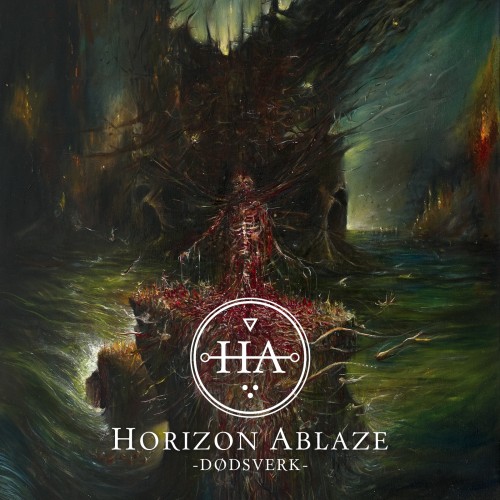 Horizon Ablaze are one of those artists who are (seemingly) difficult to classify. I’ve seen them referred to separately as both “Black Metal” and “Death Metal”, as well as simply a more general “Extreme Metal”. Personally, if I was pressed, I’d lean towards calling Horizon Ablaze Blackened Death Metal (genre tags, eh?), but an incredibly individualistic, unconventionally creative, and unpredictably complex variant on the style.

The suppurating psychosis of “Nekrosis” is the first indicator that Dødsverk is going to be a rough ride, tearing free from the womb into the ravenous reptilian frenzy of “Leviatan”, all angular, scaled riffage and cold-blooded, murderous rage. In many ways it’s one of the most straightforward songs on the album, despite the fact that its swarming multitude of riffs are as gnarled and tangled as a coil of broken barbed wire.

Much less straightforward are songs like the dissonantly atmospheric “Fordomt”, where the desolation of Blut Aus Nord crosses paths with the devastation of Zyklon, and the cryptically rhythmic “Domt Til Frihet”, whose vertigo-inducing contortions come across like the bastard child of Cryptopsy and Mayhem.

In lesser hands this melding of elements and influences might seem incongruous and unwieldy – but here they flow like streams of molten metal, forming a newer, stronger alloy, unbreakable and untouchable, blacker than night, swallowing the light.

In many ways this album reminds me of Emperor’s eternal swansong, Prometheus, in its refusal to be bound by convention or limitation. Thus the jagged rhythmic riff patterns of “Skjaersild” can suddenly and seamlessly shift into a piece of mellifluous clean guitar work, backed by an unexpected, rippling blast-beat; or the malevolent power of “Svarte Flammers Aske” can be augmented by an irresistible clean vocal hook which soars above the grim riffage and guttural growls with melancholy majesty.

Wilfully difficult and purposefully different, the album closes with the discordant beauty of “Avskjed”, whose fluid acoustic melody provides a keen counterpoint for an anguished torrent of angst-ridden vocals, this disparate pairing – the beautiful and the bestial – providing one final, perfect example of the band’s enigmatic and contradictory nature.

It’s not an album that you’ll necessarily get straight away. But it’s the sort of album that will no doubt have a profound impact on a very special few.

Dødsverk is out now on Aural Music. To give you a sense of the album, we asked the band’s label for permission to stream one of its songs, and they graciously agreed. Listen below to “Skjërsild”.