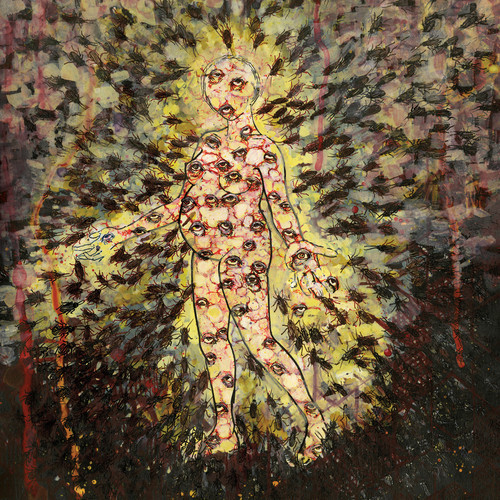 (In this post BadWolf reviews the new album by Pyrrhon.)

Let’s talk about PR for a moment. Brooklyn outfit Pyrrhon have a pretty darn good PR outlet—one of the best when it comes to metal, in fact, and even they are having trouble pitching the band’s new album, The Mother of Virtues. In one email, they described the record as “Investigational Death Metal,” which is a patently ridiculous descriptor. First, how can music be investigational? I read it and think of True Detective, not riffs and blast beats. It isn’t as if listening to Pyrrhon will answer any mysteries in your life. In fact, it’s more likely to raise some serious questions, if you’re willing to listen. Second, I’m not entirely sure I’d call Pyrrhon a death metal band.

Which isn’t to say they’re doing a bad job. Quite to the contrary, Pyrrhon’s sophomore LP is earning rave reviews, and will probably end up on quite a few year-end lists, as well it should. The issue is that Pyrrhon’s sound is so out there that succinctly describing it is difficult.

It’s a difficult task for me, in particular, because Pyrrhon’s vocalist and lyricist, Doug Moore, is a friend, as well as my supervisor at Invisible Oranges. The details of our relationship, and a more in-depth disclaimer, precede my interview with Moore. 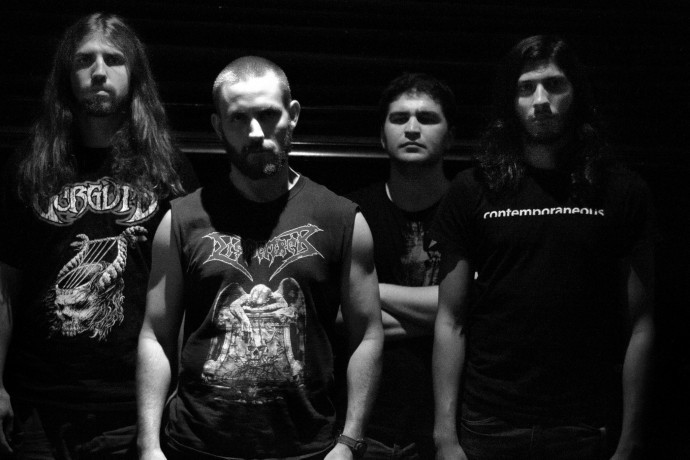 Roughly, Pyrrhon fit into the contemporary style I think of as “Depressive Technical Death Metal.” It’s a chic way to play music at the moment, considering the amount of critical acclaim bands like Portal, Gorguts, and Ulcerate receive. Pyrrhon’s music resembles those bands to greater (Gorguts) and lesser (Ulcerate) degrees. However, on The Mother of Virtues, these four young musicians have pushed the style into the outer limits of extreme metal. Guitarist Dylan DiLella proves himself to be a versatile and creative player, capable of smooth, jazzy arpeggios as well as polyrhythmic chugging. At times his pension for creepy atmosphere and dissonant jazz intonation reminds me more of Deathspell Omega than anything.

Unlike their contemporaries, however, Pyrrhon are more than willing to slow down and open their songs up, allowing the absence of sound to have as much impact as their volleys of noise. On songs like “Eternity In A Breath,” for example, the sound recedes into tribal doom reminiscent of Neurosis for most of the track. In these more open moments, drummer Alex Cohen, also clearly a talented musician, employs many supple cymbal fills, suggesting a background in jazz fusion. They also push the bass to the front of the mix. Bassist Erik Malave alternates between fingering and picking his strings, but his instrument carries a big, percussive, and metallic tone.

The Mother of Virtues is a lot to digest. It’s a long record, sporting three songs that circle the ten-minute mark, and several shorter, more intense tracks. As a seasoned death metal lover, I still have trouble getting through it. As per the norm from modern-day Brooklyn, the album sounds live, dry, and lovably imperfect, which just makes the jagged zigs and zags between songs all the more nerve-wracking. This is an album that opens with a grind song (“The Oracle of Nassau”) and then goes into “White Flag,” something which sort-of resembles early Swans — it wants to catch its listeners off-guard. It presumes that its listeners know a lot about extreme metal, and is designed to deny the typical extreme metal moments of satisfaction. There are no hooks, no big fist-pumping moments.

Which is why The Mother of Virtues is not death metal. There is no slaughter in the sound. Death is a certainty, but Pyrrhon present the opposite: This music is the codified sound of pure anxiety. Too bad “Existential Crisis Metal” doesn’t sound like it would sell too many albums, either.

Special note must be made of Moore’s lyrics. In short, they are among the best I’ve heard from an extreme metal band, the perfect tonic for gory Cannibal Corpse silliness. In his literary allusions, and his way of molding reality into snippets of language, he’s as good as Cormorant once was. In a way, Moore reminds me of the raw, naked misanthropy that made early Ministry so special. He does, as Jorgenson did at his best, embody the urge for justice that one knows can’t ever really exist, the horror of knowing too much, or rather, just enough to realize just how cosmically fucked you really are. The knowledge of the precise issue of the terminal disease, but no insight as to the cure. Horror writer Thomas Ligotti once said, “No intelligent man ever called himself a nihilist.” I’m sure Moore would reject that crown as well, but there’s no denying that these lyrics are among the most bleak you will read. Too much Pyrrhon makes me want to step into a cold bath and open a warm vein in a way Shining could never hope to do. In a way, this is the pragmatist’s take on Lovecraft: we don’t need cosmic horrors to destroy our minds, the sheer nature of reality is enough.

At the same time, Moore doesn’t really have the dickish punk attitude Jorgenson did. Fragmented though they are, Moore’s lyrics strive for compassion. On “The Oracle of Nassau,” for example, he ponders the ravings of a homeless, probably mentally ill person. More impressively, the song “Invisible Injury” is sung from a woman’s perspective. Twenty years ago the cutting edge of death metal was finding more and more gruesome ways to disembowel women. Now, with Pyrrhon, the game is to embody how gruesome it is to simply be a woman in a man’s world. Compassion will drive you fucking batty, too.

Relapse Records took a gamble in signing Pyrrhon. Describing their music is difficult, and making it sound palatable is near-impossible. Then again, that’s probably what Americans thought the first time someone returned from Japan and tried to describe sushi. Nowadays sushi is big business. Will Pyrrhon be the next Slayer? I doubt it. Their music is too mercurial and obscure for most listeners to unravel, and once it is unraveled many will turn away from the message within. Progress is hard for people to take, but Pyrrhon is progressive in the truest sense. The band’s willingness to fuck with extreme metal genre conventions while maintaining discipline reminds me of Meshuggah’s four-dimensional take on thrash. Then again, Meshuggah’s about to play Bonnaroo. Sometimes people like progress. Get on the Pyrrhon train sooner, rather than later. I’m glad I did.

The Mother of Virtues is out now and available for order here, as well as via most digital platforms. The album can also be streamed and downloaded at Bandcamp, which is how you’re about to hear it.

9 Responses to “PYRRHON: “THE MOTHER OF VIRTUES””