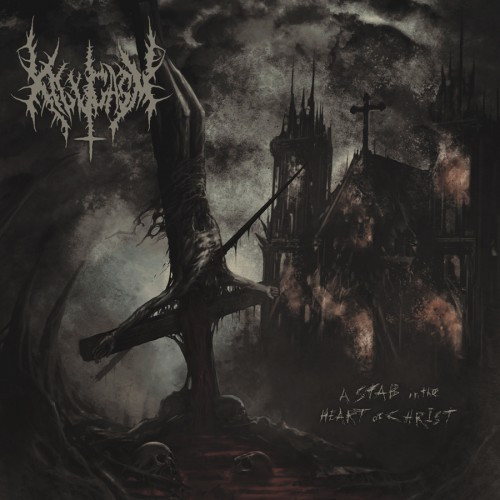 When I think about metal that delivers unbridled feral explosiveness, two of the genres that come to mind immediately are grindcore and the kind of fast-paced black metal that’s ripping and ravenous. Now, think about combining those two styles of mayhem. That’s what Sacramento’s Killgasm have done on their forthcoming album A Stab In the Heart of Christ. It’s music that will leave you bleeding from all the orifices.

This is the blasphemous trio’s second album, following their 2011 debut Bloodbath of Satanic Vengeance, and an assortment of previous EPs and splits, as well as last year’s single, “High On Church Fumes” (which also appears on the new album). Today, we’re giving you a taste of the rapacious fury that the new album delivers with our premiere of its third track, “Revenge of the Panzergoat”.

The title of the song gives you a pretty good clue as to what’s coming. It’s like a panzer tank assault — except faster and more satanic. Galvanizing tremolo chords and unhinged shrieks blast open the song right from the beginning, and there’s no let-up after that. The dark, writhing melody succeeds  in worming its way into your cranium, while the militaristic drum attack seems determined to punch holes through your abdomen. It’s take-no-prisoners music, but the first thing I want to do after hearing it is play it again… and again.

A Stab In the Heart of Christ will be released by Moribund Records on May 28. The cover art is by Rafael Tavares. For more information, check out these links.

Here’s “Revenge of the Panzergoat”, and below that you can listen to the previously released tracks “Humanity In Ashes” and “High On Church Fumes”.

7 Responses to “AN NCS PREMIERE: KILLGASM — “REVENGE OF THE PANZERGOAT””