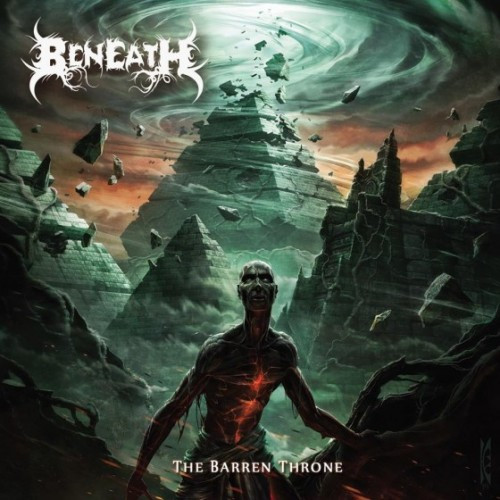 (TheMadIsraeli reviews the new 53-minute hell storm by Beneath from Reykjavik, Iceland.)

Unique Leader has just been hitting it out of the fucking park lately with tech death.  We premiered the first single from Beneath’s sophomore album The Barren Throne — “Chalice” — about a month back, a slab of utter blackness and crushing weight that harkened to bands like Suffocation, Hate, and Hate Eternal.  Now it’s time to review the full album itself, and I’ve come away thoroughly pleased and impressed.

The three names I dropped are pretty accurate suggestions of the sound that Beneath channels.  The riffs are razor-edged, reservedly technical in that Suffocation style of just enough but not too much, with the speed and majesty of Hate, and Hate Eternal’s sense of chaos and dissonance.  In a sense, Beneath deliver the ultimate 90’s-and-onward death metal sound.  It’s perfect in its execution.

Tuned to B for brutal and approaching their sophisticated brand of tech death with restraint and precision, The Barren Throne is a destructive monolith of death metal excellence.  The drumming is quite varied and busy, the riffs span the scope of the death metal circuit from tremolo-picked riffs, to the technical and noodily, to the meaty chunk, and so on.  What Beneath do especially well is pulling off their own interpretation of Suffocation‘s pseudo-melodic aspect.  They also build quite a bit of drama in their music, in the tradition of Hate as well as Suffocation.

Opener “Depleted Kingdom” boldly shoves that sense of dramatic composition in your face immediately with a lengthy clean intro reeking of a despairing yet disturbed nature.  The song’s post-intro central riff is a melodic one that nonetheless stabs the listener. It has a very Wagnerian quality about it, as does the whole song.  The band dance gracefully between neo-classicism and dissonance in a way that the best tech death bands seem to know how to do, and the way Beneath does it sticks out particularly amongst the members of the Unique Leader roster.  Easily one of the best album openers of the entire year.

As a sub-genre of metal, tech death is above all else one in which the guitar is definitively and undeniably the most important.  Ever since the field began to produce bands who took a more technically definitive and deliberate approach to their music, such as Suffocation, Dying Fetus, Martyr, and Necrophagist, tech death has become the ultimate epicenter of technical showmanship combined with classical-composer caliber writing — assuming, of course, that the band know what they are doing and understand the style.  Beneath definitely prove that they understand this as The Barren Throne marches onward.

“Chalice” is a merciless meat-grinder of organ-feasting levels of carnage.  Driven by punctuated riffs with the hook-based flavor of Behemoth/Hate, it was a flawless choice for a single to represent the record.  The title track is a waltz-driven blackened blitzkrieg that suffocates all life in a cloud of black soot and acid rain.

“Putrid Seed of Affection” is a blazing, eviscerating barrage of machine-gun fire, driven by rapid-fire riffs full of schizoid twitches and equally unrelenting drum work.  It also includes one of the catchiest choruses on the album, for as much as a tech death chorus could ever be catchy.  “Iron Jaw” is a grinding war march, punctuated by rounds of frantic artillery fire in the form of tremolo-picked fretboard shredding and piston-power blast beat assaults.

“Sovereign Carnal Passion” sees the band slow down a bit, to a mid-paced hulking slab of mostly melodic misanthropy at its beginning — lots of thick guitar harmonies, and depressive in nature.  The technical wizardry starts back up again, with a main riff that relies on low to high-ended stabs that make you feel like your brain is being skewered over and over again.

“Sky Burial” is a truly magical moment on the record, and an interesting break away from the standard operating procedure, one that solidifies the scope of Beneath’s songwriting.  It’s a doom-driven melodic death metal song in the style of Daylight Dies and In Mourning, and it serves as one of the album’s definitive highlights.  It may be my favorite song, in spite of the high quality carnage the rest of the record contains.  (I have to admit, I got stuck on this song while writing this review.)

The final volley of the album’s last four songs is a non-stop gauntlet of high-speed flesh-flayers.  “Veil of Mercy”, “Mass Extinction Codex”, “Storm Drainer”, and “Unearthed” are all focused on bringing technical riffage to the forefront, with extremely straightforward composition.  It’s like a final adrenaline rush before a crazed soldier on a combat high lands the killing blow on a target.  All high-quality stuff — the band have reserved some of the best lead work on the record for this final quartet.

The mix is also superb, but distinctly in line with other members of the Unique Leader roster who have a trend of preferring very earthen mixes, with granite guitar tones and meticulously balanced drum tones.

I really enjoy the riffing sensibilities of this album, as they combine a lot of schools, a lot of sounds, with an impressive grasp of both atonal and melodic concepts.  Beneath’s guitarists also place an obviously high value on memorability, because a lot of this album gets stuck in your head.  The band’s new vocalist Benedikt Natanael Bjarnason is also an impressive force on the mic, with a powerful, refined, lower-end growl that consistently fits the band’s music, although I have to say that when the band is at their most melodic is when his vocals gel the most.

The Barren Throne will be released on April 29 and can be ordered here.

8 Responses to “BENEATH: “THE BARREN THRONE””