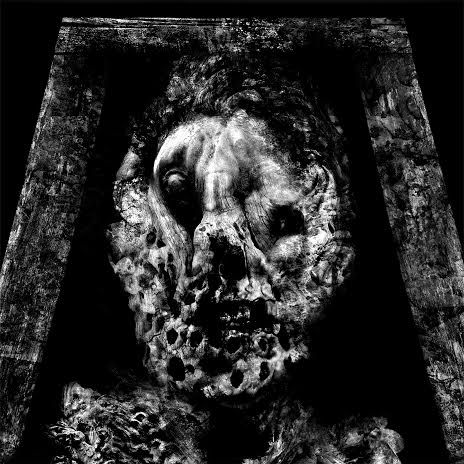 After seeing Obscura live a number of years ago with new (at the time) bassist Linus Klausenitzer in tow, I curiously checked after the show (where “Ocean Gateways” blasted my butthole apart and I was the lone idiot screaming and growling along to each song) to see what else he had done, and in doing so stumbled upon Noneuclid and their outstanding debut, The Crawling Chaos. After a long 8 year wait, they’ve finally followed up that album with the release of Metatheosis, an effort that further builds upon, bends, and blends the foundations and experimental defiances of tradition they previously established. Metatheosis, at a towering 67 minutes, is not a record for everyone. Which is to say it hits the right mixture of weird, wonderful, and wounded, in a graceful interconnected trifecta that will intrigue just as many people as it will repulse.

This is a testament to the fact that they’ve had the balls and vision to really go for it, to craft a specialized sound that is a hybrid you will either become hypnotized by or unable to connect with. Ambitious music like this exists not for the purist who will be confused by it, but for metalheads craving that new sound that hits all the sweet spots in a way they haven’t heard before.

To classify Metatheosis overall, one could say that it falls into the realm of thrash, while avoiding the trappings and limitations of the retro-thrash movement. The progressive thrash base of Noneuclid comes across like Watchtower and Voivod meet Metallica and Slayer. Aided by the incorporation of ravenous death metal shrouded with black touches, the music also embraces a despairing sense of doom with orchestral and acoustic threads woven into the tapestry. Noneuclid’s merger of styles comes across as quite unorthodox and avante-garde, and in the end they never quite fit anywhere, they are simply Noneuclid, and their approach is all their own.

One might also be tempted to characterize the music as thrash/death, but this isn’t thrash with a death metal bite, nor is it death metal that gallops and is guided by thrashy outriders. This is a full-on science experiment, muddling the two styles into contrasting, coalescing forms that are inseparable yet elastic. From thrash, they cycle to prog, demolish with demented death metal, and collapse into doom — all of which has been done somewhere before, but not in this order, nor composed with these ingredients amorphously clustered and countering each other in the way they do here.

Lots of classic thrash choruses appear throughout, with some singing and spoken-word parts mixed with thunderous deep growls, too. Speaking of the vocals, apparently Bruce, the thrash vocalist on Metatheosis, is no longer in the group, so the next album after this one will be primarily growled by guitarist Morean, who is also in Dark Fortress. In fact, two more members of Dark Fortress also perform in Noneuclid: The well-known V. Santura (also Triptykon) on guitar, and drummer Seraph. But this is far from Dark Fortress material overall, save for some of their uniquely twisted black and death ideas swirling in the midst of the album’s raging thrash storm.

Dissecting the complexities of this album track by track would be superfluous, though there’s certainly a structured flow to Metatheosis. The first two tracks are overwhelming thrash, though with the aforementioned other genres sewn in carefully. Then track three, “Buried Forever”, favors a doomy death metal path and variation on their sound. From there, the album hits a highly progressive middle movement starting with the next track, “Across The Mist Of Broken Glass”, and continues to greater heights on the three-song “Into The Light” series that follows, further developing the band’s futuristic metal recombinations within a more experimental and theatrical context.

Following that are the lumbering-meets-choppy death/thrash one-two punch contained within “The Black Plague Of The Soul” and “To The Zombievores”. Both are distinctly groove- and chunky-death-metal-flavored songs that bring to mind a cross between Morbid Angel, Metallica, and Cannibal Corpse.

The title of closer “None So Lucid” seems to be a parody of Cryptopsy’s album None So Vile, but musically it couldn’t be further from it. It’s a mammoth progressive piece that is epically composed and a fitting way to send off the album. It’s 16-minute run time covers a lot of ground, utilizing clean singing and big hooky grooves to build up things nicely, before moving into murky speed-addled deathly black shadows, and finally succumbing to its own madness in a spiraling descent to the end.

Re-thrash has its place as temporary fun, but Metatheosis is a work of higher art with a longer shelf life. Noneuclid improbably reach into the past and freshly distill and recombine what they unearthed in an adventurous way that is not limited to thrash alone. When bands like Noneuclid take thrash to such new and challenging heights, can we really say that thrash is played out?

Metatheosis comes out May 6 on Blood Music. Pre-order physical copies here. It will also be available as a name-your-own-price digital release via Bandcamp (digital pre-orders are available now). You can hear three songs below, and the entire album is exclusively available for streaming at Metal Sucks via the link below.