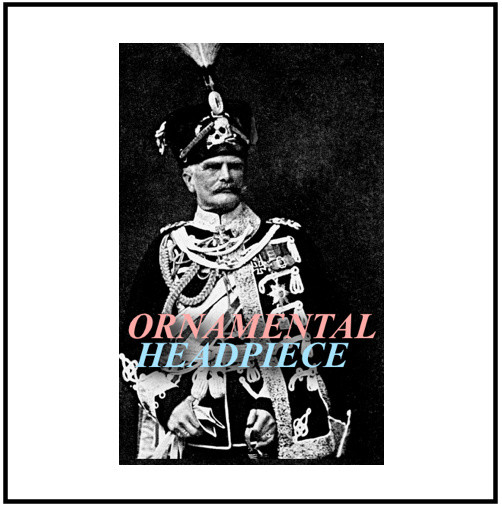 I chuckled when I first saw the name of this band, and then chuckled more volubly when I saw the cover of their debut EP, Masks of Ash. That is indeed one hell of an ornamental headpiece. Someday maybe I’ll find out how they picked their name, but of course what really counts now is the music, and Masks of Ash is awfully good.

The band’s membership is somewhat obscure, though it includes Damian Master (aka Deathless Maranatha of A Pregnant Light and Dukula Menelek of Aksumite), as well as one or more people from a band named Citizen and another from Detroit named Freedom. For me, Master’s presence made the EP immediately worth checking out — and I was hurried along in doing so by NCS supporter Utmu.

The four-song offering only lasts about 11 minutes total, but it’s a compelling 11-minute ride. The dominant style is black metal — on the raw, blasting, lo-fi end of the spectrum — but there are other ingredients in the mix as well.

The first song after the intro, “Myth Guardians”, tag teams the blasting with d-beat punk. “Boots On the Ground” incorporates heavy-booted mid-paced stomping and a surprising interlude of ringing melodic guitars and a tumbling drum progression. “Candle Holders” is another mid-paced number, built on an absolutely killer (and quite dismal) riff, while reverberating guitar notes punctuate the sonic warfare in “Detachment of Rats” before the song devolves into a squalling storm of vicious noise.

Lyrically, the songs are devoted to the horrors of warfare, and they’re worth reading if only to enable you to do what you’ll want to do — which is howl along with the distorted, maniacally rabid vocal excretions that rend their way through the music.

People who prefer their metal on the clean, crisp side will probably shy away from Masks of Ash, but for those who want their heads wrecked by some damned fine riffs and have a taste for lo-fi abrasion, this EP will be a wonderful find. Heads will bang, and the music’s grim melodies will get their hooks in, too.

A special thank-you again to Utmu for prodding me so hard to listen to this EP, and to CVLT Nation for getting Utmu interested in the first place. Masks of Ash is out now on tape via Master’s Colloquial Sound Recordings (here) and it’s also available for download from Bandcamp, which is where I bought it. You can also find the lyrics at the Bandcamp page:

4 Responses to “SHORT BUT SWEET: ORNAMENTAL HEADPIECE — “MASKS OF ASH””