(In this post TheMadIsraeli delivers a review of the new, second album by the UK’s Vallenfyre.)

I’ll admit to it.  I haven’t been writing ’cause of a video game.  Dark Souls 2 in particular.  Now that I’ve had my complete fucking burnout on the game, I felt motivated to get back to metal and metal things.  The new Vallenfyre album was a surprise waiting for me in our Dropbox and it pretty much called me like a siren to listen.  I loved their debut (I bought it after reviewing it) and looked forward to another helping from these death-doom denizens of pestilence.  As things turned out, having played Dark Souls 2 worked completely in my favor because it allowed me to encapsulate Splinters perfectly.

There is a monster in the game called The Rotten, a golem composed entirely of corpses held together only by a consciousness that seeks to give shelter to the thrown-away and unwanted, whether they like it or not.  The helpless victims are butchered and added to The Rotten’s mass, forever prisoners to his sadistic sense of being the shepherd to a flock of sheep.  One of the key aspects of the Dark Souls universe is that humans cannot die; they are merely resurrected in a zombified state while retaining all of their mental faculties, making The Rotten essentially a prison built from living yet decaying, rotting corpses.

Vallenfyre on Splinters pretty much embody that.  They forcefully absorb you into the mass of corrupted defilement they have created, and use your very life force to feed their ability to function.  This results in a sound that is overwhelmingly putrid, filled with Swedish buzz-saw guitar tones, dragging doom, carpet bombs of blast beats, titan-sized riffing, and utter despair. 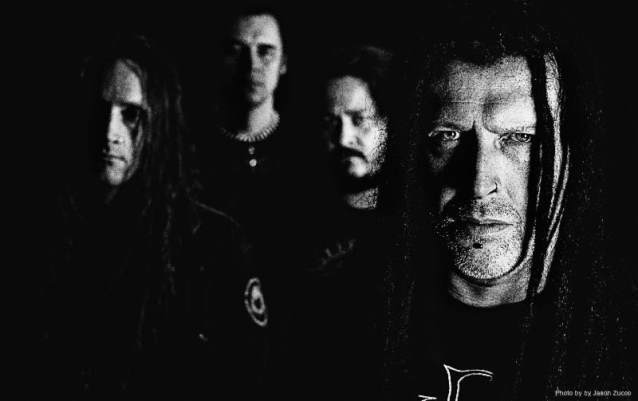 While Splinters is an explosion of all-consuming power, it is also (counterintuitively) frail and conveys the feeling that it’s actively dying, wilting away.  This characteristic is what seals the doomier aspects of the album, especially with a guitar tone that seems purposefully dialed in so that it does not sustain well over time.  When notes are rung out, you can hear the guitars wilting out of focus and the tone dying out. It’s an intense vibe, much in the same vein as the Triptykon record released this year.

That never stops the music from being an organ-destroying sledgehammer, though, and when the speed kicks in, fuck me if this isn’t old-school death metal at its most brutal and titanic.  The opener “Scabs” is a damned freight train that reaps the souls of the living after the bodies have been obliterated from the impact.  It may be the most brutal song Vallenfyre have ever made as far as straight-up getting fucked is concerned.  By contrast, “Bereft” is an interesting morose slog through doom aesthetics that epitomizes the dying feel I mentioned in the guitar tone.  Its melody is depressive in a way reminiscent of Mournful Congregation, which is always welcome.

If you liked the debut, this is the debut but intensified times ten.  It’s an undeniably flawless album, especially for those who like their death/doom to be of the Swedish buzz-saw variety.  Splinters is straight-up volcanic desolation at its finest.

Splinters will be released in NorthAm on May 13 by Century Media (pre-order here), and you can hear two tracks from the album below, one of which we had the pleasure of premiering. For a track-by-track discussion of the album, check out our interview of the band’s Hamish Glencross at this location.