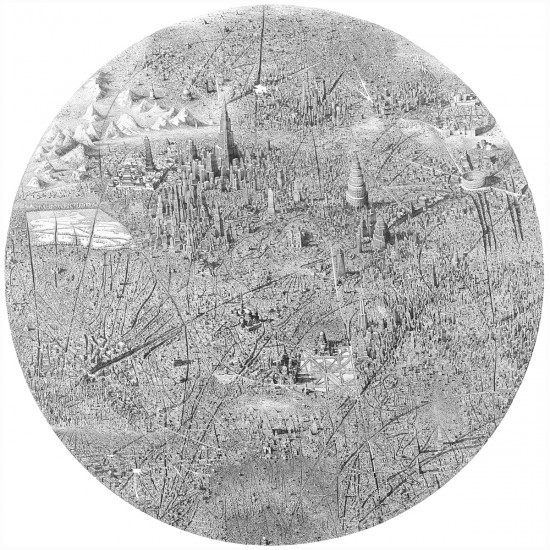 Welcome to another (long-delayed) edition of THAT’S METAL!, in which I present images, videos, and occasional news items about events that I think are metal, even though they having nothing to do with metal music. For this installment I’ve collected a whopping 10 items.

As usual, I begin with an image, the one you see at the top of this post. It’s a drawing entitled “Single Note” made with pen and ink by an American artist named Ben Sack. The diameter of the original is 4 feet and the circumference is 12.5 feet.

Clicking on the image will allow you to see a larger version, but even that won’t reveal the astonishing degree of detail that Sack meticulously created, incorporating a variety of architectural styles both ancient and modern (and some that have never existed except in the imagination). Perhaps equally humbling is the fact that Sack is only three years out of college. Here are a couple of enlarged details from “Single Note”: 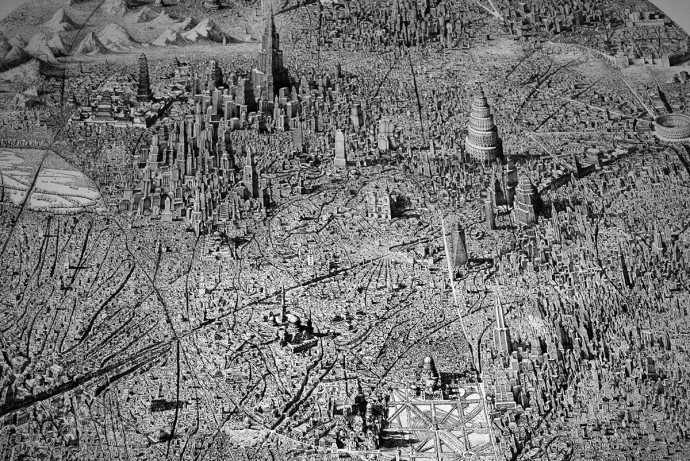 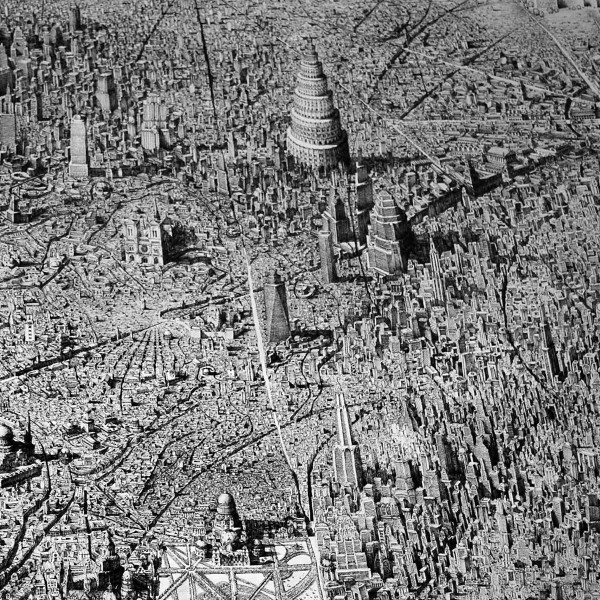 And here are two more of Ben Sack’s creations: 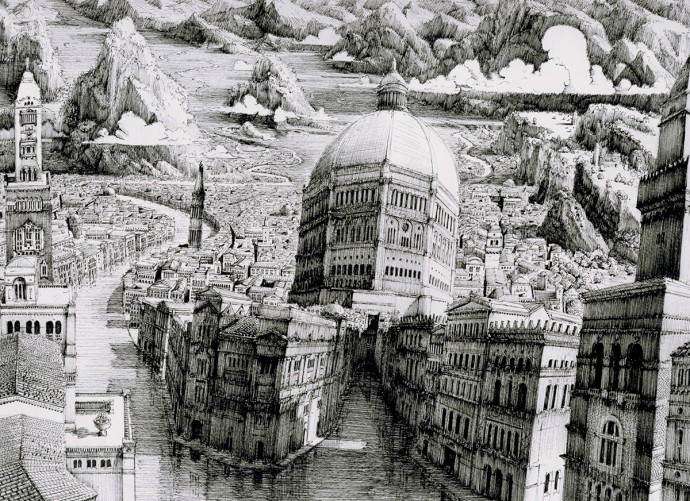 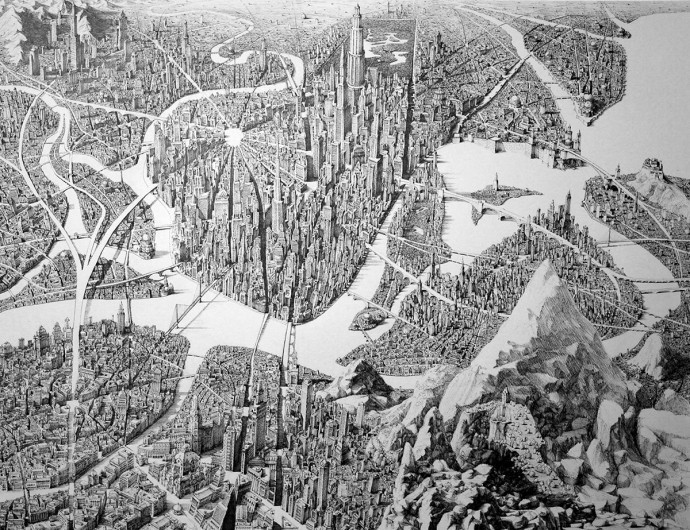 Finally, here’s a video that Sack made about the creation of “Single Note”, using roughly 3500 individual photos of the work, set to the music of “Danse Macabre” by Camille Saint-Saens. Sack’s web site is here; prints are available at this location. 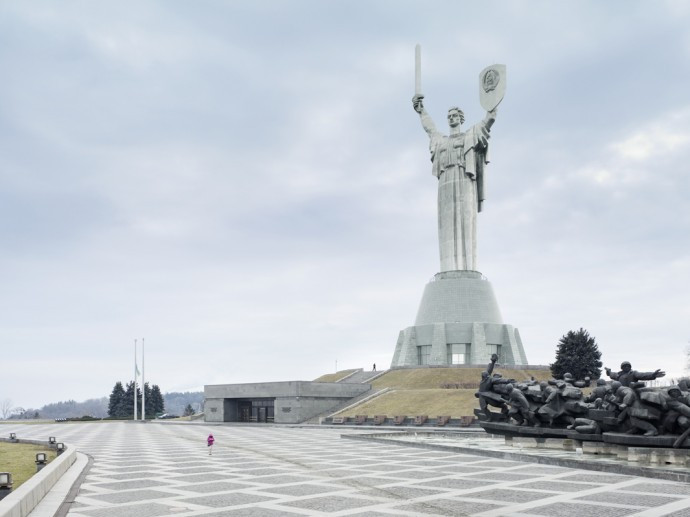 Speaking of artistic and architectural achievements, we’ll move now from the minute and the meticulous to the gargantuan.

Fabrice Fouillet is a Parisian photographer who, in addition to doing studio work for well-known magazines and newspapers, has made a series of photos called “Colosses” that depict political, religious, and ideological monuments from around the world on a grand scale. The astonishing enormity of the statues is underscored by the way Fouillet framed them within their surrounding environments — and with puny humans visible, as a way of showing the scale and (in Fouillet’s words) “the opposition of the lasting and the living, of the stone and the flesh, of power and vulnerability”.

The statue shown above was erected in Kiev, Ukraine, in 1981. The title is “The Mother of the Fatherland”.  Here are two more examples. Fabrice Fouillet’s web site is here. More of the photos in this series can be seen here. 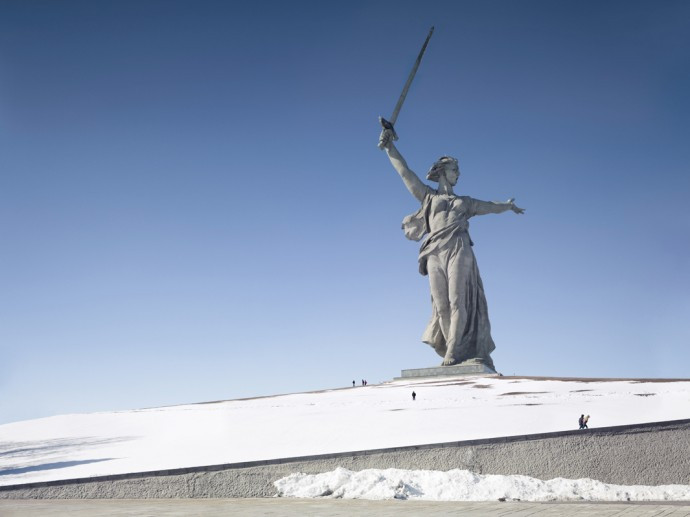 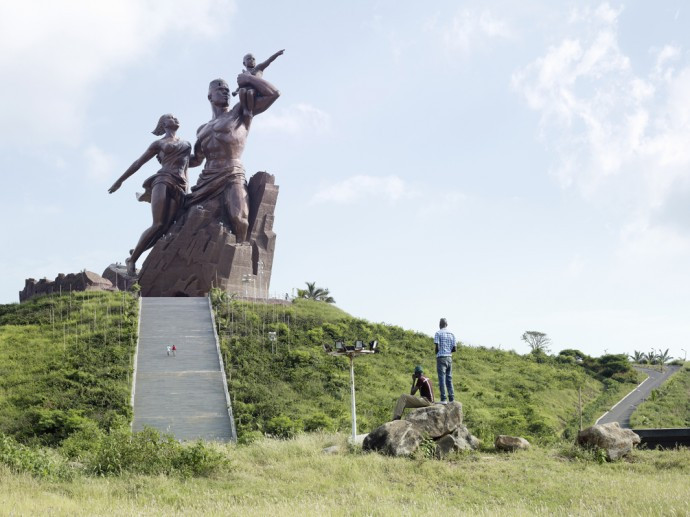 Let’s stay with photographic art for one more item.

Ole C. Salomonsen is a dedicated landscape photographer located in the arctic, in Tromsø, Northern Norway. “Silent Storms” is a film he made using primarily still photos he took in Norway, Finland, and Sweden (but primarily around the Tromsø area). Two of the sequences are real-time video (03:17 and 03:38). He’s obviously a very talented photographer, but he was greatly assisted in this video by one of nature’s most stunning phenomena. Seeing this with my own eyes is high on the bucket list.

Jaw-dropping art can take many forms, even when, at its core, it involves trickery (and showmanship).

According to The Font of All Human Knowledge, “Ricky Jay, is an American stage magician, actor, and writer. He is a sleight-of-hand expert and is notable for his card tricks, card throwing, memory feats, and stage patter. As an actor, he is known for his roles in the films Heist, Boogie Nights, and Magnolia, as well as on the acclaimed HBO series Deadwood.”

And that’s all the background you get for this next very impressive and very entertaining video. 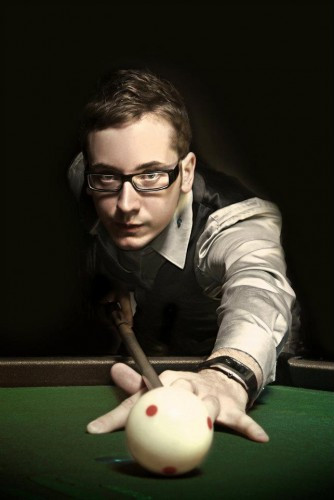 The next video also features astonishing tricks, but not deceptive ones.

I have to believe that the gob-smacking feats captured in this little film required multiple takes, but even if Florian ‘Venom’ Kohler couldn’t repeat some of these (though he can and does), it would still be remarkable.

This video is only part of a 49-minute DVD entitled Venom Trickshots II that apparently documents a world tour by Kohler that spanned “9 countries, 5 weeks, and over 300 trick shots [from] the casinos of Las Vegas to the mountains in China….”

Florian is a Frenchman, born in 1988. Dude has style as well as skillz. He has a Facebook page at this location.

Changing gears, so to speak.

As the author of the blog where I found this next item wrote, “You can’t spend all day learning things.  Sometimes you just need to lean back and watch a car vent.”

I don’t know why I found this so fuckin’ funny, but I did. YouTube commenters identified this vehicle as a Pontiac Trans Am.

Since I seem to have taken a turn for the ridiculous, I might as well stay there a while longer. By way of preface, I quote from the article where I first saw the video you’re about to see:

“German scientist Ingo Rechenberg discovered a new, acrobatic species of huntsman spider in the Erg Chebbi region of Morocco, according to a recent study authored by biologist and spider expert Peter Jäger. When threatened, the little arachnid (Cebrennus rechenbergi) actually flips itself out of harm’s way, earning itself the name “the flic-flac spider”.

“Though not strictly a biologist himself, Rechenberg works in the related field of bionics—the application of biological methods and systems to the study and design of engineering. As such, he’s developed a robot that mimics the flic-flac spider’s odd locomotion.”

I’m arachnophobic, but I still thought this video was cool.

(credit for the tip on this item goes to Leperkahn. More info here.) 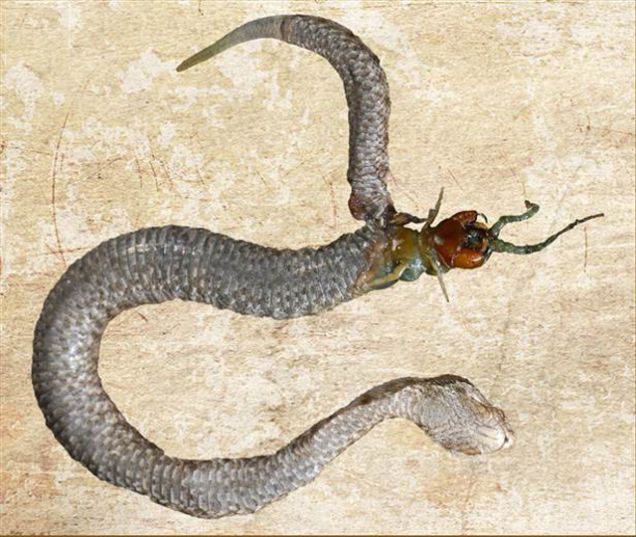 Serbian herpetologist Ljiljana Tomovic came across the disturbing sight documented in the photo above. Her conclusion is that this young, deceased viper snake had swallowed a centipede almost its own size and that the centipede then ate its way to freedom, through the snake’s body. To quote from the article from which I lifted the photo:

This is brootal and disgusting, which of course qualifies it as metal.

(NCS supporter Utmu sent me the link to the feature on this thing at i09. I thanked him despite the fact that it made me queasy.) 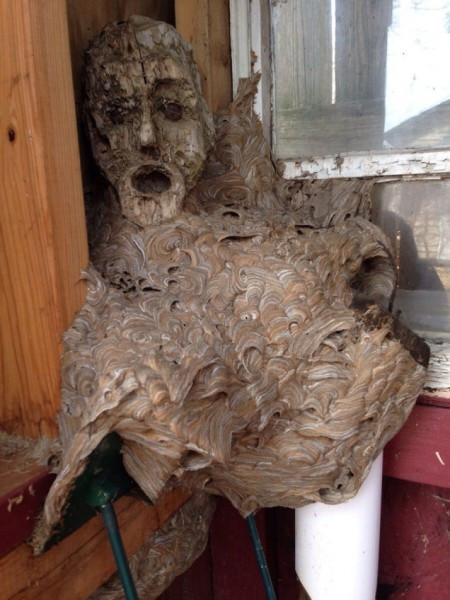 In a similar vein, here’s another item from io9, to which I was referred by my NCS colleague Andy Synn. This one gives me the creeps, too. As described by the photographer who took the picture, this is “an abandoned hornet’s nest my dad found in his shed that he hadn’t been in for a couple years. The head is apart of a wooden statue it fused with.”

And that’s all I have to say about that, other than “I hate wasps”. 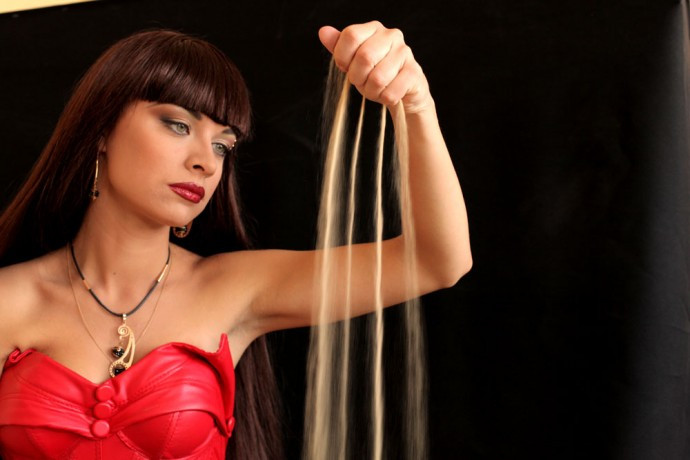 To wrap up this edition of THAT’S METAL!, let’s come full circle and return to something else that’s astonishing and sublime.

The star of this video is a beautiful Ukrainian woman named Kseniya Simonova (born 1985 in Crimea), the 2009 winner of the TV contest “Ukraine’s Got Talent” and a master at an art I never knew existed — sand animation. She’s also a mother and holds university degrees in psychology and graphics.

The following video shows her performance in the semifinal round of that Ukrainian TV talent show that she subsequently won. So that you’ll understand better why her performance brought tears to the eyes of some audience members, the subject matter concerned “The Great Patriotic War” of her country against Germany and was intended as a tribute to her great-grandfather, who died in the war in 1943. It tells the story of a young couple who were separated by the conflict, the mother and her child waiting for their husband and father to return.

Stay with this until the end, because just when you think she can’t top what you’ve already seen, she does — over and over again. Also, the music includes excerpts from a couple of Apocalyptica songs. The words at the end say: “You’re always near”.