To help start the new week, here are some new songs and related news that I came across over the weekend.

The Czech band Master’s Hammer began recording music in about 1987, with a 14-year hiatus between their third album in 1995 and their fourth one in 2009. Their sound evolved over those many years. In Darkthrone’s biography (here), Fenriz has referred to the band’s debut album Ritual as “actually the first Norwegian black metal album, even though they are from Czechoslovakia”, but later releases incorporated wide-ranging styles of music, including folk and classical.

Yesterday Master’s Hammer released their sixth studio album, Vagus Vetas, through the band’s own label, Jihosound Records, where it’s now available for order. Physically, it’s a very attractive release (some photos of the CD and the 12-page illustrated booklet that comes with it can be seen here), and it includes 12 songs. Unfortunately, I haven’t found any one of them on-line, but I do have a teaser video.

I also have a song named “Poletíme komínem” that the band recorded for a 2013 vinyl split with a band named Blackosh (the split is also available through the Jihosound cite).

The music on the teaser definitely has an avant-garde quality, but it’s also a hard-rocking drive. “Poletíme komínem” also pushes hard and fast, not dissimilar in style to what’s on the teaser (but with an odd combination of vocal styles). Digging it, too. 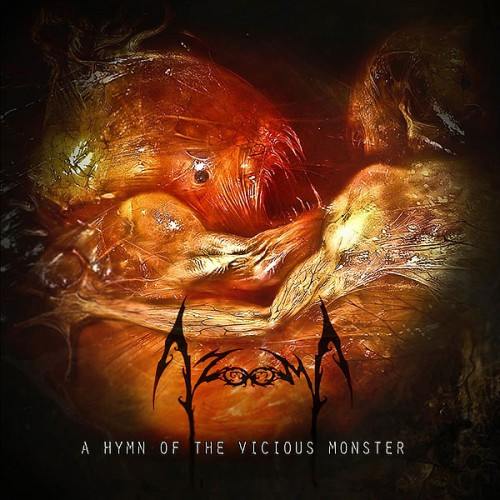 Azooma are an Iranian death metal band whose debut EP, A Hymn Of The Vicious Monster, is set for release on June 15 by Xtreem Music. I was drawn to the music, as often happens, by the EP’s striking artwork. It was created by Shahryar Shervin.

The songs on the EP were created as separate chapters in a story, explained as follows by frontman Shahin Vaqfipour:

A Hymn Of The Vicious Monster is about a normal person who seems to be a victim of the situations he is in, but eventually it becomes clear that if the conditions are right, he can turn into the monster which he thinks he is a victim of. It’s the nature of mankind. If he has the opportunities, he can turn into something evil which he thinks he would never be and do some vicious deeds. Everyone has this potential, but the true power and purity is not to let this nature, this essence grow.

One of the album tracks, “Chapter III: Encapsulated Delusion”, is now streaming on YouTube. Azooma bring the heavy thunder on this track, along with an angry hornet swarm of riffs and a sandstorm made of knives (plus some very cool bass and lead guitar work). This is mainly fast, flensing death metal with Suffo-style technical acrobatics and an Eastern melodic flavor — but the place in the song when the band slows the pace is just as cool as the firebombing. And the deep, demonic roars and ghastly howls add to the music’s destructive force. 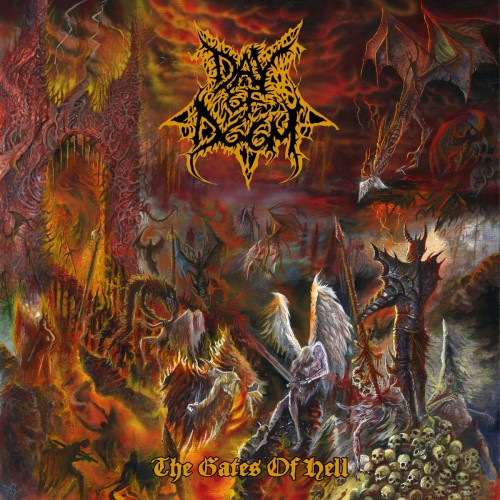 Day of Doom are from Long Island, NY, and the Czech metal label Lavadome Productions will be releasing their third album, The Gates of Hell, on June 6. Once again, I was induced to explore the music by the eye-catching cover art, in this case created by the Spanish artist Raul Gonzales, whose work we’ve featured before (and whose Facebook is here). It’s fantastic, and I encourage you to click the image above to see a larger version.

Two album tracks are now streaming on Lavadome’s Bandcamp page, where the album can also be pre-ordered.

“Slaughter of the Lamb” delivers a head-fake in its introduction before raining down a torrent of corrosive death metal filth — a storm of dissonant riffs, hammering slams, and fire-breathing solos set against a drum performance that judiciously picks its moments to erupt instead of blasting non-stop (I thought it was quite cool).

“Through Horrible Despair” doesn’t bother with misdirection — the band unleashes the devil hounds right from the start. It’s brutal and ravenous, but with surprises of its own in store, mixing in a phalanx of stomping anvil blows with the rain of blood. Cool.