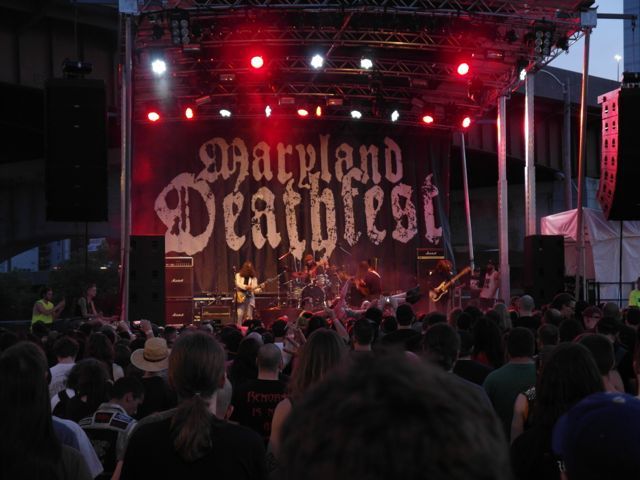 I’m already experiencing post-coital tristesse (yeah, look it up) after 4+ days of M D Effing.  I’m now sitting in the lobby of my hotel with my two Seattle friends killing time before we drive from Baltimore to D.C. for our flight back home. I thought I might as well take advantage of the lull and bang out some more thoughts about my Maryland Deathfest XII experience.

Although this was my first MDF, I gather from talking to people who had attended many of the previous festivals that the logistics of this one were the best yet. I know I was really impressed with everything. The biggest venue (and the one making its first MDF appearance this year) was the Edison Lot — just a gigantic parking lot in the shadow of an overhead freeway that MDF took over for the last 3 days.

It was more or less a huge rectangular space with two big stages set up at opposite ends. A smaller rectangular space was carved out by a chain link fence that ran the length of the lot, and that area was lined on both sides with small, open-air, tented booths, every one of them offering merch of different kinds — tons of shirts, vinyl records, tapes, CDs, patches, pins, posters, and more. At one end of that space was an even larger tent (which was almost fully enclosed) filled with many more merch tables: 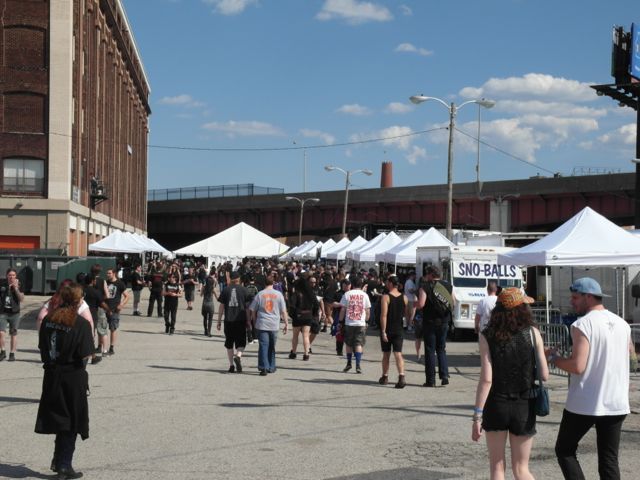 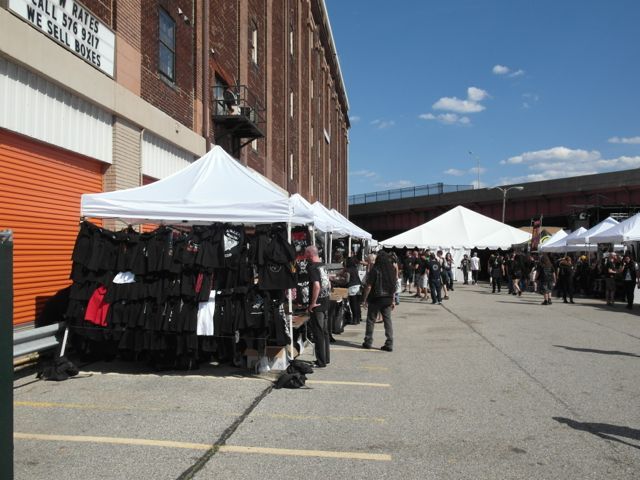 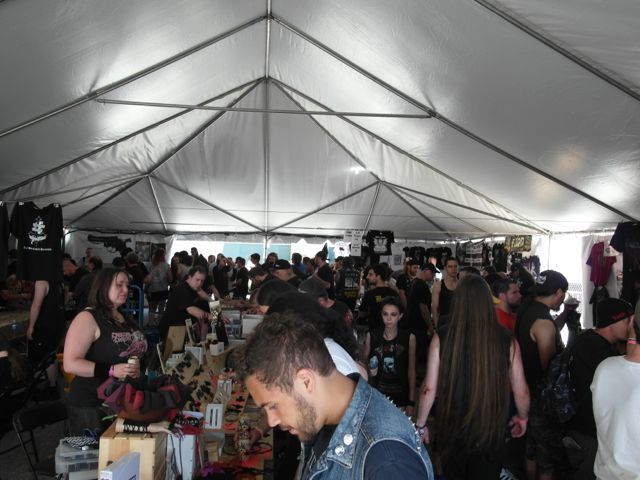 You could have spent many hours browsing everything that was available and still not seen all of it. The first time I went through there, the members of At the Gates happened to be sitting at the Century Media booth, individually signing posters that were being given away for free. I did a huge double-take and then got in line, shook hands with the band, and walked away with a poster for a Seattle acquaintance who is a die-hard AtG fan (who isn’t?).

The big space where the stages were located was also lined with concession stands selling beer, soft drinks, and water. Those were so plentiful that I never had to wait in line behind more than one person to get a beer, and most of the time I could walk right up to an open space with no waiting. 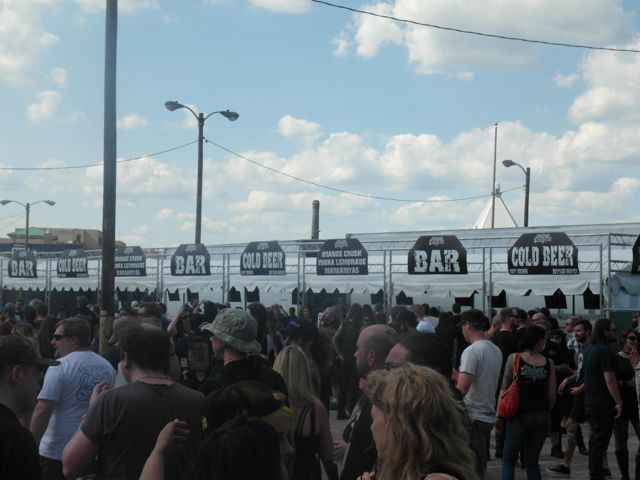 There were also several food concession stands. I drank a lot more than I ate, but one day I had a combo of fried rice, lo mein, and just-grilled chicken at a Thai-food stand, and another day I had a serving of stuffed grape leaves from a stand that served Greek food. It was all good. 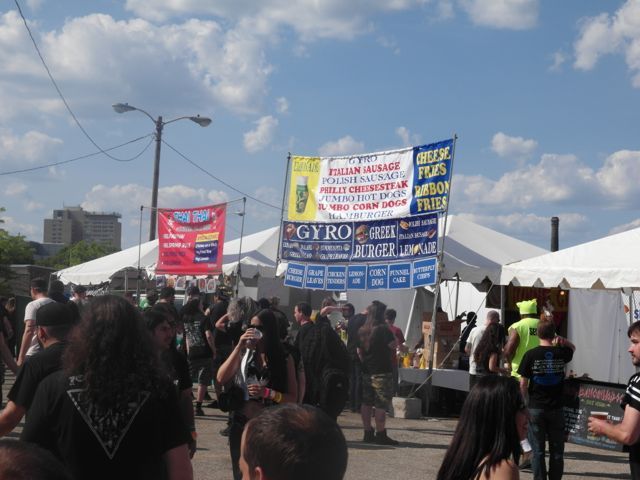 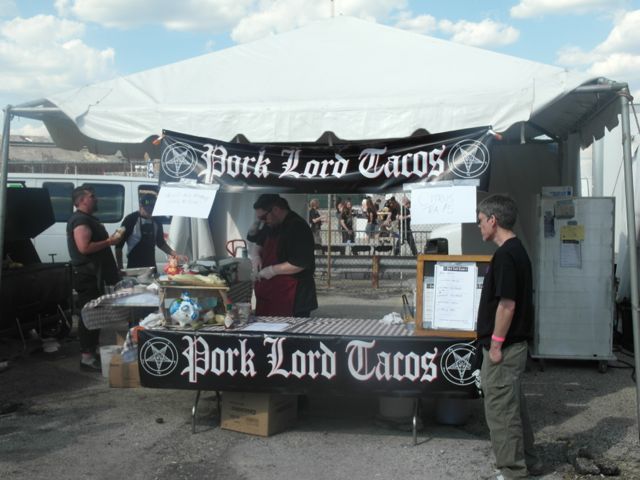 On Friday afternoon, not long after Sólstafir played, I wandered by yet another stand that was serving barbecue and spotted guitarist/vocalist Addi Tryggvason and bassist Svabbi Austmann standing nearby wolfing down some wings. I waited politely until they finished and then introduced myself to Tryggvason.  He was very friendly, said nice things about our humble site, and seemed to be having a fuckin’ blast. I did not have my camera that day.

While on the subject of bodily necessities, one corner of the huge lot was devoted to port-a-potties. There were a few times over the 3 days at Edison Lot (Friday through Sunday) when you had to stand in line, but most of the time there was no wait. 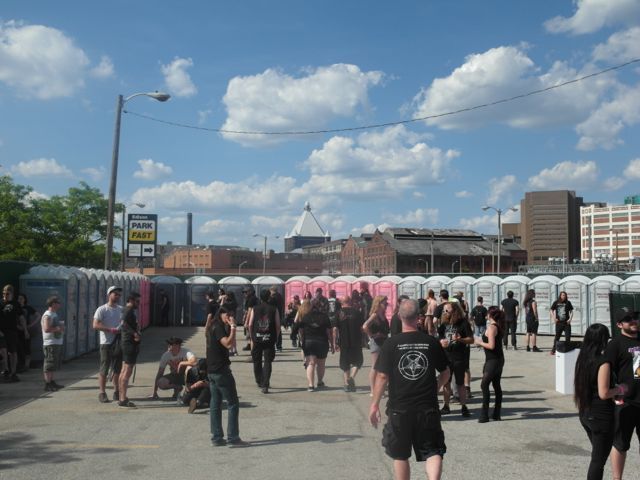 The weather was almost perfect throughout the course of the three days at Edison — very pleasant during the afternoon, and almost cool at night. The skies were blue, with white clouds above, and the only downside to the exposed nature of this space was a risk of sunburn. To deal with the brightness of the afternoons, the organizers had set up dozens of picnic tables under a part of the space beneath the overhead freeway, so people could get out of the sun and take a load off when they needed to. That area was always pretty crowded, but it was still a nice touch. 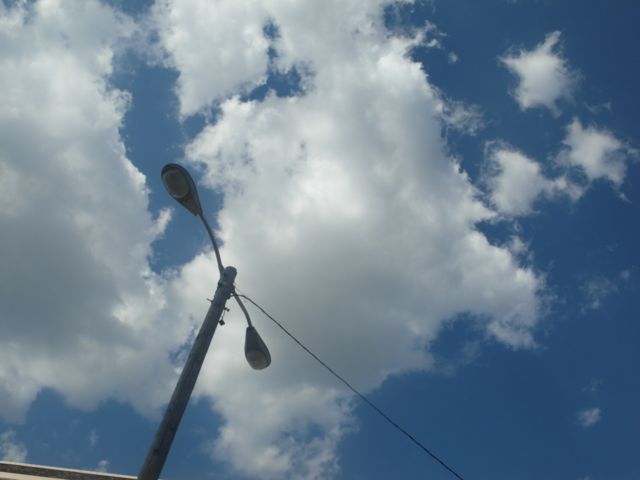 And now to the coolest thing about the shows at Edison Lot: Each day the music started in the early or mid-afternoon and continued until about 11 p.m. — and there were no breaks. As soon as one band would finish playing at Stage A, the next band would be starting at Stage B. And when the bands at Stage B would finish, Stage A was fired up and ready to go. There was barely enough time to walk from one to the other. To get a prime spot, you had to leave before the preceding set was over to get to the opposite stage. 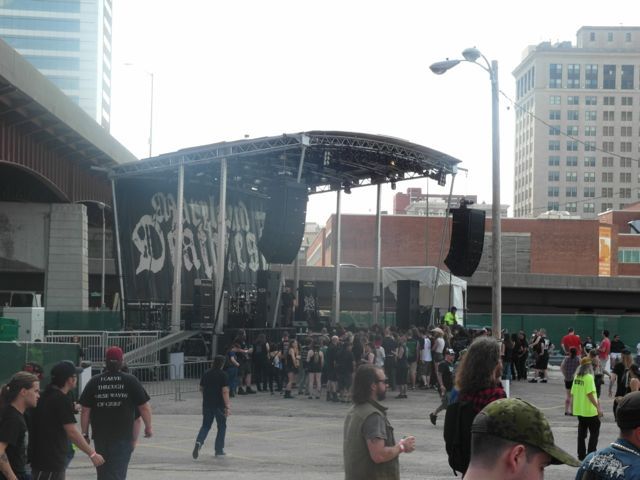 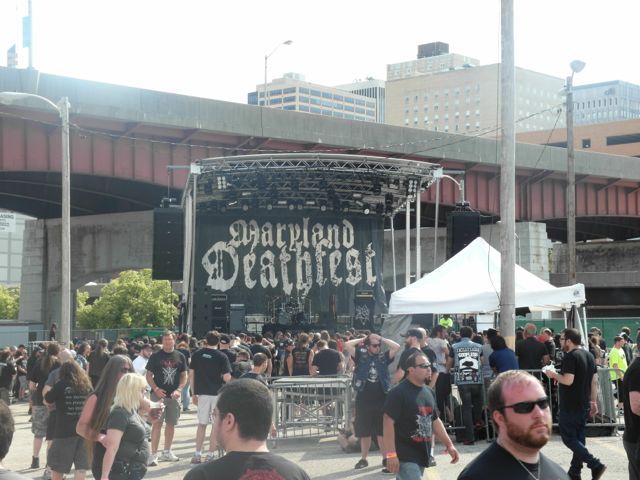 But shit, I am NOT complaining. Being late is like an unwritten law of every metal venue I’ve ever been to. It was astonishing to see every set at Edison Lot starting almost exactly when it was scheduled to begin. You really could plan your day based on who you wanted to see and what venue to be at, and have everything go off exactly as planned.

Of course, the non-stop nature of the music also meant that missing shows was inevitable — even putting to one side the fact that there were times when other bands were playing at other venues. If you needed to pee, get beer or food, check out the merch area, or — most importantly — shoot the shit with old and new friends, you were going to miss something. But that wasn’t a bad thing either, because taking breaks was really the only way to avoid total sensory overload.

And of course, even when you weren’t right in front of a stage, you could still hear the music — no matter where you were. There were times when a band was playing and I was off doing something else because I didn’t think I would be that interested in them, and then I’d start listening to the music and go, “Shit! That actually sounds pretty fuckin’ nice”, and I’d head over to the stage and take it in.

Well, my lull here in the hotel lobby is nearly over, so I’ll save the observations about the other venues until tomorrow. And eventually, I promise I will get to the music itself — including the performance of this band, which may have been the high point of MDF XII for me. 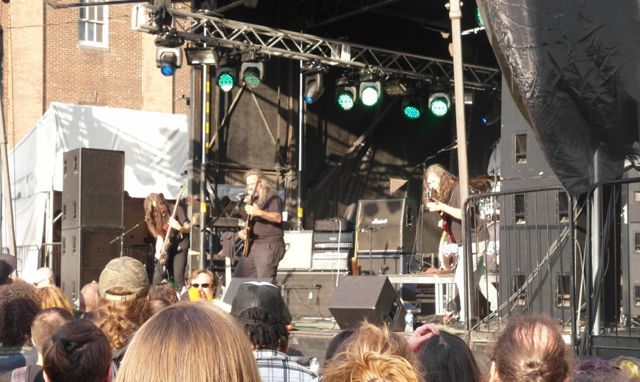