Unfortunately, to some Marty Friedman is just “that guy” who played guitar and contributed to several of Megadeth’s best records, which is absurdly high praise in itself. But often his mind-blowing neoclassical efforts in Cacophony go undermentioned or unknown by modern fans, as does his continually solid solo career — a career that has shifted toward more Japanese releases and Japanese cultural efforts since his relocation there some time ago. The man has an unreal discography behind him, and yet Inferno is not a showcase of solo showboating or an example of resting on past achievements and styles.

Inferno is more than a scorching storm of guitar pyrotechnics or a cliche title. Ultimately, its intensity serves as a reminder that Marty Friedman isn’t done blowing minds yet, and the beautifully emotive feeling in his playing is alive and well here. Some modern updates such as Meshuggah groove influences find their way into a few tracks, but the leads and soloing over the top of those grooves put most all to shame. 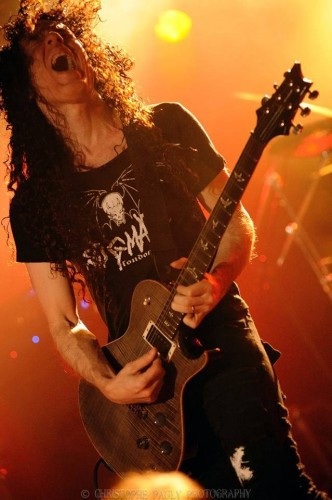 The several songs with vocals inject a hefty dose of differing personalities and flavors to the shred sauce, including poppier rock vocals by Danko Jones on “I Can’t Relax” as well as a second appearance by him alongside Children Of Bodom’s Alexi Laiho on the energetic melodic stomper of “Lycanthrope”. My personal favorite of the songs with vocals has to be “Sociopath”, where the greatest named guitarist and one of the sickest shredders ever, David Davidson, joins forces with Friedman to conjure a perfectly prickly thrash heaven.

Several riffs and sections in Inferno sonically nod to Friedman’s Cacophony past, especially on the title track (and album opener) “Inferno” right off the bat, and the album closes with more flashes to the past on “Inferno (Reprise)”. Yet another reminder of Cacophony appears on “Undertow”, but most significantly so on the grandiose, intricate maze of shadows and light in “Horrors”, the first song co-written by Friedman and Jason Becker since Cacophony. A veritable musical orgy of joy awaits fans of Cacophony is basically the point of all that. If you don’t enjoy Speed Metal Symphony I weep blood for you, 666 drops to be exact.

Marty Friedman allows Inferno, like many of his prior records, considerable space within which experimental ideas flourish. This leads to things such as the extreme saxophone infusion courtesy of Jørgen Munkeby paired with Friedman’s wild shredding on the appropriately titled “Meathook, and the contrasting acoustic-shred nuttiness of “Wicked Panacea” with calming Latin contributions courtesy of Rodrigo y Gabriela.

While Friedman already has created numerous absurdly high-caliber albums, I can confidently say this is right up there with his very best work. Marty Friedman delivers ample evidence on Inferno that he is still hungry and evolving, a trail-blazing guitar icon not content to confine or repeat himself. He has created his heaviest, shreddiest, and most experimental solo record yet. Clearly the man is still on fire — spin the flames of Inferno until headbanging severs your head from your neck.

Inferno is out today in Europe and will be released in the U.S. tomorrow by Prosthetic Records. Order via the link below.