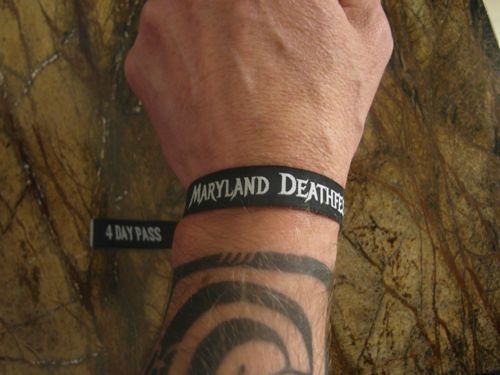 “Having a great time.  Wish you were here.”

As I warned you I might do, I’ve decided to put together a small diary of my excursion to Maryland Deathfest this year. I intended to write something day by day, but somehow the waking hours have flown by, so I’m a few days late. I thought about writing nothing at all because of the possibility that it could be seen as obnoxious, kind of like the first sentence in this post, except with more words. Obviously, that risk hasn’t stopped me.

As I write this, it’s mid-day on Sunday, with one full day of the festival still to come. So far, it has been an incredible experience in every way. The music has been fantastic. The venues have been great. The organization and logistics for an undertaking of this size and complexity have been very impressive. We’ve had beautiful weather, and all the people I’ve met, without exception, have been beautiful, too.

And that last point is really the first one on which I ought to elaborate.

I’ve never been to a metal festival before. I thought I really needed to do my best to see almost every band that I could see while here. I’ve discovered that’s just not possible. You get overwhelmed by sensory overload. You get worn out standing up (and I also had a very sore neck by Day Two). You need breaks for food and drink. And most important, you need time to meet and talk with people, because that has been half the fun of this trip for me.

Many of the people I’ve met I “knew” before MDF, but only through the byways of the interhole. And many more I had not known at all. I want to mention some of these people, though I’m sure I’m going to overlook some because, uh, I’ve been mentally impaired from time to time since I got here.  More than usual.

From the NCS community, I’ve spent time with KevinP, SurgicalBrute, and TRex — and of course, BadWolf has been one of my main wingmen throughout the festival.

From the metal blogosphere, I’ve had great fun hanging out with Richard Street-Jammer from IO; Jack, Mick, and Durf from Brutalitopia; Tom Campagna from Heavy Metal at About.com; and Birgit Haugen from Metal Storm.  I’ve also really enjoyed talking with Kim Kelly, Doug Moore, Mike Fitz, Scab Casserole, other folks from IO introduced by BadWolf, and Lars from NPR.

From elsewhere in the world of metal media, Bob from Relapse, Enrique from Season of Mist, and Nikki from Century Media have really gone out of their way to make me feel welcome, and I finally got to put a face on the name Liz from Earsplit PR.

I’m still a little reticent when it comes to chatting up musicians. Despite my advanced age, I still turn into a fangirl quite easily in the presence of people whose music I love. But I have been forward enough to meet and talk with some band dudes who I thought were really good-hearted, engaging people, including:

Addi Tryggvason from Sólstafir, T-Roy from Sourvein, Pete from Whitehorse, all the dudes from Seattle’s Theories, Doug Moore again (Pyrrhon), and Scoot and STE from Extinction of Mankind (Scoot is also a member of NCS favorite Vallenfyre, and he went out of his way to thank us for the support we’ve given Vallenfyre — I was really blown away by how gracious he was). Getting to shake hands with all members of At the Gates was also a fuckin’ thrill.

One musician I have to single out, both because I’ve encountered him a couple of times since the festival began and because he is remarkably friendly, open, funny, and kind-hearted — and because he has one of the most infectious smiles, which is always on display — is Jacobo Córdova from Mexico’s Zombiefication and Majestic Downfall. His sunny, upbeat disposition sharply contrasts with the obliterating atmospherics of his music, and when I mentioned that he said something that sort of sums up this festival for me: “Metal is love — you can feel it all around you”.

Last but certainly not least, I’ve really been fortunate to be accompanied on this trip by Matty and Eryn from Seattle, who have been a blast to hang out with. One could not ask for two better running buddies. I’m sure this trip would not have been nearly as much fun without them, and my memories of MDF XII will now be forever intertwined with the great memories of them and BadWolf.

I have stories I could tell about all the encounters mentioned above, but I’m going to keep them to myself since these weren’t interviews, just friendly private conversations. But they’re a big part of why this festival has been so damned much fun, and they will also help explain why I missed performances by bands that at least some of you will think I should be shot for missing. More on that in another installment…