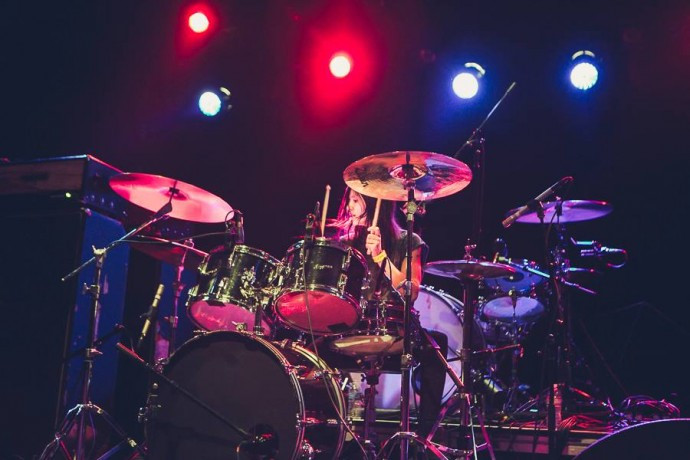 (We welcome the return of guest writer Alain Mower and the fourth in his series of interviews of women in metal. In this edition, he talks with Hozoji Matheson-Margullis, the drummer/vocalist for Seattle’s Helms Alee, whose latest album Sleepwalking Sailors was released earlier this year and whose new split with Young Widows is coming next month.)

This series is dedicated to creating discussion and awareness by expressing the observations, thoughts, and opinions of current prolific metal musicians who, in their spare time, also happen to be women. This is in direct response to the few stragglers in the community who think that there is still a place for misogyny in metal.

If this results in you punching some loud-mouth, drunk sexist at the next show you go to or calling someone out when they question the attendance, attire, or musical capabilities of a woman at a show, then that’s all I could ever ask, and then some. 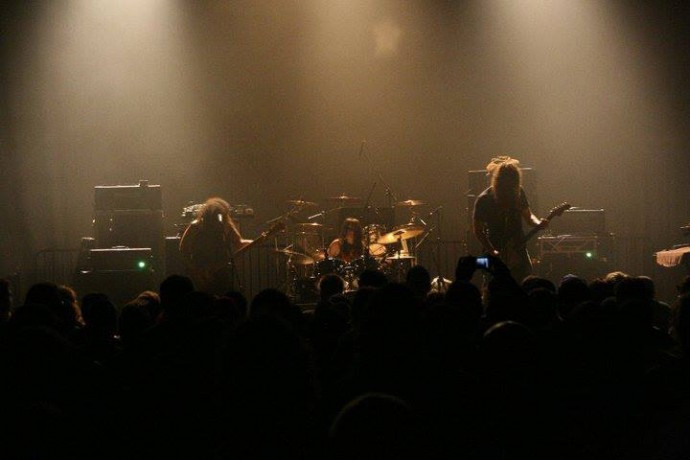 For me it was the weird sounds that first attracted me. Just being a weird kid and finding something that aurally matched what was happening in my brain. Since then I’ve grown to love the community behind the music. And that has made me a lifer!

What inspired/lead you, as a musician, to delve into the relatively small (albeit dedicated) niche market of dark music?

Well I kinda have the same answer for this question as I did for the last question, ha! It’s just the world I am naturally drawn to. 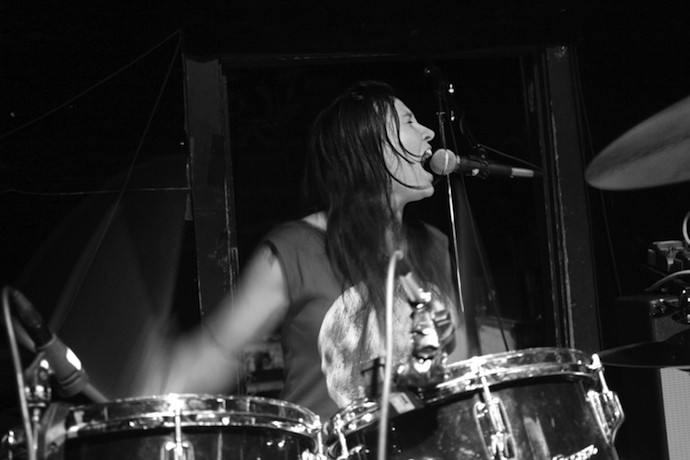 As a female musician in the metal scene, have there been any hurdles that you have had to overcome?

I am lucky in that I grew up in a part of the country where it is less rare to see a woman playing heavy music. So the sexism challenges have been less prominent for me. But I recognize that is not true everywhere and it can be truly challenging for women in the male-dominated heavy music world. The worst I’ve had to deal with is brushing off ignorant comments from a few pea-brained dudes I have encountered at music stores, and at shows, who are not familiar with the concept of sexual equality. There is also the occasional fellow musician who somehow thinks the reason I am, or the band I play in, is getting attention is supplemented by the fact that we are women. That one bums me out the most because it attempts to disregard the years of hard work we have put into learning our instruments and writing our songs. To imply that the reason people like our music is because there are chicks behind the instruments is to imply that we shouldn’t take pride in our accomplishments because they were not earned but given to us.

I personally refuse to believe that metal bands can “get big” not based on musical merits, but because they have women in their group, yet I’ve heard this sentiment expressed by metalheads both in regard to big acts, and underground up-in-comers. What gives?

It’s just completely ignorant. There are tons of bands with women in them that get no attention at all. Really good bands too! And there are tons of bands with zero women in them that get lots of attention. Really bad bands too! I think people who believe that a band can get popular for having a female member are just uninformed and behind the times. 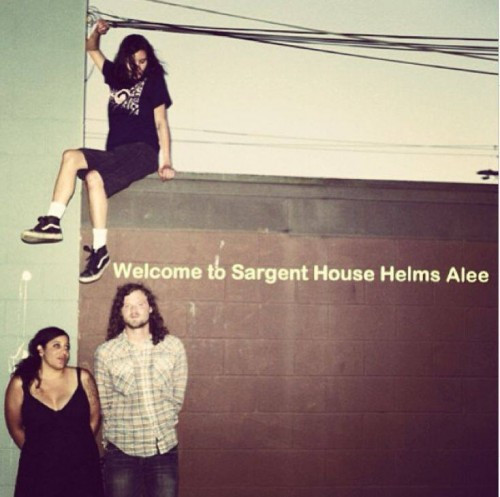 I’m not really sure, I mean, “metal music and culture” is such a broad category. I will just say to any seeking woman that they should not come at anything in life with a segregated attitude about their sex. We are different from men, yes, but that doesn’t mean we are any less competent to enjoy or create good art. And all intelligent people are aware of that. If anyone comes at you with the attitude that you are less capable because you are female just get away from them. There is no sense in wasting your time with those people. The few times I’ve tried to argue with a caveman about this sorta thing has always left me more irritated because my point didn’t get through and now I’ve wasted time that I could’ve spent having a fun or interesting conversation with someone else in the room. Humans need to see change to believe it. So if enough women are in the forefront doing rad shit we won’t have to have this conversation anymore. Lead by example. Work hard at your craft, be honest about who you are, and you will find success in happiness.

It’s just a matter of not inhibiting yourself by coming at it with the attitude of “I’m a female musician trying to break into the industry”. Drop all of the mental walls you might put up by believing there is some fundamental weakness you carry with the weight of your tits, whether that is a weakness you perceive yourself to have as a woman, or you believe others might perceive you to have as a woman. That shit ain’t real! You are an artist putting your art out for the world to see. Some people will love it. Some people will hate it. That’s the way it is for all artists who choose to put their art on public display. If you are making art that is honest then you can feel good about it even when it seems like nobody in the world gets it. 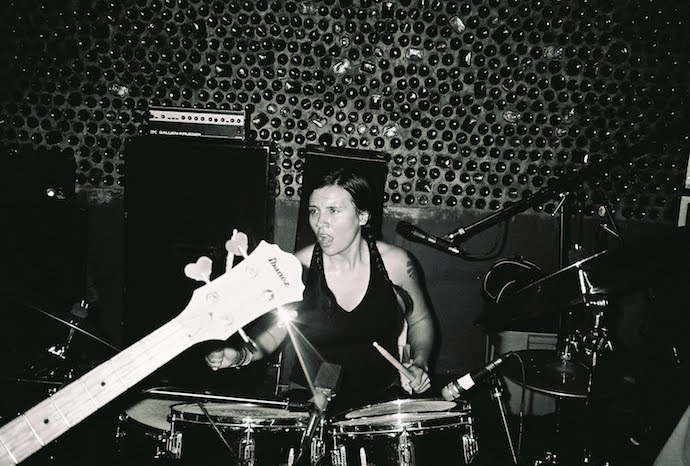 Many have expressed, in my opinion, a fair argument that metalheads are often close-minded in their reluctance to embrace change. Is it fair to say that this applies to the views of metalheads toward women in the metal community on some level? If so, what do you think the community as a whole can do to continue to progress toward that all-accepting culture that we idealistically and foundationally wish to be?

I think this is a true reality in many communities including, but not limited to, the metal community. We are still, as a species, working toward the stage in our mental evolution in which we do not need to compartmentalize and categorize everyone and everything in order to feel in control. And it has been true throughout history that when the accepted mold starts to crack, people get uncomfortable and act ignorantly. So yeah, on some levels the metal community is struggling to accept that chicks with tits and shit could actually contribute good art to their scene.

It seems so laughably archaic to me that I often forget it’s still a real issue. And then I meet some lovely girl at a show who tells me she’s always wanted to play but was told by some jackass somewhere down the line that it isn’t ok for girls to play drums or whatever. And I’m reminded how lucky I am to have grown up in a town where I felt encouraged to join the scene. No one ever once mentioned my sex as an issue when I was a teenage girl learning to play drums. So I think the best thing we can do to spread that feeling of encouragement to the larger metal community is to give propers to the female musicians who are out there doing it for real WITHOUT focusing on or emphasizing their sex. Just acknowledge them as an artist and stop asking them what it’s like to do all that stuff whilst still having a vagina.

Seattle based Helms Alee released their third and most recent album, Sleepwalking Sailors, through Sargent House Records at the beginning of this year. It’s available here:

Long awaited, Sleepwalking Sailors comes across as the meeting of Helm Alee’s previous releases into a more directed sound. The trio’s ‘roller-coaster’ tendencies to write constantly evolving songs that are difficult to categorize under even two or three sub-genres in spite of their streamlined song lengths still remains intact, and the transitions feel organic and flawless on Sleepwalking Sailors.

Whether Stoner Rock, Post-Rock, Sludge, Noise Rock, or Post-Hardcore comes to mind, the elevated vocal diversity of three distinct singers – an admitted bias that I have wholeheartedly embraced – keeps the album fresh and original from start to finish.

The production of the album, handled by ex-These Arms Are Snakes drummer Chris Common is nothing short of masterful, and is a necessary asset to the stylistic diversity that Helms Alee brings on the record.

Here also is a stream of the forthcoming split by Helms Alee with Young Widow, which includes three new Helms Alee songs:

Other Interviews In This Series:

2 Responses to “WOMANOWAR: THE ARGUMENT FOR BALANCE & EQUALITY — AN INTERVIEW WITH HELMS ALEE DRUMMER AND VOCALIST HOZOJI MATHESON-MARGULLIS”