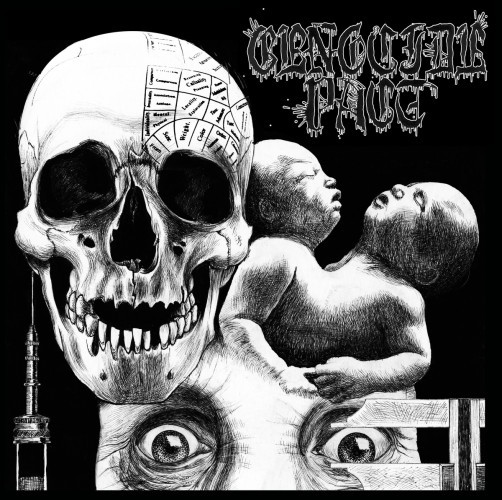 I was in a death metal mood this morning and spent some time exploring music from death metal bands I hadn’t heard before. From that foray, I surfaced with two offerings that I’d like to recommend.

Genocide Pact are from Washington, DC. Two of their members (Tim and Nolan) also play in a grind core band named Disciples of Christ, and the third (the drummer, Connor) is a member of other bands as well. To date, Genocide Pact have recorded a demo that was released in 2013 by Malokul, which I discovered because A389 Recordings is distributing it on 7″ vinyl with cover art by Joshy of DC’s Ilsa.

The four songs on the demo are stripped-down and devoid of frills or fads. They lumber and crunch like a phalanx of huge earth-moving machines that haven’t had a tune-up in decades, belching the smoke of distortion and periodically squealing with feedback as the gears come close to locking up. The rhythms alternately bolt forward in a d-beat-driven rush, chug like a hellish locomotive, and stagger like a dying giant, with the crash of cymbals and the vocalist’s hoarse growls cutting through the cacophony of this brute-force demolition project.

There are plenty of tasty, bone-crushing riffs in this demo, and I really enjoyed the drum work as well. Fans of Bolt Thrower and early Sepultura should find a lot to like in this band’s first outing — and thankfully, it won’t be their last. Genocide Pact have another 7″ on the way via Bad Teeth Recordings and are also working on a debut full-length as well, which rumor has it will be released by A389.

The 2013 demo can be ordered from A389 via this link, and it’s a free download on Bandcamp too. Listen below.

Two songs emerged from the project this week. One of them, “Savage Land”, is streaming exclusively at Decibel (which is how I found out about Gruesome) and the other, “Closed Casket”, is now up on Bandcamp as a “name your price” download. Both songs are absolutely kick-ass in their own right, but they are also authentic forms of homage to Death — and they drew this endorsement from Death’s former manager Eric Greif on the official Death FB page:

“A full-hearted, meaty endorsement by me for GRUESOME, our friends Gus Rios & Matt Harvey’s new DEATH-inspired project. Go sick & revel in the glory of the old school death metal we love & worship.”

Listen to “Closed Casket” below and use the Decibel link to check out the other one:

4 Responses to “GENOCIDE PACT AND GRUESOME”