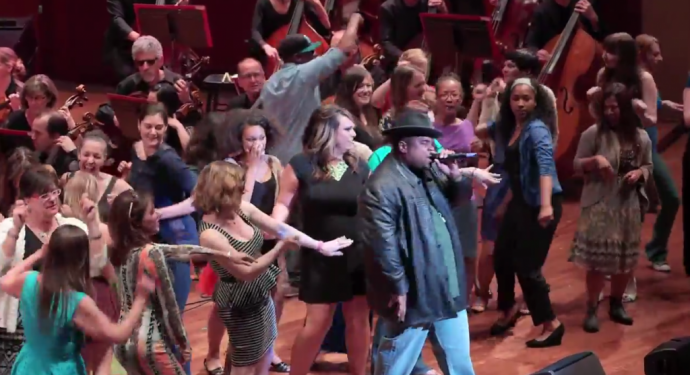 This is off-topic. No metal here. I’m just killing time until I can come up with something else to post today, if my fuckin’ day job will leave me alone long enough to do that. In the meantime, here’s something that happened in my home town of Seattle last Friday, June 7:

Seattle’s own Sir Mix-A-Lot performed “Baby Got Back” with the Seattle Symphony Orchestra and about two-dozen butts (attached to about two dozen ladies from the audience).

This was done as part of the symphony’s “Sonic Evolution” project, in which composers are commissioned to write orchestral world premieres inspired by bands and other artists from (or in some way related to) Seattle. In this instance, composer Gabriel Prokofiev wrote and conducted an original piece inspired by Sir Mix-A-Lot. Did not see that coming.

Also, as you’re about to witness, he also arranged an orchestral accompaniment to “Baby Got Back”, the second best-selling song in the U.S. in 1992 and controversial enough to be banned from MTV back then (briefly). I guess you could say times have changed.

This is a strange thing to see, basically one long “what the fuck?” moment, and ripe fodder for social commentary. But I must admit I got some smiles out of it.

4 Responses to “ORCHESTRAL MOVEMENTS IN THE ‘HOOD”