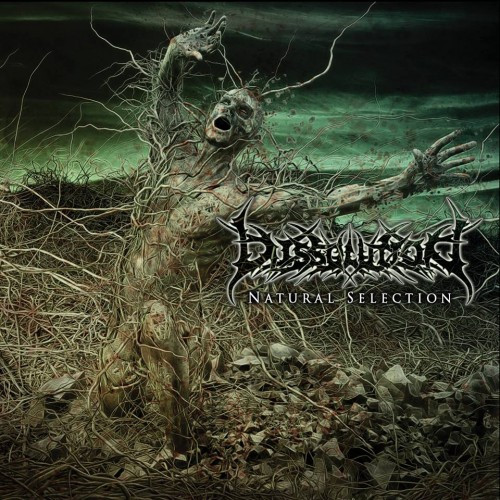 There probably isn’t a single thing that ignites the self-righteous music fan’s fury more than the “for fans of” sticker that will often grace the front of their favorite underground bands’ CD releases. Rarely, we proclaim, is such a thing ever right — those other bands have never even gotten close to my favorite band’s genre, or their sound. It pigeonholes them! And why in god’s name do all of the stickers say, “For fans of The Black Dahlia Murder?!”.

We then usually shake our fists at the sky and go outside and download the thing from Itunes anyway.

However, and I preface this with some hesitation since I have been known to rage on the “for fans of” sticker myself, they do occasionally get it right and nail a band right in the wheelhouse of their sound. It’s a bit too reductive of a practice, but considering that the labels have a split-second to capture someone’s attention in a record store, I can see why it is done.

I open this review of Canada-based death metal band Dissolution’s newest album Natural Selection with such a musing, because this is a disc that I can easily recommend to people via the “for fans of” sticker method. Do you enjoy Carcass? Have you missed The Absence during their seemingly endless break? Because if so, then do I have the album for you.

Natural Selection is the work of a band who seemingly grew up at the altar of Carcass and also genuflected to the modernized North American take on melodic death metal that The Absence have spread out across their discography — all with songs reaching well into the four- and five-minute mark, making this Natural Selection a journey in its own right.

Dissolution hail from Winnipeg near the longitudinal center of North America and they’ve been around for a little while now, with Natural Selection marking their third full length after their debut of Dying. Dead. Undead. and Dirt Skies. The band landed on my radar at the point in between Dirt Skies and Natural Selection as part of a combination of recommendations on Last.fm and Metal-Archives random-band button-hitting, so when Natural Selection hit I figured it would be a good opportunity to check out a new group and also share some new music.

However, the disc proved exceedingly hard to find at first. I still can’t seem to locate a Bandcamp stream for it and the album was released way earlier this year — so this review has taken some time to complete. But also, on top of that, Natural Selection is a dense album choc-a-bloc full of music packed into eight tracks. If the band had found any way to jam any more music into the songs on this album then it probably would have collapsed into a neutron star and fallen through the earth.

Surprisingly, Natural Selection takes a lot of cues from the melo-death spectrum as well. It’s so full of red meat for fans of that genre of music that it laughs at the concept of a 72-oz. steak. And honestly, this is part of what makes the album feel like a journey. You really have to be prepared for it, and really want the specific combo of artists mentioned earlier that rise up in the sound of Dissolution, because good god, are you going to get a lot of it by the time Natural Selection wraps up.

Natural Selection is built upon mountains and mountains of rhythm guitar riffs, with each song stretching them to their breaking point. Dissolution’s style isn’t one that lends itself to an insane number of showy guitar leads or solo work — though some really good ones are sprinkled throughout the album — so a heavy emphasis is placed on just how much they can get out of each gallop, thrash, riff, and everything in between that can lend itself to a good guitar section.

This is the root of a nagging issue with Natural Selection: There are so many guitar parts that are rhythmically based, with little else going over the top of them, that you really have to work to discern where you are in the disc. Each song moves at about the same tempo, some slightly faster than others, but most of the album tends to be a mid-tempo gallop, with the occasional super-quick death metal section. This has the effect of making the album seem longer than it actually is — because Dissolution hail from the early Metallica school of “No guitar part left behind!”.

While creating a dense slab of material is an awesome feat to pull off, it becomes difficult to distinguish where you are by about the middle of track five (out of eight) if you aren’t fully locked in to each and every movement on the album. It’s odd, because if you separate the songs from each other, not one is inherently bad; they’re all really good demonstrations of death metal from the Carcass school of beefy, heavy guitar movements that inch forward with thudding precision. But as they run together, you may lose your way before fishing out your mp3 player to locate your place within the album’s flow.

That said, there are some goddamned great songs on Natural Selection, and they’ve been strong enough to keep me coming back pretty consistently. Each track does tend to stand strong on its own, and when you whittle away the big block of marble that is Natural Selection into a fine sculpture of five or six songs that you really enjoy, you find a band who are firing on all cylinders.

Many of the guitar riffs — especially the opening Gothenburg-esque one-two that makes up the song “Abnormal Appetite”, for instance — could go right in the melo-death hall of fame, and that song is amplified by a death-and-roll midsection as well. Vocalist and guitarist Dennis Mott has a shriek built for this style of music and he’s always in the mid-high to high range with a full acidic growl. It comes out really strong during “Abnormal Appetite”, though he also really stretches his lungs out during the galloping opener of the album, “Ride To Devastation”. Given the music’s style, that could possibly be one of the most on-the-nose song titles of all time.

“A Raven’s Stare” is another really good, ripping five minutes of furnace-hot metal that also sees some really heavy blast work — courtesy of one Scott Patterson. It’s also probably the one song that really made me lean heavy on the Carcass comparisons, especially with its opening section.

The titular song “Natural Selection” is another one that, alongside “Abnormal Appetite”, is built for instant headbanging, although that opening shriek and blast section that has Dissolution sounding like fire raining from the sky is so fucking good that it has become one of my highlights. The band did a smart thing camping this track at the end of the disc because it sends it out on a real strong note.

I’d be remiss if I didn’t pay some lip-service to “Falling In Shreds” as well. It’s another highlight in a strong batch of opening tracks. It’s also one of the real mid-tempo grinders that accelerates really quick as well — a move Dissolution make again and again on other songs such as “The Pact” and “Years Of Redemption”. It also includes a very good guitar melody that helps it stand out amidst the buffet of blasts and guitar work that they serve up across the album.

Despite becoming something of a battle to get through, Natural Selection feels like an album built for people who’ve been starved for this specific style of music, written by students who’ve studied this genre for a super-long time. They know what you want and they serve it up in bulk, like a warehouse store membership gone mad, filled to the brim with blasts and grinding guitar work. Every song on this album can almost unnaturally cause you to want to headbang at one point or another.

The design of every song has clearly been laid out and rigorously defined. So many of them have an amazing opening part before dropping right into rapidly picked, buzzing guitar and blast beats that when you do this album front to back, you lose track of which openings you’ve heard and which you haven’t, yet the songs work so goddamned well on their own (this disc is so shuffle-friendly it isn’t even funny, something Amon Amarth have a similar issue with). Even so, there are still a really good number of tunes that make Natural Selection worth going to, and it shows that Dissolution are super-strong at their style of music.

Hopefully in the future, if the band get the chance to go in for a fourth disc, they will succeed in differentiating their songs a little better, to relieve the fatigue that Natural Selection can produce, because this is a sound that has potential and Dissolution are really, really good at it. Judging by what they’ve demonstrated here, they deserve another shot to really knock it out of the park.

Natural Selection is out now and available at Amazon mp3 and iTunes. Listen to the music below.