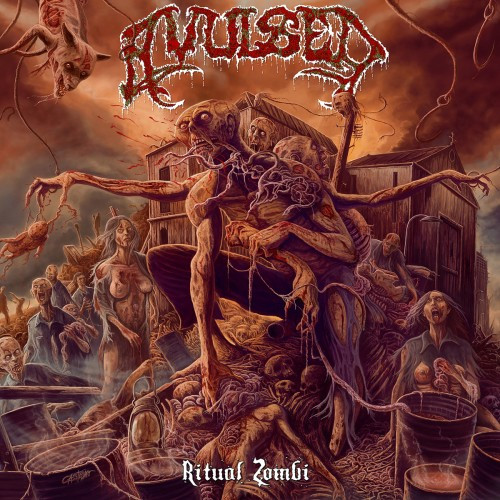 The Spanish death metal band Avulsed have been slaughtering souls and raping ears for more than two decades, and the passage of time seems to have had no effect on the strength and immediacy of their powers — their latest album, 2013’s Ritual Zombi, is a classic undead crusher (and as you can see, it’s adorned by deliciously grotesque artwork).

Part of what makes Ritual Zombi such a potent album is the sound of Dave Rotten’s voice. To steal the words from one appreciative review, “his decrepit, rumbling, nihilistic growls remain an immense feature here…. [He] gurgles like a human sewer spewing forth flesh-eating plasma”. But although his vocal presence strides the album’s landscape like a titanic golem, the record is also loaded with grisly riffs and suppurating guitar leads that have a way of getting stuck in your head.

Speaking of grisly old-school riffs and morbid melodies, we’re pleased to bring you the premiere of Avulsed’s lyric video for “Horrified By Repulsion” from Ritual Zombi.

The animation in the video was created by Grind Brothers Art, and it’s an entirely suitable visual companion for the music. Plus, you will learn the best defense to being consumed when the zombie apocalypse comes.

Enjoy the sights and sounds below…

One Response to “AN NCS VIDEO PREMIERE: AVULSED — “HORRIFIED BY REPULSION””