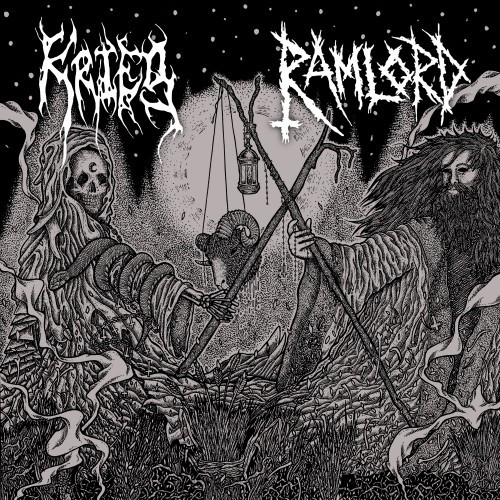 If you google the phrase “black punk” you’ll discover a music genre known as Afro-punk, as well as a band named Death — not Chuck Schuldiner’s ground-breaking group, but a “proto-punk” band from Detroit formed in the early 70’s by three brothers, who happen to be the subject of a recent critically acclaimed movie. What you won’t find is any reference to the forthcoming split release by Krieg and Ramlord — at least not yet.

I’ve been listening to this four-song split once a day for the past week (while gazing fondly at its killer cover art), and my first impressions haven’t changed: At its core, this a fusion of black metal and punk. It would be tempting to file it away under the heading of “blackened crust” along with bands such as Young and In the Way and Martyrdöd, but to these ears the music on this split is an even more primal union of black metal and punk, and its primal appeal is strong.

Krieg has been kicking out releases since the mid-90s, with a steady flow of splits and EP’s to go along with six albums. This split with Ramlord is one of two scheduled for release this summer, the other being a split with Wolvhammer that I’ll also be reviewing very soon. For this release Krieg contributes one original song and a cover.

The cover is a song called “Worthless Nothing” from the 1993 LP The Greatest Invention by the seminal UK crust band Doom. It drives hard and fast, propelled by a combination of virally infectious jumping riffs and doused in acid by one of the best voices in US black metal.

The original song is “Mocking Dead Empires”. It’s a natural pairing with “Worthless Nothing”, fueled by another blood-pumping punk riff, but one that this time alternates with bouts of blast-beat drumming and storming tremolo guitar. The song is capped by another voracious vocal performance by Imperial, who mixes in some hollow roars with his caustic howls.

Ramlord are a New Hampshire collective with two albums under their belts and a quartet of previous splits, including one other (with Nuclear Devastation) released earlier this year.

Their first song on the split , “Grey Sky Prison”, never stays in one place for long. It jumps back and forth between stripped-down, head-bobbing punk, crawling Sabbathian doom (enhanced by the band’s fat guitar tone), and d-beat crust. The rhythms change rapidly, with the themes being reprised as the song proceeds, while the vocalist shrieks, bellows, and sneers in a convincing display of fury.

The second Ramlord track, “From Absolution To Eradication”, bolts from the gate like the eruption of an alcohol-fueled brawl, and it’s over before you know it, barely breaking the one-minute mark. Short, but sweet.

The split will be released on 7″ vinyl by Unholy Anarchy Records on July 15. The total pressing will be limited to 500 copies, with 200 on white and 300 on black. Pre-orders should be available soon. I assume music will eventually begin streaming somewhere, and I’ll update this post to include it when that happens.

2 Responses to “BLACK PUNK: A SPLIT BY KRIEG AND RAMLORD”