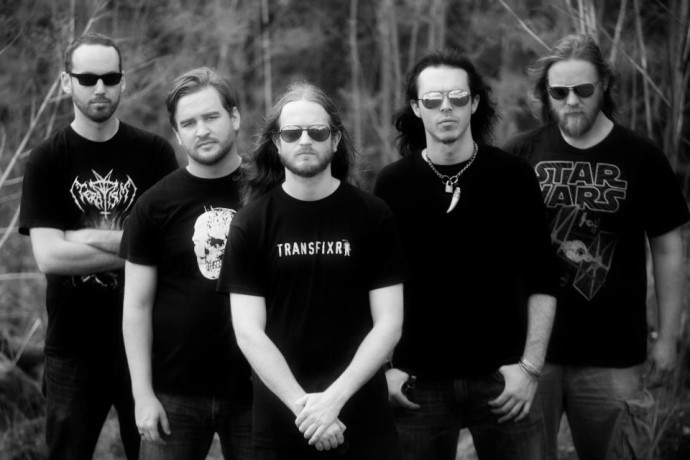 If you’ve been lucky enough to catch the Southeastern leg of Agalloch’s current tour, then you’ve already had the chance to witness the live performance of Vex from Austin, Texas, who’ve been along with Agalloch for that ride. For those who haven’t had that chance, we’ve got the next best thing — a premiere of a new Vex song that’s destined to appear on the band’s third album, Sky Exile.

This really well-written, mainly mid-paced song employs the kind of heavy, hammering riffs and flesh-raking vocals that will be familiar to fans of classic Scandinavian melodic death metal, but as the song unfolds it moves in increasingly interesting and unexpected directions, becoming a sophisticated, multi-textured work with the power to draw you back again and again.

It includes a variety of beautiful lead guitar excursions, including a prog-minded dual-guitar instrumental section that creates an effective contrast with what comes before and after. And what comes after includes a memorable finish, in which the music catches fire in a blaze — while the vocals transform into something quite different.

I wrote earlier that the song has the power to draw you back to it repeatedly, and one reason is that all of the instrumental performances are so good that it pays to devote special attention to each of them on subsequent listens.

Guitarist Ciaran McCloskey explained the concept behind the music in this way:

“It’s a lyrical consideration of the relationship between the grand age of the Dionysians and our own curious age of contemporary art and catharsis. The dialogue in this song will introduce a central narrative set somewhere in West Texas during the torturous drought-plagued summer of 2011. This story will be a focal point of the album as a whole. We are hoping it finished by the end of the year.”

I hope so, too. In the nearer term, there are a few dates left on Vex’s Southeastern sojourn with Agalloch; so if you’re within striking distance of these cities, check ’em out:

You can also find Vex on Facebook via this link. Now, here’s “To Anacreon (Strangling the Muse)”:

13 Responses to “AN NCS PREMIERE: VEX — “TO ANACREON (STRANGLING THE MUSE)””