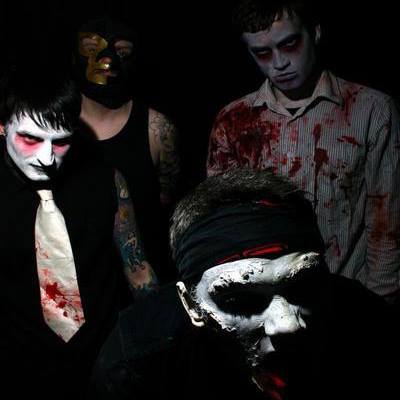 (In this 49th edition of THE SYNN REPORT, Andy Synn reviews the discography of Send More Paramedics.)

The early part of this new century wasn’t exactly my favourite period when it came to the underground metal scene here in the UK. Not that there weren’t some great, hard-working bands out there doing their own thing (and doing it well!), but it seemed like every other band I encountered was desperately trying to be a sub-standard version of either As I Lay Dying, or Converge, but without an ounce of originality or integrity (while also essentially trying to be as dumb and needlessly confrontational as possible).

Now, that’s not the whole scene by a wide margin, but most of what was out there just wasn’t really clicking with me. However, there were definitely a few exceptions, and one of those was the sheer bloody-minded, self-declared “Zombiecore” madness of Send More Paramedics.

Part thrash, part punk, all crazy… Send More Paramedics rose from the grave in 2001, and were sent back into their deathless slumber in 2007, leaving behind a strange legacy of blood, brains, and bile… set to a soundtrack of rabid thrash riffs and punked-up aggression. The band actually reformed for a few reunion shows earlier this year, but unfortunately I couldn’t make any of them. So, instead, here is my tribute to the heathen masters of undead disaster. 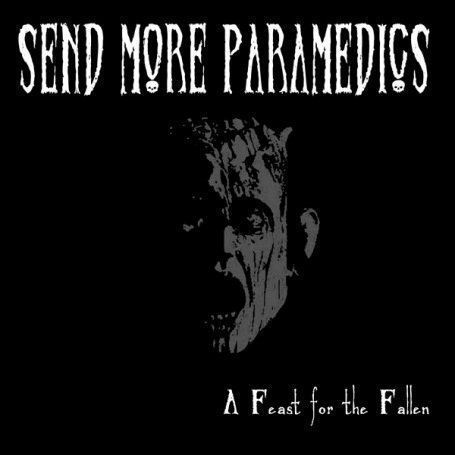 The primitive thrash-metal brutality of “The Hordes” is your first introduction to the Send More Paramedics sound, Medico’s big choppy riffs and El Diablo’s snappy, punkish drum beats conjuring some welcome chaos behind B’Hellmouth’s unhinged yells and howls. “The Pain of Being Dead” is 1:20 of Sick of It All-style spite and sputum, while “Cannibal” is a rabidly aggressive blast of whiplash-inducing riffage and vicious hooks, leading to a riotous finale of belligerent gang vocals.

“Resurrection Cemetary” is characterised by some chunkier, slower riffing, whose B-movie darkness is accented by a feverish, squalling solo section, leading into the twisted, unpredictable madness of “Kingdom of the Undead”, which conceals some unexpectedly horrifying melody in its second half.

“Necromancer” has some truly tight, razor-wire riffage going on, as well as some nasty, pounding rhythm parts (perfectly enhanced by XundeadX’s fleet-fingered bass work), while B’Hellmouth is at his most venomous and scarified throughout. “The Night Has A Thousand Eyes” leads smoothly into the uber-aggressive “Zombie Sweetheart”, which stands out not just for its sheer intensity, but also for some impressively weird lead guitar moments. 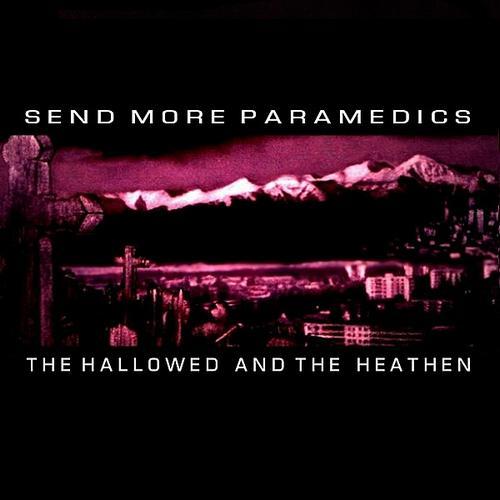 After the haunting keyboard theatrics of “The Hallowed”, things really kick into high gear with “Bokor”, immediately demonstrating the improvements made to the band’s production and overall sound. Everything’s just thicker and nastier and heavier, from the bone-rattling drums to the stabbing riffs, to the ugly groove that crowns the song’s second half.

Ooh… that bass-line that begins “Driven To Destruction” is music to my ears, and should be to yours, too. The rest of the song is just as killer, a frenzy of raging thrash riffs and adrenalized solo work, topped off with a maddeningly infectious series of vile vocal hooks. “Desert of Skulls” similarly gives the bass time to shine, its eerie intro building the suspense before the band go full-Slayer on us, exhuming the cast-off remains of their ancestors and fucking the corpses with sick, lascivious pleasure.

“Zombie Crew” is one of the band’s most famous tunes, a mixing of Misfits-style swagger and Exodus-style savagery, with its tongue firmly planted in someone else’s cheek. Catchy as fuck, too. Highly infectious. You’ve been warned.

By contrast “No Fucking Joke” is… as the title might suggest… much more unpleasant and much more serious, with a penultimate breakdown of sledgehammer death-thrash riffage that absolutely pulverises. “Half Life” is another absolute crusher as well, heavy, brooding and ravenous from start to finish.

“I Can Feel Myself Rotting” is a death-spasm of rapid-fire riffs and slimy bass-lines, followed swiftly by the Obituary-meets-Minor Threat grind and groove of “Burning The Body”, packed to bursting point with rusty thrash hooks and angular death metal aggression.

“A Necklace Made of Teeth” is a surprisingly melodic, impressively focussed speed-metal instrumental, which lulls you into a false sense of security, allowing the ominous introduction of “The Time Before I Turn” to catch you completely by surprise, before the song morphs into a full-on tribute to Beneath The Remains-era Sepultura. Only with more flying body parts.

The screeching antagonism of “Cranial Blowout” takes the band right back to their punk/hardcore roots, before the album concludes (discounting ambient outro “The Heathen”) with the crossover thrash-down of “Easy Meat” – a prime cut of bloody riffage and bone-snapping percussion that rends and gnaws with single-minded savagery. 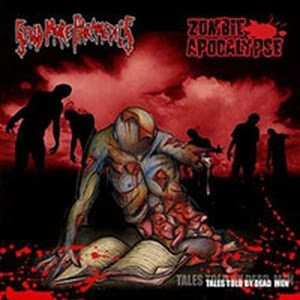 Tales Told By Dead Men was actually a split with fellow deadheads Zombie Apocalypse, but we’re focussing purely on Send More Paramedics here, who provided five gruesomely infectious tracks of punk-fuelled thrash metal mayhem for their side of the record.

“From The Void” again immediately demonstrates the tighter production and heavier sound of the band, refining their undead musical murder to even higher levels of lethality. The moody opening solo soon gives way to a series of frenzied thrash riffs and scattergun drums, all delivered like a viral vector straight to the centre of your brain. The whole band sound even more aggressive, even more rabid, than before. Killer stuff.

“Zombie vs Shark” (and if you know where that title’s from, have a prize!) brings some grim groove to the proceedings, as well as some razor-sharp knife-fight riffage and flesh-rending hooks. And who can argue with a song called “Zombie vs Shark” anyway?

“Funeral” is 1:50 of primal, punky hostility and thrash metal fury, followed by the darkly malevolent mix of malice and melody that is “Nothing Tastes Like This”. The whole thing concludes with the gut-wrenching intensity of “This is the Place of Wailing and the Gnashing of Teeth”, which showcases the entire band at their rotten best. From the insidious bass-lines to the brutally efficient riffs, from the neck-snapping drum work to the throat-rending vocals, everything is perfectly placed and poisonous.

Sample song: From The Void 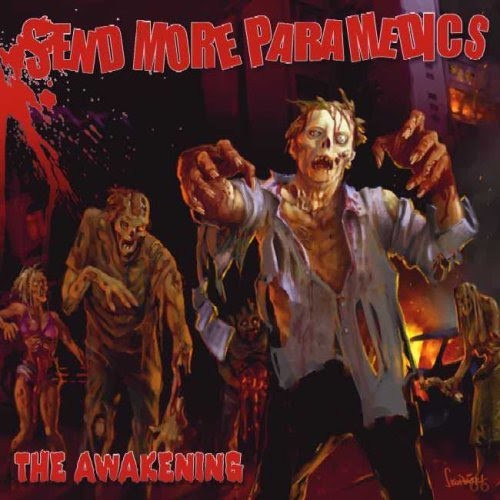 The band’s final full-length saw them at their heaviest and most creative. In fact, the second disc of The Awakening was actually a synth-based orchestral film soundtrack designed to complement the story of the album. It’s an interesting experiment, and one well worth trying out, but I’m going to focus on the metal side of things here, for understandable reasons.

Pure, focussed brutality, the crunching riffage of “Everything Is Not Under Control”, coupled with B’Hellmouth’s trademark lunacy, make for a fantastic opener, bristling with rotten hooks and a surprising undercurrent of diseased melody. It’s followed by the short sharp shock of “Follow Your Programming” and the desperate, thrash-fuelled horror of “Sever”, mixing high-octane riffs with a truly impressive knack for understated melody (and some nicely impressive, up-front bass work to boot).

“Blood Fever” kicks inordinate amounts of ass, hammering home killer riff after killer riff, and a lethally effective chorus refrain, aided and abetted by a touch of truly crushing death metal heaviness at the end of the song.

“Twilight of the Flies” and “Disaster Song” make for a devastating one-two punch of punky power and raw, blood-spattered metallic heaviness, followed by the heaving thrash attack of “This Crowd Is Crushing Me”, and the unforgettable mix of scything thrash riffs and dark melody that is “Flail of God” — one of the band’s absolute best, landing somewhere between Slayer and Carcass, but somehow still entirely unique.

The suicidal frenzy of “Virulence” is followed by the flesh-creeping crawl of “Scapegoat”. which errs significantly more towards the Death Metal end of the spectrum, its iron-clad chords matched to some truly vomit-inducing vocals, after which both “The Unclean” and “Anthropophagi” see the band switch back into high-speed thrash metal mode – the latter in particular benefitting from some ultra-precise bass work and a backdrop of eerie, disturbing melody.

Both “Vital Signs” and “I Am Every Dead Thing” continue to give the bass-work of XundeadX space to shine, leading the way at times, melding back into the shadows at others, gifting each track a rumbling undercurrent of low-end heaviness as well as a splattering of slithering melody.

The album concludes with the hypnotic lead refrains and ringing, apocalyptic riffs of “Transmission”, whose mix of ravenous aggression and haunting evil serves as a fitting send-off for this band of undead misfits and monsters.