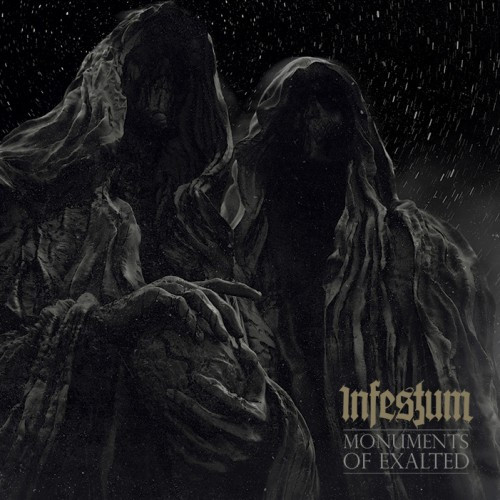 Lacerated Enemy Records has described the music of Infestum from Belarus by referring to the sounds of Behemoth, Emperor, and Aborym, and when you hear the Infestum song we’re premiering today from their new album you’ll understand why.

“Ordo Infestum” begins with a deep thrumming sound that resembles the notes of a bass violin, and then the song explodes in a fury of deep, doom-cloaked riffs, gut-rumbling percussion, and venomous serrated vocals. The sound is massively skull-flattening, and the music’s atmosphere is bleak, occult, and threatening.

Yet the music is not all one thing. In the course of this warlike assault you will hear a piano melody and otherworldly keyboard ambience drifting eerily through the avalanche of riffs, along with the voices of a choir, aching clean vocals, and even an industrial-tinged beat near the song’s finish. 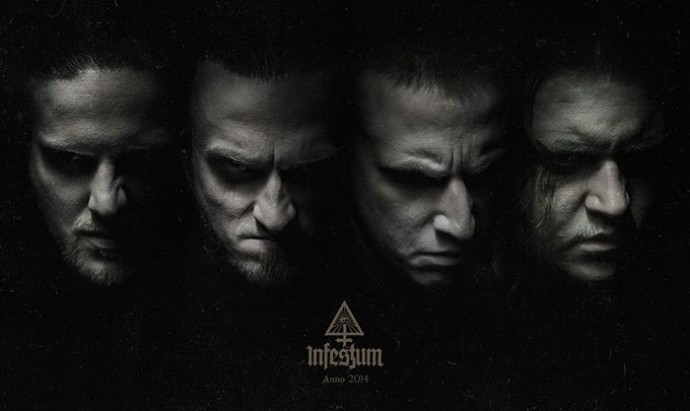 The piano track in the song was created by Mono San, and the lyrics include excerpts from the book Liber Novus (“The Incantations” chapter), also known as “The Red Book”, by Carl Gustav Jung.

The song is as interesting as it is powerful, and a very tempting introduction to the band’s new album, Monuments of Exalted. Here’s the album’s track list:

Monuments of Exalted will be released by Lacerated Enemy Records on August 18, 2014. It’s now available for pre-order either digitally at the Bandcamp link below or on CD at this location (CDs can also be ordered via the Bandcamp page). The extremely cool cover art (as well as band photo sessions) were done by Gerda Ditrih.

Now, check out “Ordo Infestum” below (both YouTube and Bandcamp streams are provided).