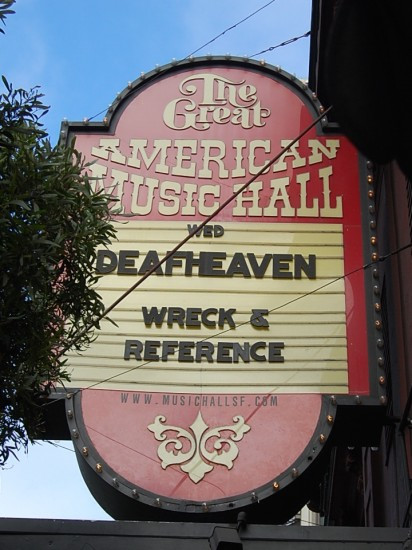 (Guest writer Ben Manzella wrote the following review of the July 2 performances by Deafheaven and Wreck and Reference in San Francisco on July 2, 2014, and took the accompanying photos as well.)

A summer night in San Francisco typically means you can wear a jacket. As someone who grew up in the sunnier part of California (the Los Angeles/San Pedro area), I enjoy this fact. As the line began to form outside The Great American Music Hall, I started to assess the crowd from my point of view. It’s always interesting to see what kind of crowd is attracted to any show, but what do you get when the show consists of a pairing of noise/metal/experimental music (Wreck and Reference) and what is often described as the hipster darling of Black Metal (Deafheaven)?

Now before I go any further, don’t misunderstand me; I’ve been a fan of Deafheaven since their album Roads to Judah was released and I’m thrilled they’ve found a rare amount of success, especially in the times we live in. I won’t deny, though, that it’s not exactly your typical “uber-kvltist” that you’ll see at a Deafheaven show. But I digress — I have nothing but respect for the guys in both bands.

It was my first time seeing both groups, so it wasn’t hard to be excited. As I began to imply, the crowd was diverse and the show also had the air of a celebration, since with it was the final show of the tour as well as Deafheaven’s “homecoming”, more or less. Enough chatter, on to the show. 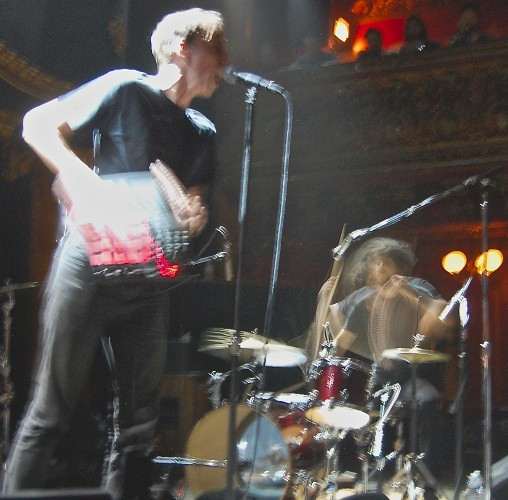 As I was discussing with another photographer at the show, Wreck & Reference could just as easily be on a bill with electronic artist Squarepusher as they could be with Sunn O))) or even Neurosis. It’s no secret that their music is cathartic, and I don’t think they care for it to be a secret. 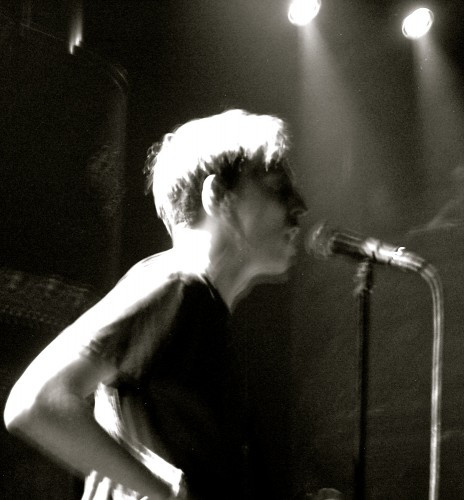 Wreck & Reference is a ferocious experience. Both in sound and stage presence, instrumentalist/electronic architect Felix Skinner and drummer Ignat Ferge (who also share vocal duties) demand your attention. You are drawn in just as much as you’re violently grabbed by their sound. 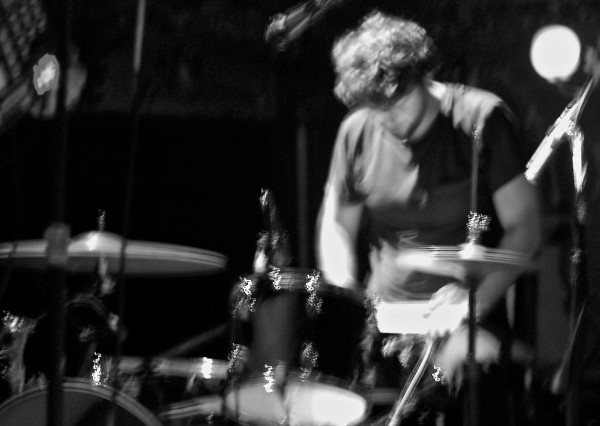 If any of you read my show review of Neurosis toward the end of last year, you may recall I talked about feeling my nostrils literally vibrating from the sound waves; as Wreck & Reference played, there was a meditative moment when I shut my eyes and simply allowed the sound waves to hit my entire body like a wave crashing to the earth. I can’t recommend their music any more highly, especially if you appreciate artists who push the boundaries we sometimes put around music. 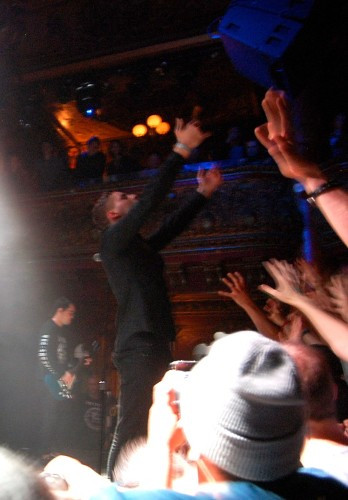 And now, Deafheaven — or if you want to prove how “trve” you are, DFHVN. All joking aside, the excitement was palpable in the room. The enthralling frontman, George Clarke, had the crowd under his control like a potter molding clay before even uttering a word. With every hand motion, the crowd only grew more taken by the whole “show” aspect before a single note of music had been played.

I note this particularly because, if you’d seen George outside the venue a mere three hours earlier, as I did, you wouldn’t have imagined that the calm, polite gentleman who welcomed his girlfriend into the venue was the same crazed looking frontman only a few feet away from me. But this is actually important and good — it’s a display of the freedom that art grants to performers; I feel very certain that while performing, George is able to separate himself from frustrations that he may never be able to put into words. 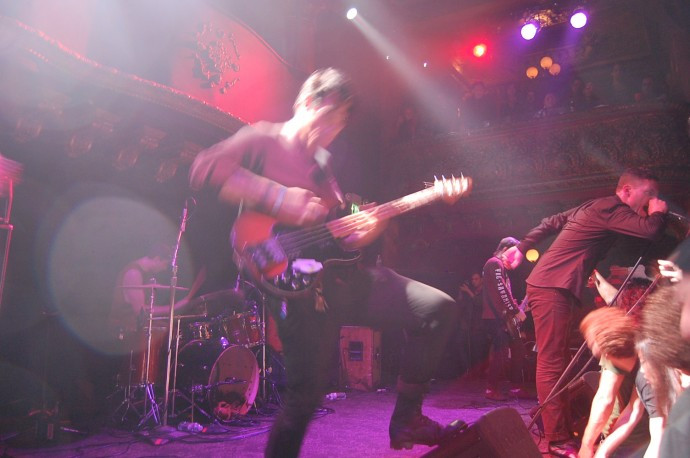 The whole band was clearly doing what they love to do, and their hometown crowd was abundantly enthusiastic in their show of gratitude. Opening with “Dream House”, cacophony and melody became one as drummer Dan Tracy pounded out the blasting beat that begins this consuming track. Understandably, the set seemed to be about half of Sunbather along with older tracks. While I distinctly recognized some songs, at some point I became so caught up in the experience that I didn’t really care to try and differentiate what they were playing. I was so truly grateful to be seeing a band I genuinely respect, playing as a tight unit for a hometown crowd. 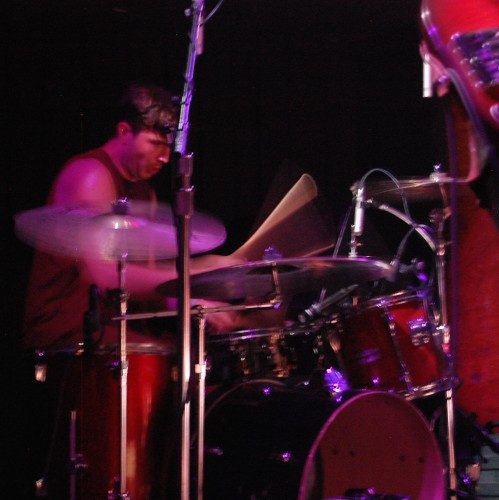 I wasn’t able to stay for Deafheaven’s “curtain call” as I had to catch my train back to the home of my friends where I’ve been staying as of late; but then as I left something unique happened. If only to fully remind myself why I’m a Deafheaven fan, I listened to Sunbather from top to bottom as I took my train ride home for the night.

Thanks again to Islander and No Clean Singing in general for allowing me to share my rants with an audience who may possibly appreciate them — and definitely much more than the people I’m usually around, who are still puzzled about why I listen to metal. Also thanks to Stephanie Marlow, who arranged for me to have a photo pass for this show.

4 Responses to “DEAFHEAVEN AND WRECK AND REFERENCE: LIVE IN SAN FRANCISCO, JULY 2, 2013”