Now, strictly speaking, From The Abyss They Rise is a compilation album, comprising an EP’s worth of new tracks combined with a collection of rare tracks and early demos. For the purpose of this review I’m going to be focussing entirely on the EP itself, although that’s not to say that the rare/unreleased material is without merit – “Enter The Pantheon” (the band’s first ever demo) and their cover of Emperor classic “Thus Spake The Nightspirit” in particular are definitely worthy of your interest and attention.

These new tracks are the first Pantheon I have written/recorded with the involvement of new guitarist Aethyris (aka Shandy MacKay – Horizon Ablaze, ex-Absu, as well as live session work for both Melechesh and perennial NCS favourites Khonsu), and his impressive talent and pedigree certainly serve the band well on these five songs, adding a touch more proggy ingenuity and melody to the band’s acid-drenched Black Metal assault. 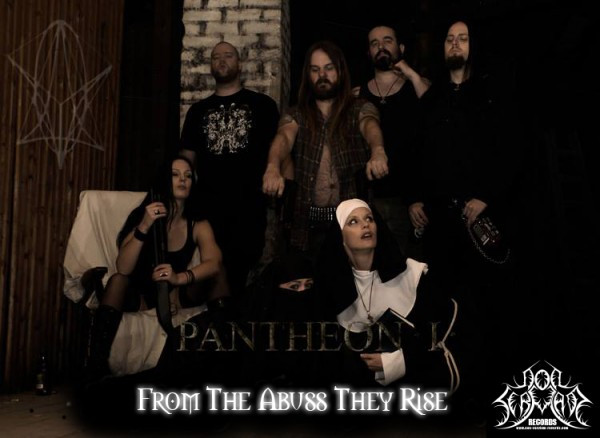 That’s in no way saying this is a complete transformation for the band. After all, they’ve always had a subtle progressive edge to their music, and they’ve long been fond of lacing their frenzied attack with touches of dark melody and subtle nuance, often courtesy of Julianne Kostøl’s sublime cello work. It’s just that things on From The Abyss They Rise seem slightly less dense (though admittedly, only ever so slightly) and more layered and intricate beneath the familiar storm of acid-drenched blasting and scalding riffage

Though it may only be a small change, the addition of MacKay to the writing team seems to have resulted in adding an edge of dark majesty to the band’s sound, ever so slightly akin to Armada-era Keep of Kalessin – which is particularly interesting since all the signs point toward KoK themselves having moved in the direction of an altogether proggier, more melodic sound overall.

“Pariah” immediately demonstrates this, with its prominent acoustic and clean guitar parts interspersed between eruptions of seething blackened riffs and flaying hooks. Vocalist Tjalve is in particularly fiery form throughout, spitting vice and venom with ugly, brutal intensity, while the song’s mid-section is a conjuration of epic grandeur and solemn beauty, Kostøl’s haunting cello melding seamlessly with MacKay and Sagstad’s intricately melodic guitar work and Seidemann’s supple bass lines – all backed by blast-master Mads Guldbekkhei’s subtly restrained and nuanced drumming.

The track ends in a blaze of high-velocity glory and soaring blackened melody, before the twisted riffery and anxiety-inducing aggression of “Martyr” blasts away the sombre gloom with its sheer sonic savagery. The left-turn into rippling, Spanish-guitar inflected melody is an unexpected, but fascinating, shift, and one which adds a sense of decadent splendour to the proceedings – particularly when matched with Tjalve’s paint-stripping screams and wounded howls of vengeful fury. The song’s bridge takes things down a darker path, Guldbekkhei’s rippling drum work providing an ominous foundation for an elegant edifice of haunting ambience and tortured melody, before the whole thing concludes in a blasting, blazing, bludgeoning frenzy.

The ghostly strings that introduce “I’ll Come Back As Fire” continue to showcase Kostøl’s classical influence on the band’s sound, weaving a phantom presence amidst the relentless march of taut, strangling riffage and bone-rattling drums that follow. The song’s solemn, slow-burning approach is heavy with dark promise and brooding atmosphere, eventually detonating in an explosion of ravaging blast beats and dissonant strains of anti-melody, before once again settling into a relentless, hypnotic death march toward dissolution.

“What Lies Beneath” starts out as a funereal procession of bleak cello melody, but this is quickly dispelled by the torrent of blistering aural violence that follows. Yet the song is much more than just a simple piece of blackened antagonism and feral aggression, although it certainly brings both elements to the table in almost overwhelming quantities. Rather, it progresses and transitions smoothly between passages of lithe, serpentine melody and bleak majesty, and eruptions of searing venom and feverish intensity, resulting in a song both mesmerizingly unpredictable and punishingly powerful.

The last of the band’s new compositions, “From The Abyss They Rise”, is by far the shortest and most direct of the songs on the EP, a swift count-in the only warning before a whirlwind of caustic tremolo guitars and sharp, stabbing strings is unleashed, amidst an avalanche of abrasive drums and blasphemous vocals. After several minutes of unrelenting, blasting vehemence the song suddenly blossoms into something far more melodically complex and hypnotic, languid guitar chords providing an expansive canvass for Kostøl’s eerie, flowing cello. The song climaxes in an acrimonious assault on the senses, as rabid blasting transforms into convulsive heaviness one final, frightful time.

From the Abyss They Rise is coming your way from the Dutch label Non Serviam Records on August 14. Listen to “I’ll Come Back As Fire”below.

5 Responses to “PANTHEON I: “FROM THE ABYSS THEY RISE””