Let’s face it: Kentucky is a very hard act to follow. In my case, it would probably be impossible for anyone, including Panopticon’s Austin Lunn, to re-create that experience of slack-jawed wonder when I first heard it. But Panopticon’s new album Roads To the North isn’t a re-creation of Kentucky, any more than Kentucky was a repetition of the albums that preceded it. It is, however, every bit as good.

The Panopticon albums with which I’m familiar (from Collapse on) have been very personal records. They’re a function of Lunn’s moods and the subjects that happened to inspire him when he wrote the songs. Social Disservices was full of righteous fury. Kentucky reflected Lunn’s deep feeling about the history and culture of the state he then called home; it dealt with tragic aspects of Kentucky’s coal-mining industry, but you could also hear in the music that it was at least equally inspired by feelings of affection and passion for the place.

Unlike the last two albums, political themes don’t run through Roads To the North, or at least not as overtly. As Lunn has disclosed in interviews, it’s more a reflection of changes in his personal life over the last several years, including time spent in Norway learning a new profession (as a craft beer brewer), relocating from Kentucky to Minnesota to practice his new skills, and becoming a father, as well as changes in his perspectives about the world around him. But although the music may not be as politically charged as before, it’s no less passionate.

There’s plenty of heavy, hard-charging intensity in this album, but even at it most electrifying the mood is generally one of pulse-pounding exuberance, more joyful and liberated than raging. There are more than a few passages when the music even becomes sweepingly panoramic. And although the scathing musical motifs of Nordic black metal have been important features of previous Panopticon albums, they’re minor players in Roads To the North, which has as at least as much in common with Scandinavian melodic death metal and post-metal.

The roar of a cold wind, the crunch of boots on ice, and the cries of a wolf begin “The Echoes of A Disharmonic Evensong”, but jabbing riffs, blazing guitar leads, and galloping rhythms are at least as prominent in the song as the ripping tremolo-picked segments. That song begins the album, and big galloping and jabbing riffs also play a prominent role in the album’s closer, “Chase the Grain”. “Where Mountains Pierce the Sky” rocks as hard as it races; “Capricious Miles” chugs and rumbles as much as it blasts and writhes.

What hasn’t changed, though, is Austin Lunn’s talent for writing compelling melodies that hold fast when you hear the songs and pull you back to hear them again — and this is his most melodic and instrumentally accomplished album yet. The melodies are often richly layered, with a multitude of instruments (including orchestral-styled keyboards) employed to give them added depth and variety, but even when they’re as spare as the slowly plucked strings of a banjo, they get their hooks in your head quickly and firmly.

One of the qualities that made Kentucky so remarkable was Lunn’s versatility as a musician and his talent for juxtaposing dramatically contrasting styles in the music. On that album he created a surprising harmony between adrenaline-fueled, blackened metal and Appalachian folk music, and he pulls off a similar feat in Roads To the North. Even in the most blood-rushing of the metal songs, Lunn interweaves strikingly different textures but makes the changes and contrasts seem completely natural.

Sandwiched in the middle of “The Echoes of A Disharmonic Evensong” the racing slows to make room for an interlude of drifting guitar-and-flute melody accompanied by bursts of drum thunder. No sooner has that song finished in a big burst of adrenaline than the next track (“Where Mountains Pierce the Sky”) shifts gears dramatically, with a mid-paced acoustic introduction — a beautiful folk melody that sounds like something from the Scottish Highlands performed by acoustic guitar, violin, and Native American flute. The heaviness of “Capricious Miles” is leavened by another contrasting instrumental section of slow, reverberating guitar melody, almost jazzy bass playing, and shimmering ambient music; it sounds like a ramble through light-dappled woods along a creekside on a summer’s day. 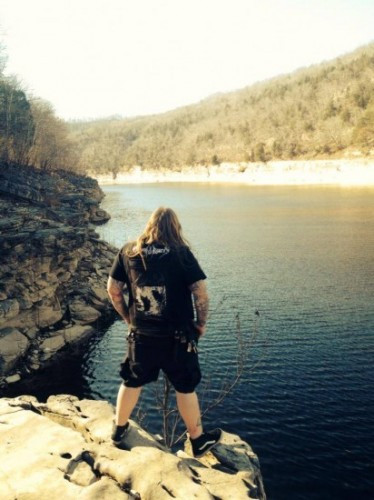 Similar images spring to mind during the slow, hypnotic beginning of “The Sigh of Summer”, the rippling melody creating a bright, meditative, almost dreamlike sensation. Even as the song gradually becomes heavier, it made this listener imagine walking on an isolated beach, the tide rolling in, the sun glinting on the silver, an ocean wind blowing landward across the waves. Even later still, after the song has reached full acceleration, a violin takes its turn carrying the melody, and an echoing flute brings it to a close (along with more footfalls on the ice). A dobro steps into the lead role during a quiet interlude in “In Silence” and is joined by the flute to provide moments of wistfulness in “Chase the Grain” — a multi-hued track that also includes sweeping orchestral instrumentation and the processional boom of timpani.

The contrasts don’t stop there. The mid-section of the album consists of three songs denominated Parts 1 – 3 of a trilogy called “The Long Road Home”. Part 1 is an acoustic instrumental named “One Last Fire”, with a recurring sun-lit melody that runs through it. The song begins with the slow picking of a banjo, joined by dobro, fiddle, and the trill of what sounds like a mandolin, and then it launches into a bluegrass-flavored romp. Over the course of the song, the banjo, fiddle, and guitar take turns in the lead role. It’s such a vibrant, memorable piece of music that often it’s the first song that pops into my head when I’ve wanted to revisit Roads To the North. I can’t think of another metal album where one of my favorite tracks is a country tune, but that’s Panopticon for you.

“Norwegian Nights”, which comes right after the close of the trilogy’s last song, is another dobro, guitar, and fiddle number — slow and memorable, but with vocals this time (clean ones).

Throughout the album, Austin Lunn again shows his impressive versatility and skill as a musician (as well as a songwriter) — his dextrous bass playing and acrobatic drumming are as attention-grabbing as anything else — but he also has some impressive help on this record: Johan Becker’s violin playing throughout the album is fantastic, and Colin Marston deserves credit for the epic orchestral arrangements. A trio of guest vocalists also contributed — Ben Smith (When Bitter Spring Sleeps, S.A.P.) on “Capricious Miles” and “The Sigh of Summer”; Winterherz (Waldgeflüster) on “In Silence”; Dave Condon (Altar of Plagues) and Tanner Anderson (Obsequiae, Celestial) on “Chase the Grain” — though Lunn’s caustic howls (and a few ventures into clean song) carry the lion’s share of the vocals.

Panopticon may not be alone in creating a musical space where distinctively American folk music and powerhouse melodic metal co-exist in complementary roles, but Roads To the North is further proof that no one else is doing it so creatively, so passionately, or so well. It’s a strikingly multi-faceted work that will surely stand as one of 2014’s best releases.

Roads To the North was engineered and produced by Colin Marston and it’s due for release on August 1 as a double-LP by Bindrune Recordings and Nordvis. Pre-orders for the vinyl (which will come with download codes) can now be placed here for European deliveries and here for the U.S. CD pre-orders will be available soon.

You can listen to “Chase the Grain” at this location, where it premiered about a month ago. In addition, to celebrate the announcement of pre-orders yesterday, “Capricious Miles” (Part 2 of “The Long Road” trilogy) has now become available for listening on YouTube. Check it out below.