If you’re like me, you have a hard time getting your game face on for the work week when Monday mornings roll around. But assorted friends of mine pointed me to two new songs yesterday that seem tailor-made to juice up all those sluggish Monday-morning brains out there, and I’ve also included a review of a murderous two-song EP plus one phenomenally good new Zombiefication track I found on my own that will finish the job nicely. Death fucking metal.

In June 2013 I praised a three-song demo by Detroit’s Temple of Void, which included some truly staggering, mega-weight riffs and a blanket of indigo melodies, usually delivered at a lumbering pace, along with elements of viscera-draped death metal a la Autopsy, a pummeling of Bolt-Thrower-style hammer blows, and some inspired psychedelic guitar solos. Now these dudes have finished a full-length album (Of Terror and the Supernatural), and yesterday an advance track became available for listening.

“Savage Howl” is a fitting name for this thing. The big gear-grinding guitar chords are savage, the gruesome deep-throated vocals are savage, the morbid melodies are savage, and when the band start rolling out a repeating cycle of enormous, stomping riffs, you will headbang savagely. This is top-shelf supernatural death/doom and a really enticing teaser for the album to come.

Of Terror and the Supernatural will be released by Rain Without End Records. I haven’t yet seen a release date.

(thanks to KevinP and Vonlughlio, both of whom linked me to this monstrosity) 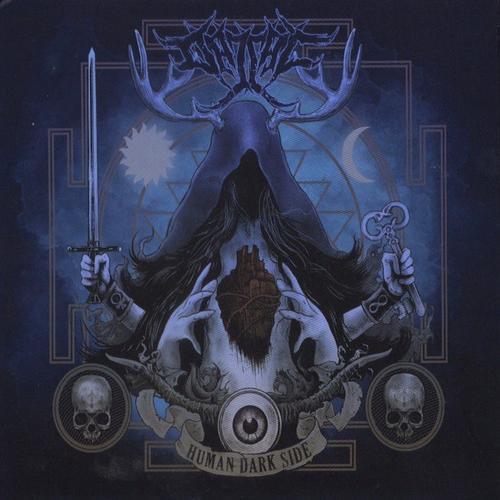 As a trained medical professional I have to advise that before listening to the next song you strap yourself into the NCS Sofa Harness (pat. pend.) and put the NCS Rawhide Bit (pat. pend.) between your teeth so as to reduce the risk of biting off your tongue and shaking your vertebrae loose from their moorings. The song is named “Human Dark Side” and it appears on an album of the same name released early this year by a death metal band named Dajjal from Bandung in Indonesia. Metal-Archives says the band was formed in 1994 and that this album follows their debut record by 14 years. Better late than never, because holy shit, “Human Dark Side” is really good.

The song combines merciless brutality with blazing technical flashiness. It’s a high-speed flurry of vicious riffs, snare-heavy drum artillery, and jolting rhythms (with a blistering solo in the mix, too).

Human Dark Side was released by Heretic Records. I’m not sure about how to get a legit copy of it.

(thanks to TheMadIsraeli for the tip on this one) 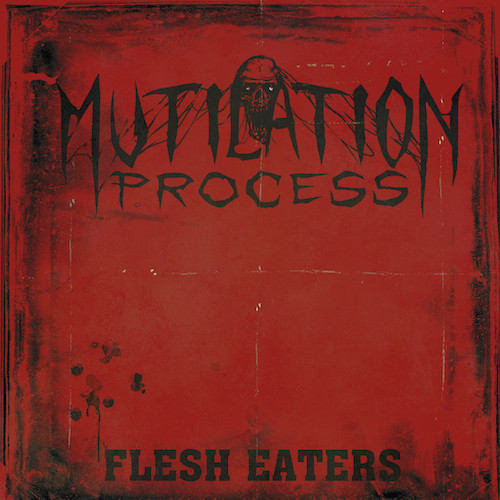 Mutilation Process is yet another collaboration of experienced musicians — in this case Markus Makkonen (Hooded Menace, Sadistik Forest) and Cris Pervertor (Satanika, Massemord) — with a yearning to express their love for early 90s death metal, but they’ve also incorporated a lyrical affection for horror and gore films from the 70s and 80s. They’ve prepared a two-song EP entitled Flesh Eaters that I understand is intended to serve as a preview of a full-length album (Epidemic of Terror) projected for release in 2015.

The title track (which is now available for streaming) moves between thrash-infused whiplashing and jackhammer chugging that’s guaranteed to get heads moving. You can feel the old punk spirit moving through the song’s rhythms, too. “Possessed By the Worms of Satan” delivers another dose of highly infectious jagged riffs that send a powerful jolt to the brainstem, along with a diseased melody that writhes like fattened maggots. And the vocal vomit in both songs is rotten to the core, just as it should be.

Flesh Eaters is due for digital release on July 29 by Horror Pain Gore Death Productions and can be pre-ordered via the Bandcamp link below. I’m including the new song stream from both Bandcamp and YouTube. 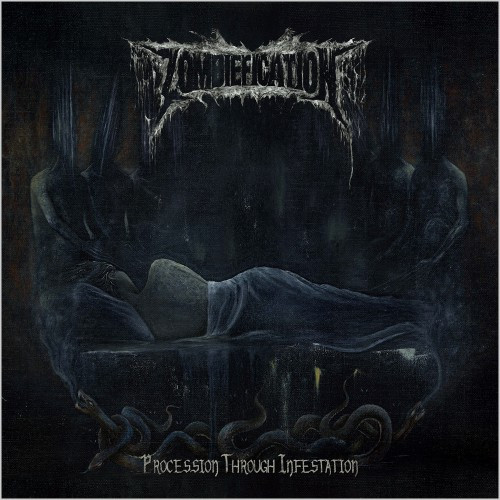 I’ve saved the best for last.

As we’ve previously reported, the third album by Mexico’s Zombiefication — Procession Through Infestation — is coming our way on vinyl and CD via Doomentia. We posted the first advance track back in mid-June, and today I saw that a second one has now appeared on Bandcamp.

The newer one is named “Infestation”, and it’s unusually good, mainly because so many different things happen during its seven-minute course: galvanizing buzz-saw riffing and d-beat rhythms reminiscent of the old Swedish school; unstoppable freight-train chugging; off-speed sections that deliver sledgehammer bass blows paired with chiming guitar arpeggios; attractive melodies; a couple of arena-ready, squalling guitar solos; and even a killer drum solo at the end (and when’s the last time you heard an honest-to-god drum solo in a death metal song!).

Actually, the drumming throughout the song is fantastic, as are all of the instrumental performances. Mr. Hitchcock’s vocals are a thing of terrible beauty, too, moving from cavernous roars through wolfish howls into soaring, impassioned yells. A really fantastic song.

I’m still not sure about the Doomentia release date, but we’ll let you know when we find out.

4 Responses to “JUMP-START YOUR MONDAY WITH TEMPLE OF VOID, DAJJAL, MUTILATION PROCESS, AND ZOMBIEFICATION”