(DGR wrote this review of the new album by Septicflesh from Greece.)

Greek mythology tends to lend itself pretty well to the idea of the massive. You don’t get to call your album Titan and have it be something other than an attempt at sounding absolutely huge. When SepticFlesh announced that as the title of their new album, you had to have a pretty good idea of what you were signing up for. Truth be told, SepticFlesh have the sort of sound that lends itself to such a title.

They’ve had years to hone their craft, and the basic elements of their sound — the symphonic and orchestral and the death metal — can shoot from being reserved and foreboding to sounding absolutely gigantic within the space of a second. Over the span of several albums, SepticFlesh have found a really good balance of just how much of each to drop into a song, while walking a very fine line and tinkering with a very delicate formula. Rarely have they ever gone the “crank everything up to eleven” route and reached for entire bombast on all fronts — though that approach has been proven to work, and when SepticFlesh choose to do it, they do just as well.

With The Great Mass, the band really captured lightning in a bottle, letting the symphonic and the death metal sides of the band war with each other and meld into an equilibrium, and it resulted in a great disc — as both a collection of songs and, if you were lucky enough to find one of the bonus editions with just the orchestral pieces, as a symphonic movement as well. If SepticFlesh had decided to make Titan into The Great Mass 2: Mass Harder, then I imagine people would’ve lined up front and center to lavish praise upon the band, because hell, that album again would’ve absolutely been acceptable. That’s why Titan is an interesting album — because for half the disc, they didn’t do that. Instead, they toyed with the foundations of the band and messed with the formula that had been crafted to its breaking point. The result is an album that does live up to its name — Titan is absolutely massive sounding, but not necessarily as death metal as the band have been before. 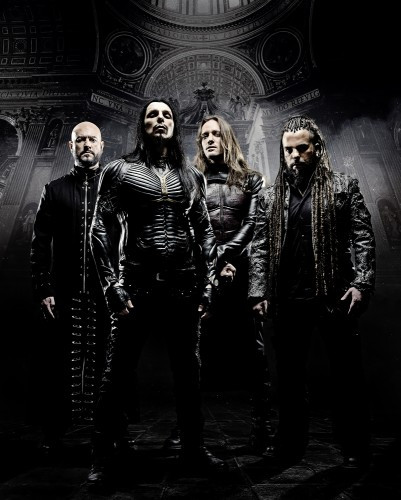 Titan is still a SepticFlesh album at its core — if you’re a believer in the philosophy “If it ain’t broke, don’t fix it”, then you’ll appreciate that the band merely fiddle with the structure that has worked so well for them, rather than wholly reinvent their sound. You’re still guaranteed a ton of Seth’s sulfurous growls bellowed from the depths of the earth, as well as the dissonant and somewhat campy clean singing that has been a hallmark of the band. You’ll also note that from the get-go that Titan is one of those albums that sounds expensive. Wholly apart from the quality present on the disc, at the very least you can tell that the band got every last bit of their budget out of Titan, packing this thing to the gills with different orchestral trills and odd instrumentation wherever they could.

Like its namesake, Titan is a very slow and methodical disc in comparison to its predecessor The Great Mass. For a long time I swore by that album’s opener, but later found myself won over by the speed and sheer brutality of “Five-Pointed Star”. There really isn’t a song on Titan that gets up to the tempo of “Five-Pointed”, but “Burn” manages to come very close, while also being the slimmest song in terms of orchestration. “Burn” also has a wonderfully bizarre chorus that seems like one-third chant, one-third dissonant singing, and one-third growled (with the tiniest smudge of disinterested reading). I know it has turned some people off, but I’ve found that it gives the song an element of camp, as if Ghost managed to interrupt the song for its chorus before SepticFlesh returned to a hammering section of blast beats and chord progressions.

Most of Titan, though, takes its time, with songs accelerating to the breaking point while as a whole feeling reflective of how the orchestration was written. Titan focuses heavily on the band’s symphonic element, and the orchestral pieces for this disc are very well written, ranging in part from being the highlight of a song to almost morphing the album into a movie score — even giving in to the excesses of Michael Bay screaming, ‘More brass! I need more BWAAAHM in this song!’. This time, the death metal part of SepticFlesh is in service of the band’s symphonic leanings; the two interweave together well again, but it’s clear who the champion in the tug of war is.

Although we’re talking about the tracks out of order, the album’s opener “War In Heaven” serves as a good sampling of what Titan has in store for its listeners. It’s one of those songs that feels like an album trailer in the form of a song, transitioning through multiple movements of sweeping orchestration and martial death metal and never sticking to one part for too long. The drumming during the first really tribal-sounding march of the chorus is also subversively difficult, with the snare drum hitting at times and in rhythms previous reserved for Meshuggah’s more complicated moments. That one section has the same sort of complicated, head-nodding rhythm that Decapitated incorporated into the verse parts of their song, “404”. This time, however, each death metal movement is either interrupted or amplified by a super-loud blast of orchestration and choir. The song has moments when it just fully stops to breathe, but in the background the orchestra is slowly building into its next big soundtrack for the battlefield being portrayed.

The album closer “The First Immortal” is another one that sees SepticFlesh really giving it their all. It’s one of the few intensely bombastic passages on the album, in which everything the band have played with throughout the record comes fully to a head. One of the things that becomes apparent after hearing all of Titan, including its titular stomper of a song, is that when the band decide to just say “fuck it” to any subtlety and let everything blare at its loudest, they can do it with the best; very few times has it ever felt excessive. The band get everything they can out of those moments, and it all comes full circle on “The First Immortal”. It’s a highlight song and a hell of a way to close out the disc.

What Titan is not, though, is a full-blown sequel to The Great Mass. People who come to this disc expecting that are going to be mildly disappointed. About half of the album could be considered the sequel to that one in some form — songs such as “Order Of Dracul” and “Ground Zero” feel like they were written in that album’s style — and the other half sounds like a full-blown orchestral piece that a death metal band managed to weave their way into. When they meet, it becomes a fully breathing organism of its own, one that lurches to life and thrashes about, a slow-moving, mid-paced, leviathan of an orchestral death metal album. It paints SepticFlesh as both insanely talented in their compositions and performing skill, and insanely ambitious.

I imagine that Titan is going to be one of those albums that, when performed, is never going to feel quite right unless SepticFlesh have that backing symphony doing things live with them. In fact, given just how much the symphonic works win over against the band’s metal side, it wouldn’t be too shocking to hear SepticFlesh just do a full orchestral score as a standalone release, rather than including orchestral pieces as bonus features for the deluxe versions of their CDs (as an aside, the Titan deluxe edition is also really good and comes highly recommended in the same way The Great Mass’ symphonic bonuses were).

Titan is a Goliath of a disc, a huge-sounding album that manages to capture every single voice, instrument, and implement that the band worked into each song. That they managed to accomplish this without losing much in the mix is an incredible feat in its own right. Titan is an intriguing and challenging album, one that does win the battle for your tastes over time, and it continues the trend of SepticFlesh crating some of the most densely packed albums out there; this one is still offering surprises long after its release.

Titan was recorded in collaboration with the Prague Philharmonic Orchestra and Children’s Choir and it’s out now on Prosthetic Records. Below you can hear a full stream of the album, followed by the bonus instrumental track (“Dogma of Prometheus”) that combines five orchestral pieces from throughout the album.