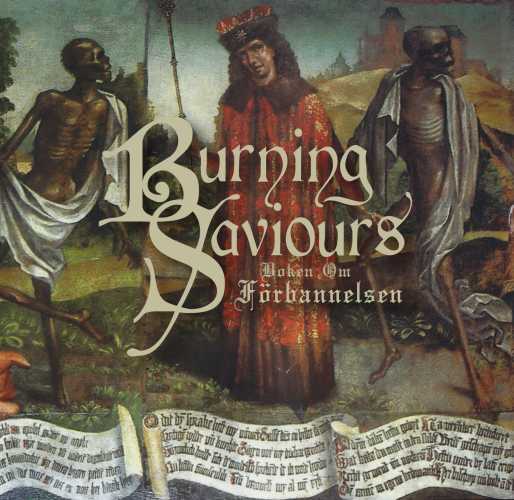 The combination of doom metal and rock from the 70’s has became actual genre nowadays. It feels like a damned lot of people miss the good old days when things looked more or less simpler. Good melodies, a recognizable retro sound, and lyrics on familiar themes are enough to satisfy our needs, and it’s not necessary to be original in that case.

The Swedish band Burning Saviours have been playing doom metal / hard rock since 2004 in the name of almighty Pentagram! A few successful releases have brought Burning Saviours a well-known reputation, and I Hate Records has decided to remind us about the band’s deserts with the release of a compilation named Boken om förbannelsen. I got in contact with Mikael Monks (guitars, vocals) to clarify details of the album.

Salute Mikael! On April 11th I Hate Records released Boken Om Forbannelsen, a compilation of four 7” singles of Burning Saviours. What is the brief story behind this release?

Basically we wanted to release the singles on CD as well. Many people asked for it, so together with our old record company I Hate we made it come true.

Why did you choose the form of 7” singles for the last Burning Saviours’ releases? As we see, these songs complete a real album!

We wanted to do something different and more exciting than just releasing a CD. The singles came with different items with each release and made them collector’s items.

Mikael, there are two songs in Swedish on this album, and indeed I would like to see more tracks with lyrics in your native language… Why is it important for you to express your feelings in this way?

Since Swedish is my native language it’s much easier to write lyrics. And using a Swedish or any northern language fits Burning Saviours’ sound perfectly.

And what are these tracks about? Why did you choose Swedish lyrics for these two songs in particular?

“Förbannelsen” is about A Curse. To live as a dead person. It’s a twist of a zombie saga. “Hon Dansade Med Döden” is about a woman at the end of her life. Death comes to visit her in her home and they dance happily and she feels young again, and then she follows Death into his kingdom.

Do you remember the different periods of recording-sessions for these singles? Did you record all of these tracks in similar conditions?

We recorded two songs at a time. Each single was recorded in the same studio, but a few months between each other. There weren’t any problems with that because we planned it that way from the beginning.

Seven years have passed since the release of your last full-length album; do you have some new tunes for listeners?

Yes. We recently signed to our old record label Transubstans Records for our next album. A new song called “Sons Of The North” can be found at our Facebook page.

How many songs do you want to put into the new album? And can we suppose that the album will be totally in the vein of “Sons of the North”?

I think it will be seven or eight songs. The album will consist of both songs in the vein of “Sons Of The North” and songs reminiscent of older Burning Saviours. But overall I guess this one will be a bit heavier.

I see that these 7” singles “Forbannelsen”, “The Offering”, “The Nightmare”, and “Hon Dansade Med Doden” have similar art-works and that the compilation continues this line of that “Dance Macabre” series. What drove you to choose this form of decoration?

It is a macabre and bizarre painting which fits the theme of the singles. Konrad of Nightripper Records suggested the artwork and we approved.

Hm, Konrad took Bernt Notke paintings for these art-works, but I believe there’s one short part of it left – will you use it for the next release?

He, he. No, we leave the rest of the artwork at the museum 😉

I read that Dance Macabre (the subject of these paintings) is an exclusively European artistic genre, as South America had another point of view on the subject of death, and we had no such images here in Russia, for example. How do you decrypt this subject and its historical role from your own point of view?

I’m not sure I understand the question. But people have always been afraid of death and what’s gonna happen after death happens. Personally, I hate religion but old thoughts of death and superstition are very interesting to me.

Can we suppose that doom metal in itself was a kind of continuation of this tradition? A kind of incarnation of the fear of death through the music?

I think doom has the same type of lyrics as other metal music. But doom has a special feeling  to it. A darker and heavier tone to it. It’s hard to describe. But if you’re into doom metal you instantly can feel it’s doom you’re listening to.

I believe that “Burning Saviors” isn’t only the name of Pentagram’s song for you. What meaning do you attach to the band’s name? Perhaps this question is more about the role of Christian belief in your life and heavy metal…

Since we are atheists in the band we thought it was cool to use Burning Saviours. It can both mean that you are burning the saviours in a blaze of fire or flaming demons of hell trying to save you from life as a Muslim or a Christian.

Okay, then the new song “Sons of the North” could be labeled as a pagan one. What do you think about the popularity of paganism during recent years?

I think paganism today is a way of preserving some of the old ways of living. To be down-to-earth instead of believing in fairytales and prophets that may never even have existed. I take sides with pagans against the big religions of today. I think my heritage is wonderful, the way we used to live near and with nature.

What is your Top-5 list of the most authoritative Swedish doom bands?

I’m not very fond of these lists but I will not only stop at doom bands: Grand Magus, Opeth, Witchcraft, Graveyard, Katatonia…

Thanks for your time Mikael! Have you something more to say for our readers?

Burning Saviours is not here to make new music. We are here as a tribute to heavy and old heavy music. If you expect us to make something unique you are listening to the wrong band.

One Response to “AN NCS INTERVIEW: BURNING SAVIOURS — “BURNT OFFERINGS FOR ELDERS””