One of the things that consistently surprises me about music, in general, is how much some artists can change in their evolution yet still remain fundamentally the same. Fallujah released a pretty killer debut with The Harvest Wombs, a blitzkrieg of melodic technical death metal madness with a seasoning of Allan Holdsworth fusion thrown on top of it; the sound was the essence of ethereal yet feral. It was their way of achieving a sort of space-death sound, and it worked.

Of course, the other elements in the music helped, too. Fallujah pulls from a strange bag of tricks and smashes them together. The combination of death metal with a lot of post-y elements, including some borrowed from that end of the Black Metal spectrum, has cemented a sound I would argue is recognizably Fallujah, signature in nature.

The Flesh Prevails is a logical step forward, an attempt to bridge the technical showmanship of The Harvest Wombs with the spaced-out fusion atmosphere of the Nomadic EP. The end result is death metal that is equal parts brutal and Zen. Depending on your mood, you could windmill to this until you get whiplash, or sit around stoically contemplating the meaning of your life. It’s an odd paradox of sound that’s hypnotic. 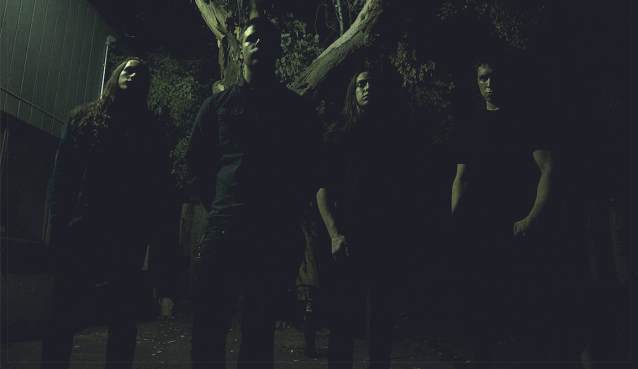 The album has a lot of the same foundational elements of the Fallujah sound exhibited on The Harvest Wombs, but the greater focus on ambience, melody, and big, lush soundscapes shows that the band is targeting a different sonic objective this time. I’d almost call this a sort of slow-burner tech-death. You feel like you’re being gradually swallowed and digested, even during the explosions of blast-beat-saturated riff-a-thons.

Despite the fact that some moments on this album, such as “Carved in Stone”, are completely fucking manic and fly at the speed of light, the instinct isn’t to get up, air guitar, and windmill; it’s more like being knocked flat on your ass and stuck in a mental ecstasy high. You space out and let the sound overtake you, and it’s an odd feeling. I admittedly found the album a curiosity, but the first day I got access to the promo I listened through it twelve times. It was daytime when I started listening; the last time was at, like, fucking three in the morning.

Of course the technicality is there. Some of the riffs (the first single “Sapphire” comes to mind) are absolutely mind-blowing, woven-note tapestries that are suffocating in their depth. What’s insanely impressive is that amidst the instrumental acrobatics is a smattering of hooks and little melodic motifs that become earworms even if they only occur in the song once. It’s those fucking post-y, delay-soaked leads, man. They know how to work that shit.

I have to confess, The Flesh Prevails is a hard album to describe, though I’m trying. But if I were to resort to vague metaphors that tell you nothing about the music itself, I would say it’s like a cosmic antimatter asteroid that basks everything in a gorgeous shimmer before its impact completely decimates all life surrounding the impact zone.

I’ve definitely listened to the album non-stop, and it’s one of the best I’ve heard all year for sure. It’s worth listening to for the gripping experience if nothing else. Fallujah are definitely trying to carve a niche for themselves, creating an ambience-heavy tech-death sound that has kept me coming back for more. I love what these guys are doing and can’t wait to see what comes next. I’d be picking this up if I were you. It’s masterfully composed modern tech-death.

18 Responses to “FALLUJAH: “THE FLESH PREVAILS””