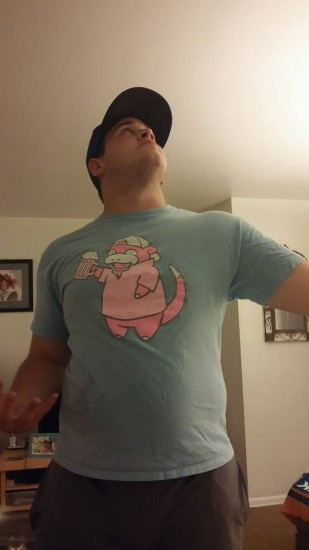 (In this post, Dane Prokofiev returns to NCS with a new installment in his Keyboard Warriors series, in which he poses unpredictable questions to metal writers of all kinds. Here, he interviews our friend Tom Campagna.)

Pokémon and metal. You never thought these two words would appear in the same sentence, eh? The two objects seem like polar opposites, sharing a relationship resembling the one shared between light and darkness, hot and cold, truth and Tyranny of Tradition, God and Satan, etc.

But metal writer Tom Campagna (ex-The Number of the Blog, ex-Metal Injection), who is an ardent fan of the Pokémon role-playing videogames, thinks the two share similarities. As one of those dudes pining to be “the very best like no one ever was,” you really wonder how he still finds the time to teach high school mathematics, write for About.com Heavy Metal, and occasionally contribute articles to some other metal websites.

I love metal because of the excellent release of emotions that one has while listening to it. The history of the genre is also something that really strikes me as important, too. For a kid who was constantly quizzed by my father about “who is this band” and “what song is this,” I kind of developed that into my own world of music.The small size of the scene is also nice because you can certainly talk to members of your favorite band and sense the sheer level of appreciation from these individuals. People who scoff at heavy metal have never given the genre a chance; but if everybody loved heavy metal like I do, the scene would be enormous, and we wouldn’t want that would we?

Similarly, I wish fellow metal fans could understand the strategic and visual appeal of the game and get into it as well. But then I imagine every metal appreciator playing Pokémon, and suddenly I don’t wish for that anymore.

Please, I’d never be able to enjoy bands like Dinosaur Jr. and Daft Punk if I listened to all these “tr00bies.” Let me enjoy my damned music in peace. I mean if I did everything that metal fans are “supposed” to do, I’d be conducting class using the Necronomicon and spraying blood everywhere while we examine the depth and force used to have somebody fucked with a knife. Not to mention the overt Satanism, where—with an inverted cross burned into my forehead—I shout at the kids in the back with my mic stand made of real human femurs while I’m dressed rather garishly, clad in leather and spikes from head to toe like Rob Halford (which is hot as hell, mind you).

Because—as stated earlier—I lust for the past. I started playing Pokémon when I was 11 years old, and looking at my ability to categorize and collect things (e.g.: keychains) from my early days and the more recent obsessions (e.g.: rare CDs), Pokémon seemed like a natural fit. Furthermore, my mildly perfectionist nature created a need to want to “be the very best,” most likely “like no one ever was” (so said a prophet once or twice). I mean how can you top a five 31-IV Adamant Excadrill with EVs in Attack and Speed during a sandstorm? Easy answer, you can’t!

Yes, you can! A five 31-IV Modest Heatran, with EVs in Special Attack and Speed, that is holding a Focus Sash. 🙂

I can best that with a Skill Link, Rock Blast Cloyster holding Focus Sash. It is Shell Smashing its way in your general direction.

Is Pokémon metal? Why?

Pokémon is metal because much like the older fans of the (metal) game, we have sort of a “I don’t give a fuck what you think about me” kind of attitude. Also, it’s due to that ability to unleash your creations upon the masses and watch them wreak havoc on unsuspecting trainers. Those who seriously believe that their “Rattata is in the top percentage of all Rattata” have a serious ass-whooping coming to them. I can liken that to fans of Asking Alexandria getting steamrolled by Incantation; they just never see it coming. They are “blind to what is real.”

Heavy metal culture is essentially masculine and frowns upon anything cutesy or feminine, like BABYMETAL and Black Veil Brides. Pokémon would be considered cutesy, so that makes it something that heavy metal culture should be opposed to. Hence, how can you love both Pokémon and heavy metal?

Yes, of course it comes off as cutesy when your official mascot is an electric mouse voiced by a Japanese woman. It is hard to avoid the very obvious stereotypes. But when you have character designs like Garchomp, Rayquaza, and Metagross (among others), you can take your Pika-clones like Pachirisu, Plusle, Minun, and Emolga and stick them straight down Ken Sugimori’s throat.

It’s an absolute blast to combine heavy metal and Pokémon. It involves battles and attacking, much like driving your car down the road whilst listening to the new Midnight album and forcing your excellent taste in music upon those that Ice-T called out in that Body Count video for “Talk Shit, Get Shot”. “All we listen to in these streets is Drake, Drake, Drake!”

Do you think Pokémon culture is essentially masculine?

What is more masculine than complete control of your surroundings? You become the master of your own domain and small creatures. And peers will bow to your power over time (if done correctly).

Becoming the master of your own domain and small creatures… That sounds like power metal!

It could also be very thrash metal as you battle your way through the world, this time with 100% of your neck intact. I’d imagine Bobby Blitz being a wonderful voice actor for the series as he is just the cartoonish type of guy to help bridge the gap.

Which power metal album would you play while battling through Victory Road?

Not being the biggest fan of power metal leaves me at a slight disadvantage in this realm, however I do have some in mind that would fit. Helloween’s Keeper Of The Seven Keys Part 1 stands out, perhaps the aptly titled Ample Destruction by Jag Panzer fits as well. Oh and Painkiller because it just rips things to shreds.

Pokémon is quite like black metal as envisioned by Gorgoroth and Watain. This is because it promotes the idea that humans are the masters of animals and can do whatever they want with them. Although, unlike the two aforementioned bands, Pokémon trainers obviously do not use Gogoat heads for live performances. But they still do treat Pokémon like objects, such as discarding them if they do not have perfect IVs (aka good genes).

As someone who enjoys playing Pokémon and listening to black metal, how do you reconcile your moral values to those promoted by Pokémon and black metal?

The Gogoat point is taken and well, I am one for the disposal of the imperfect because why overpopulate my boxes with useless carbon copies of things that they are inferior to? I am absolutely a believer in the maxim that man controls man’s domain and others are there to serve him. I do not want to kill what I do not eat, however, so there is certainly room for companionship if nothing else.

Just for fun, which Pokémon do you think are suitable mascots for Gorgoroth and Watain?

By a twist of fate, you were born to be a metal writer and not a Pokémon master. Which was your most harrowing metal writing moment to date?

It might have been when I reviewed Attika 7’s (Evan Seinfeld of Biohazard’s new band) debut album for About.com.

I got an email directly from him about my 2.5 out of 5 and the fact that I called Blood Of My Enemies “the type of music that gets played during ESPN commercial bumpers and WWE events.” Needless to say I was getting “fact-checked” and told that I was “wrong” because so many other media outlets had disagreed with me. I still have the email lying around for a good chuckle every now and then.

Which was your most harrowing Pokémon moment?

Perhaps the first few times going through the Elite Four when I was a n00b 12- or 15-year-old, thinking that 30 Full Restores and Revives would do the trick; until I found out by battle 4 or 5 that I was sorely mistaken. (And of course, I saved before beginning this venture, making me battle and financially secure.)

Between these two harrowing moments, which one was worst? Why?

The Pokémon one because you can never be too sure about your overall preparedness. When I laugh at somebody calling me out on facts and pretty much philosophically calling my own opinion into question, it is just silly middle school girl nonsense.

Oddly enough, I never nickname any of my Pokémon. I had a friend of mine who used to use the word “Phat” as a prefix for all of his characters. I do wonder how Phatking is doing these days…

Which are the top ten most metal Pokémon attacks?

Which are the top ten most metal Pokémon abilities?

Which are the top ten most metal Pokémon (Mega evolutions included)?

If you had to choose between making a pilgrimage to Tokyo’s Pokémon Centre or Black Sabbath’s hometown, which would you pick?

Tough call, but I’d say Tokyo. My wife and I have always wanted to visit Japan.

What would you do there?

Nerd out in Japan of course. What else would a person who has enjoyed video games for nearly 25 years do there?

I dunno. Walk into wild grass and capture Rattatas? Get some exercise!

You could also go catch BABYMETAL’s live performance in a bright yellow Pikachu shirt. If you do, you would be the living embodiment of The Unmetal for that day.

I could also shove a corkscrew in my ear canal and I would get about the same result.  I’d much rather catch a twin bill of Sigh/Boris, and hang out with Mirai and Wata.