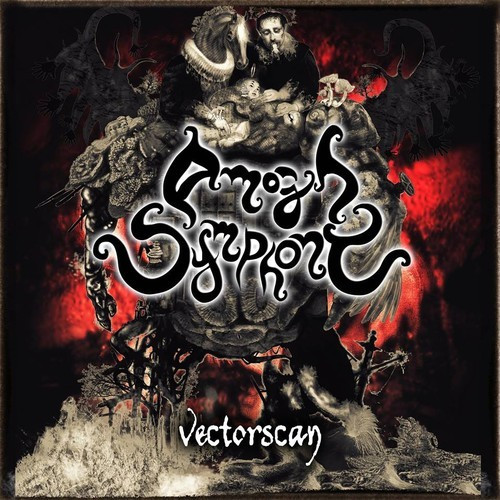 Amogh Symphony began as the solo project of an Indian musician named Vishal Singh. I’m pretty sure we’ve never written about Amogh Symphony before, though we’ve written on three occasions about another project with which he has been involved — Robots Pulling Levers. Amogh Symphony has recorded a new album (the band’s third) named Vectorscan, which this time is no longer a solo work but a collaboration between Singh, Jim Richman, and Andrey Sazonov.

One of the new songs on the album was posted for streaming on Soundcloud within the last 24 hours. Its title is certainly intriguing: “1289, voyeur will shine, fight for distinction, evolution is mine”. The Soundcloud page includes a lot of information about the album that I read before listening to the song, and that information is certainly intriguing, too. For example:

There are at least 8 guest artists on the album, including vocalist Kasturi Singh, who is Vishal Singh’s mother. The instruments used on the album by Singh or his guests, which were recorded in 8 different studios, include microtonal guitar with bow, Hangs, saxophone, harmonica, violin, accordion, guitar synth, Hawaiian and slide guitars, microtonal trumpet, fretless bass, electric piano, and Santoor-guitar hybrid.

The music also includes a loop of  cicadas recorded by Richman in the woods of Virginia. And the lyrics were written by Singh’s late grandmother, musician and singer Labanya Prabha Nath, in 1941 and were taken from her “book of songs”. The full lyrics are printed at this location, though they are mainly in Assamese.

The information summarized above is available in more detail here, with specific notes about each artist’s contributions. Perhaps needless to say, I was extremely curious about the music after reading it — and I had no idea what to expect.

The music is difficult to describe. It’s a head-spinning combination of syncopated rhythms, explosions of tech-metal guitar extravagance, shimmering keyboard ambience and sweeping orchestration, bounding bass noodling, a soaring wordless voice and spoken-word samples, meditative acoustic guitar instrumentals, conjunctions of dissonance and melody, and bursts of chaotic electronic noise. It’s multi-textured and complex, it probably has as much in common with jazz fusion as it does with metal, and somehow it all hangs together. It’s crazy, and crazy good.

Vectorscan was mixed by Singh and mastered for CD by Richman (who among other things also performed on drums — real ones, without sound replacement). The album is available for pre-sale here. The song is below.

4 Responses to “AMOGH SYMPHONY: “1289, VOYEUR WILL SHINE, FIGHT FOR DISTINCTION, EVOLUTION IS MINE””