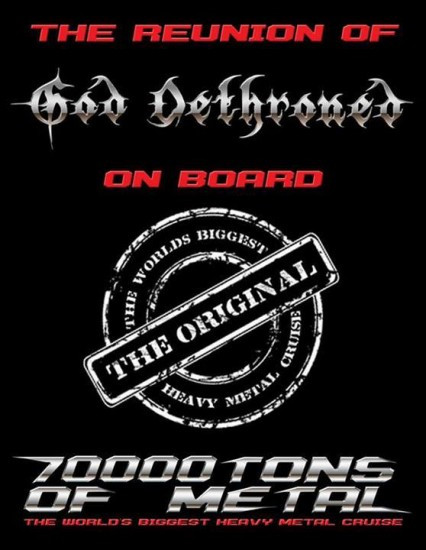 I had planned to save this news item for our next “Seen and Heard” post, but the more I thought about it the more I thought it deserved to stand alone: God Dethroned are reuniting. Last November I speculated that this would happen based on a sequence of posts on the band’s Facebook page, and now it has come to pass.

In January 2012, the band played a farewell performance at the 70000 Tons of Metal cruise, and today the band’s frontman Henri Sattler announced that they will be returning to the stage at the January 2015 edition of 70000 Tons of Metal. From the band’s last line-up, only Sattler and drummer Michiel van der Plicht will remain, to be joined by guest musicians whose identities haven’t yet been announced. But Sattler also made clear that this will not be a one-off performance — additional shows are being planned in 2015.

Sattler’s statement didn’t explicitly address whether the reunion will consist of more than new live shows, but we can only hope that a new album will be coming, too.

Here’s Sattler’s statement in full, followed by a bit of God Dethroned music. For more info about the new 70000 Tons of Metal cruise, go here.

“In early 2011, I was facing two options: one was to announce a break, and the other option was to quit the band. I definitely needed time away from it all, and having a break wasn’t reassuring enough to know if I would be able to recharge the batteries for another go.

“Oddly enough it was at the funeral of the man who discovered us in the first place that I came to realize the story wasn’t finished yet. So here we go again. Don’t think you will be able to see us playing every club for weekends on end. We will only play a small selection of shows and this won’t happen before 2015. Besides that, the core of the band will consist of only Michiel and myself. We’ll have some cool guest musicians lined up, though, to make sure we’ll give you the best performance possible.

“Last but not least, our first shows will be where we played our last ones three years ago. Our rebirth will happen at 70,000 Tons of Metal 2015. See you around!”

4 Responses to “GOD DETHRONED ARE REUNITING”