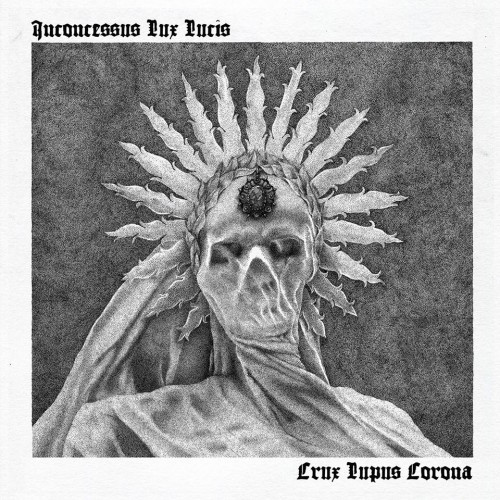 Twenty-five years ago, even twenty years ago, only the clairvoyant could have foreseen that black metal would one day become a laboratory of alchemical experimentation, with its orthodox tropes used as ingredients in the creation of new potions to an extent perhaps unequaled in other metal genres. It’s an evolution filled with irony. Even today, there are legions of hidebound black metal fans who regard themselves as the keepers of the sacred flame; they pounce with bared claws on bands who dare to diverge from the orthodox ferocity of the original templates. Such people will probably turn their noses up at the music of Britain’s Inconcessus Lux Lucis. Their loss.

ILL is a duo consisting of W. Malphas (guitars, drums, vocals) and A. Baal (bass). Their debut album Disintegration: Psalms Of Veneration For The Nefarious Elite was released by Nomos Dei Productions, and they are now working on a second full-length to be released by I, Voidhanger Records in 2015. In the meantime, they have recorded a four-song EP entitled Crux Lupus Corona that I, Voidhanger will be releasing in October, accompanied by a beautiful booklet with artwork created by Bethany White. Today we’re fortunate to bring you the premiere of its second track, a song called “Crux”, as well as the comments of W. Malpas about the band and their music. 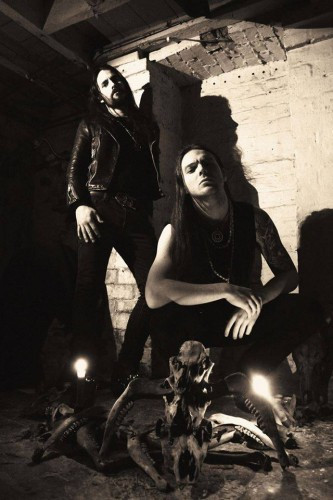 The songs on the EP are not all alike; each has its own identity. “Crux” is a bounding, bouncing, whirling dervish of a song that even in itself is not all one thing. It rocks as much as it rips. At times it may cause you to think of a folk dance, at other times it jabs and feints like a prize fighter. It includes an abundance of fleet-fingered guitar and bass riffing, an incendiary solo, and viciously impassioned vocals.

“Black Metal” is probably as close as you could come to a recognized genre label for this song, if a label is what you need, but for this exotic potion the band’s own description of their music comes closer still: “Saturnian Black Magic”.

After the song, you will find the track list and those promised comments of W. Malphas about the band and this new release. ILL’s Facebook page is at this location:

The past of ILL

M.: The project was originally conceived by myself in 2005 under the moniker Whorethorn. After a period of solitary experimentation, and some lousy demos, I was joined by A. Baal on bass guitar, and by a drummer known as Krayl, with myself handling the guitars and vocals. There were a few other individuals briefly involved around this time, but they don’t need acknowledgement. Together, the three of us recorded a couple of demos in 2008, namely ‘Into the Night’ and ‘Under the Veil of Darkness’ which we were somewhat happy with at the time.

After ‘UTVOD’ was recorded, the other members drifted due to their own commitments, meaning I had to become proficient on drums if I wanted to continue expanding musically. I went on to record two splits, and some more demo material on my own before I made the vital decision to abort the band Whorethorn, and create Inconcessus Lux Lucis.

With a fresh, new exciting project in my sight I started playing music with A. Baal once again. Now you see, I have a tendency to be fairly autocratic and stubborn, so for me, it was a gradual process of getting used to working with another person. That said, I wouldn’t want to work with anyone else on Inconcessus Lux Lucis nowadays. Baal and I have an uncanny ability to bounce ideas and energy off one another, we’re on the same page both musically, and spiritually, and he’s simply the most adept and creative bass player I’ve ever met.

The vision of ILL and the themes covered

M.: Inconcessus Lux Lucis represents all wisdom that the false, tyrant god endeavors to prohibit. Inconcessus Lux Lucis should be perceived as a fissure in this reality, through which the night can freely creep. We are smugglers of spiritual contraband! There are beautiful and cunning forces at work, lurking behind the hollow veil that we call the material world: Beings that abhor these fleshy husks we walk around in so arrogantly, beings that love to shriek mockingly at the absurdity of the human race’s mass delusion. We’ve been unwillingly thrust into god’s image, wherein lies the inherent belief that we too must perceive ourselves as some fragile, fearful ego, housed in clay, as something separate from the ageless and limitless beauty of the vast nothing. Lifetime after lifetime, we’ve been lied to about our true origins and condemned to walk the earth among spiritless slaves, subject to false laws and limitations that we never agreed to adhere to. Our mission is to “tap into” the darkness of the other side, and then translate what we receive into what we feel is the most appropriate form of expression, which in our case is music. We must then spread this work as far and as wide as possible, venerating the forces of the beyond, in the hope that it makes the process of remembering slightly easier for our brothers and sisters that have temporarily “forgotten” themselves, and their own true nature. I like to think that with our music, we’re assisting our cause, even if it’s only very slightly in the grand scheme of things.

The Crux Lupus Corona EP: (a) the concept behind it; (b) a short description of the tracks and style; (c) the EP’s cover art

M.: With Crux Lupus Corona, the inspiration came from the night sky. I believe that certain devious “teachers” are able to manifest themselves in this world (despite god’s best efforts to conceal them all). These can appear as naturally occurring omens, hidden in plain sight, things such as poisonous plants, and certain star constellations, which leads me on to my point: The inspiration behind the new EP was roused by what the constellations of Crux, Lupus, and Corona tell us about the process of death and resurrection. I shall very briefly explain my understanding: Appearing in the first decan of Libra lies Crux (the crucifix, the place of the skull), heralding the beginning of the end for the year. Crux is followed by Lupus (the sacrifice, the wolf, the scorned one), standing in opposition to the lamb/ram that was born in Aries six months earlier. Was this lamb a wolf in sheep’s clothing, so to speak? I consider there to be some very, very cryptic information hidden here, pertaining to the multifaceted, interwoven relationship between The Messiah, The Serpent, and The Lord of Death. Finally, we have the constellation of Corona (the crown), which teaches us of the bliss of resurrection into the great beyond, and of course, the coronation that death grants.

The music on this EP is our most varied yet, I believe that each song has it’s own individual “voice” relating to the particular constellation to which it relates. Style-wise, I guess you could call Crux Lupus Corona heavy metal, rock music, black metal, death metal, whatever. Nonetheless, I don’t find it helpful to use these limited terms in describing something which is an expression of the limitless. In its spirit, I suppose this music is best defined as black metal due to the intent behind it, however, I curse anyone who decides to scorn this work because it doesn’t fit their worthless, restrictive ideas of what black metal should sound like.

The artwork for the EP was created by an artist called Bethany White. The front cover depicts The Crowned Lord of Death in all his magnificence. How it worked was that we gave Bethany the music and lyrics to become absorbed in, and then interpret in her own way via visual illustration. Each time we were shown a new piece of artwork, we were amazed; she had managed to find new levels of meaning in our music that I hadn’t even noticed while I was writing the lyrics! I couldn’t be more pleased with the artwork that Bethany has done for us, it has added another important dimension to the music. I’d actually say it’s vital that the listener has the full booklet in front of them while listening to the music, this would ensure that they receive the deepest level of understanding possible.

The UK scene and the place of ILL in it

M.: I’m not really aware of any “scene” over here in the UK to be honest. Some honorable mentions go to any project that Donn (our live drummer) is involved in, and Funeral Throne; they’re some bands that we believe are doing this for the right reasons. Regarding our place in the UK scene — well, we’ll just have to wait and see about that one, ask us in a year’s time.

M.: At the moment we’re extremely busy, we have something very special in the pipeline, but that will have to remain undisclosed for the time being. We are also currently working towards taking Inconcessus Lux Lucis live. This is something that has taken a lot of planning and preparation, but it will most certainly be spectacular to behold when we do hit the stage.