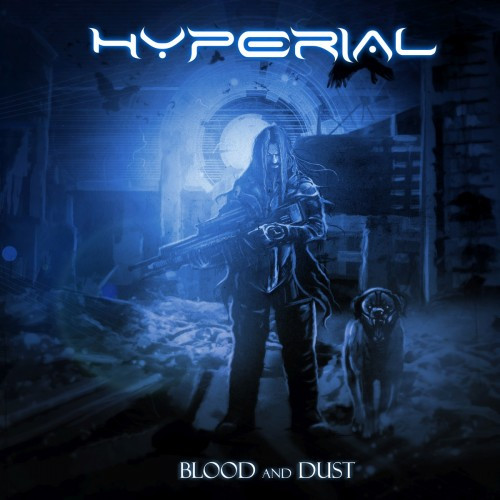 (DGR has been on a review-writing tear — we’ll have something from him every day this week. Today he assesses the new release by Poland’s Hyperial.)

There are some bands out there where within the first thirty seconds of a disc, you get to know exactly what you’re in for. In the latest offering from Poland’s Hyperial, Blood And Dust, which hit in mid-July, the first thirty seconds of the song “The Plague Of The Used Masses” is a frighteningly fast and precise drum-fill-into-blast-beat combo alongside a poweful roar that moves right into a synth-backed, chugging riff. It’s a song of hybrid genres — of blackened death metal, the devastatingly precise drumming and syncopated guitar riffs of industrial death metal, the heavy groove sense of deathcore, and the huge orchestral swells that lend themselves well to symphonic death. It’s a tried and true combo, and in the case of Blood And Dust, one that sounds like the soundtrack to a post-apocalyptic wasteland after a robot uprising.

The band appear to have packed as much as they can within the confines of four- to five-minute songs, with sounds that can be included on a CD that weighs its usual couple of ounces, but that can feel as dense as a brick of lead. Blood And Dust is one of those albums in which you can hear where everything was pulled from, and you can even think of one or two bands who are also doing something similar, but its the kind of music that still has life — it still hasn’t grown tired, it’s still as delicious as it was from the first bite. 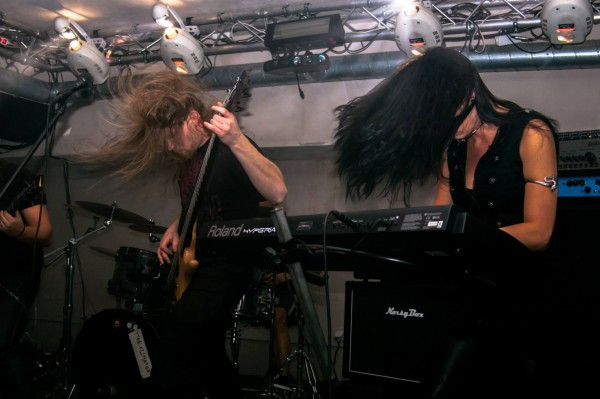 From the start, Blood And Dust declares that this is going to be a percussive, hammering affair and it doesn’t shift far from that. If you’ve been seeking the precise operations of a riveting machine translated into sonic form, then Hyperial have you covered. The band spend much of Blood And Dust evoking the sort of desolate wasteland society that games like Fallout imagine, yet their sound has them atop the behemoth that strides over this land. Hyperial like their grooves heavy and thick, and so in between some oblivion-inspiring blast sections the band will often sway up and down with the rhythm of the sun rising and setting. Of course, they do kick things into overdrive; one of my favorite moments comes in the ending segment of the song “Gehenna Upon His Feet”, which kicks off with a quick shriek before a guitar lead feels like it is being strangled out of existence.

Keyboardist Aneta (aka Darklady) makes things dynamic here, because on top of the symphonic swells and occasional apocalyptic horn section, she gives Hyperial a heavy dose of futurism as well. A couple of songs in particular see them using computerized synth samples not far off from the type used by musician VX from fellow Polish cyber-death metallers Thy Disease. There are occasional calm moments as well, because everyone can use the occasional breather after five songs of constant, almost overwhelming hammering riffs, like being trapped under a meat-pulverizing machine. “By The Alley Of Silence” opens with one, and to be honest, that little bit of clean guitar is pretty pleasing to the ear. Then the band absolutely devastate it until it’s a ten-foot hole in the ground. For a band who stomp around with the weight of Hyperial, though, who could expect anything less?

Vocalist Grochu’s vocal stylings are varied and across the board for this type of music. He has a mighty low roar and a high that he saves for the super-intense moments when everyone in the band is railing on the guitars and drums as the keys soar for the skies. The roar is a super-tough, meaty type that is oft-grunted, keeping to a three- to five-word stanza before the next big slamming chug. Rhythmically, they’re as precise as a telegraph, as if someone could potentially pull Morse code from the syllables he chooses to accentuate in each word. He also has a love for making as many attempts at a pig squeal as humanly possible. Any word that ends in a long E will likely be stretched out into a Reeeeeeeee sound, but where it goes is what makes things interesting. 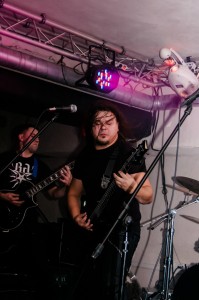 If one were to crown the king of the inhaled scream, the honor would probably go to Julian Truchan from Benighted (side note: Disc is still great!), and Grochu is in kind of a different market, as his feel like they’ve got a black metal rasp in them. They’re high and a little thin, which means they feel more like they’re being shrieked than bellowed by an inhuman animal. It’s black metal gone pig squeal and it’s real strange, but it works well within the confines of his heavy growls that soon punctuate the air. He turns absolutely feral in the opening segments of “In The Desert Of Dementia”, though, which is worth listening to if only for his rabid growls in the opening.

He also teams up with fellow guitarist Kula in creating some truly Armageddon-esque scenarios. There’s a percussive rhythm to how the band move; they sound like robotic feet coming down from the sky, heralded by an orchestra, lifting up, slamming down, repeat process, and so the guitars follow suit, latching on top of each loud crash. Drummer Bocian, whom has been with the band since 2011 (according to Metal-Archives) is part of this creation as well, although he definitely gets his opportunities to become one of the many death metal hyper-blasters, as well as sounding like a marathon-running track star on speed, with as much double-bass work as the guy does.

Blood And Dust also continues a now two-album trend of the band including a cover song to close out their full-length releases. In this case, it’s a shortened and slightly faster cover of the song “Luciferion” by the Polish band Tower, which was track five on their 1999 disc Mercury. You can hear the original here and the cover version here. I bring this up separately from the rest of album because the song is really good. The Tower version is already a pretty crushing slab of gothic-flavored death metal, but Hyperial speed it up just the tiniest bit in the opening and then transform it into a massive double-bass-rolled gallop and make the song sound absolutely massive. They’ve made it sound like it belongs on Blood And Dust, albeit written more around a circle-windmill headbanging sort of riff than the up/down dynamic that characterizes much of the album, and it’s actually something of a highlight. The fact that it’s a little calmer than the apocalyptic havoc of most of the album is also good as well. The usage of keyboards more in line with Tower’s traditional deployment also changes the sound enough to give the song life. Yes, it has occurred to me that I am referring to keyboard usage from a song that is 15(!) years old as being something traditional — like of ye olden times — and that thought will weigh on me for the rest of the day. It’s a nice shift from the oppressive orchestration though. 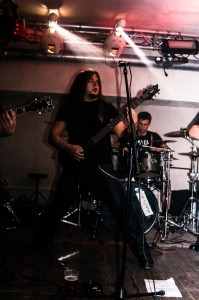 Hyperial are one of those bands who fill out the definition of the word “brutal” to a T — in the caveman sense, of course. This is music that may appeal to my intellectual side, as I imagine it being the dystopian sci-fi future in which I wish more movies were set, but it is really appealing more to Gronk!, DGR’s relative from the BC days who drew antelopes on walls and hit rocks with bigger rocks and enjoyed the rhythmic nature of it. Probably why I likes me a loud-ass keyboard when I write my reviews.

Yes, Blood And Dust is a Titan in its sound, as if the band tried to fit as many chugging riffs and grooves into each song as possible, as if they would never see a recording studio again, as if Blood And Dust were the monument upon which the band decided to carve their name. As a futuristic delivery system of death metal, Blood And Dust succeeds. It has that crushing magnitude that sounds huge and is slow-moving enough to inspire a sense of impending Armageddon over its slightly under forty-minute runtime. It’s a good death metal release which shows that Poland can deliver death metal in multiple forms, whether it be from Satan or Mecha-Satan.

3 Responses to “HYPERIAL: “BLOOD AND DUST””