Björn Anderssen is a skilled channeler who transforms chthonic energies of primordial forces into massive and distorted guitar vibes. He is one of the founders of Swedish doom/sludge/stoner act Ocean Chief, who released their new album Universums härd through the well-known I Hate Records.

As the sea of sound spreads its black waves and consumes us, to become one with the cosmic ocean and find ourselves as tiny sparks of light amidst its senseless vastness… just try to relax and find the joy of primitive and wild delight.

Hail Björn! How are you? How goes the promotion of Ocean Chief’s new album Universums härd?

Hey! So far it’s all been good. The reviews has been overly positive, and most people seem to embrace the change since the previous albums. This one is much more dynamic in tempos and songs, hence easier to digest for the listener. Obviously not everyone has been as happy as others, but what can you do?!

Do you really think that long tracks are a problem for listeners who put their hands onto Ocean Chief’s albums? I’m ready to listen to all 19 minutes of “Slipsten” from your previous album Sten just to reach that cosmic solo in the end! By the way what is this song about?

Yes, I would think so. It’s not always easy to digest 20-minute songs, you need to stay sharp. On the other hand, there is something special with long tracks. It’s easier to get lost in music if the tracks have some space. And certain doom metal is ideal for this. It’s like entering a new world. To me Sten is a fine example of a groundbreaking record within the ”scene”.

I have no idea of what ”Slipsten” is about. You have to ask Tobias. The lyrics are a bit cryptic. I guess it’s about a ”Slipsten”! (grindstone)

Does the band’s name reflect its conception now, after the release of Universums härd? And what kind of meaning did you put into it?

You can think of the universe as a vast never-ending ocean… and we’re the Chief.

On the other hand we don’t like to put too much meaning into it. It’s just a band name which was dropped to us 12 years ago. It fit us just fine though, since we’ve always been about heavy monster riffs with attitude — just like an Ocean Chief, I imagine!

But I believe that most of your listeners consider that you have lyrics mostly based on Nordic mythology – how did the lyrical conception of Ocean Chief change through the time?

I do not remember why we started with the mythology thing. We named one of our first songs “Oden” (Odin), and from there we built upon some kind of theme. But the lyrics have not been exclusively about ancient gods. Also, the universe, the strength of the stone, sweets, and (of course) the Ocean Chief.

What are your new songs about?

It´s a celebration of the power that holds all life and matter in our Universe and the creation of all. Not a man-made god creation. It’s more a quest to find the “beings” that made the Universe. We are all doomed! That is the theme of Universums härd.

Ocean Chief’s sound changes a bit from album to album. How often do you change and renew your equipment for more effective work with the sound?

A huge part of the sound is what studio-equipment you are able to use and the amount of time you can put down on the recording. This time we went to Studio Underjord for the first time and the sound turned out different due to the recording room and how we engineered it all. As for the guitars, drums, etc, we only get new stuff when we really need it. It’s way too expensive to change gear for every recording unless you are supported by a major label, or win the lottery!

Your new album has an art-work of a really cosmic scale. Does it mean that Ocean Chief has changed it direction toward more psychedelic and space sound?

We have worked with Elaine Ni Cuana (a.k.a. Sgraffitto) for our last three albums. The artwork has a soul behind it, from someone who appreciates the music and can relate to the topics and themes. We always give her free hands to do what she feels like, only letting her know the current theme and the main colors we want to use. For Universums härd we basically told her to do something ”cosmic”, and it turned out very fine in the end, as usual. I like the artwork very much.

As for future music I don’t mind getting more ”space” in the sound, experiment with different stuff. We’ll see. 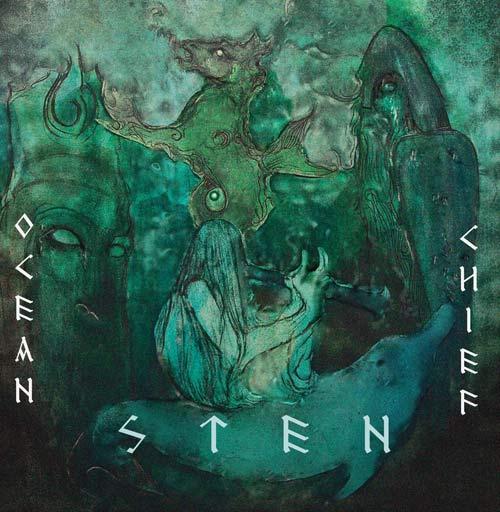 And your previous album Sten has astonishing art-work. What is the story behind it and does it connect with some of your songs?

I agree, Sten has a brilliant artwork. The flute and the dolphin on the front… Very intriguing. For Sten we wanted to touch base with nature, both musically and with the artwork. It’s a massive slab of psychedelic doom, with an extraordinarily beautiful artwork which would look absolutely awesome on vinyl. Hopefully one day we will see a 2xLP vinyl edition of Sten with a powerful gatefold album cover.

Besides all changes… What is a core of your music that you would like to leave unchanged through the next works?

I think we are open to do whatever we want as long as it feels “heavy” in general. The stuff I’ve done so far, is different, but not that different. We will see what happens when we start writing new songs all together.

So ’til now you have only one author in the band? How do you usually compose songs?

No, we all compose. The challenge is to get everything to fit together, which we do when we rehearse. That’s why we hardly ever play old songs, we are busy rehearsing new stuff!

Do you have some new songs left from the Universums härd recording session? And if so, then how do you plan to use it?

Nope, that was it. We wrote Universums härd in just a few months before we recorded it. It’s part of the charm of the album, and it was a conscious choice to try out.

Do you feel a connection of your songs with tribal and ritualistic music?

For sure. Getting thru the entire Sten album without feeling ritualistic is not possible. I am very influenced by a lot of ambient stuff, instrumental bands, and world music. Ocean Chief is a doom-tribe from the North!

There’s a composition with oriental based melodies on new album – it’s “Farden”. What inspired you to compose a song like that?

“Färden” is an old piece which we have played once in a while during the last 6 or 7 years, just never recorded it before. It fitted very fine on this album since the songs are much shorter. It has a GREAT solo courtesy of Christian, and I must say it’s one of my fav songs on the album.

You will play a few gigs with your label-colleagues Zaum from Canada this autumn. Did I Hate Records organize this tour or was it completely your idea?

It was Kyle from ZAUM who came up with the idea since they were touring Europe this autumn. We just tag along for a few Swedish dates and nothing more than that. I recommend everyone to check out this band when they are touring Europe during September/October. If you’re into transcendental mantra heaviness in the vein of Om, mixed with The Wounded Kings brand of doom, you might actually adore this. And word is that they are smashing live!

Then I wish you and Zaum great gigs all over Europe! Thank you for your time and answers Björn! I hope that this interview will help to spread the word about Ocean Chief further. Do you have a few more words of Nordic wisdom to share with our readers?

Nordic wisdo(o)m: Check out our albums and listen to Black Sabbath.