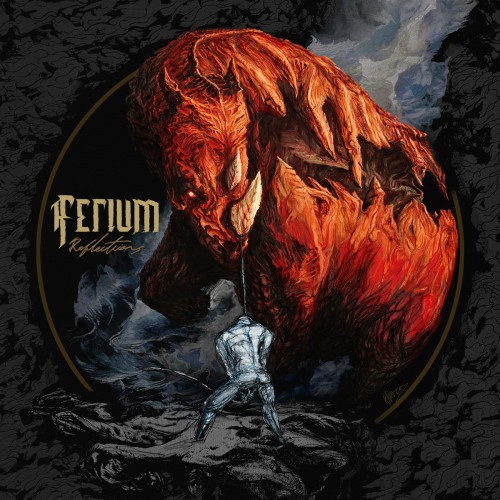 (Guest writer Ty Lowery brings us this review of the 2014 debut album by Israel’s Ferium, which features cover art by Eliran Kantor.)

2014 has been a great year for technical death metal. Inanimate Existence, Hour of Pennance, Artifical Brain, and Archspire have all released albums this year, and that doesn’t even begin to touch the tip of the iceberg. There’s enough heads getting cut off on a daily basis to make Vlad the Impaler turn in his sword and adopt a more subtle life of knitting and macramé. What I’m trying to say is, sometimes you just need a break from all the ridiculously fast shred.

Enter Israel’s Ferium. These guys couldn’t be pinned down by Bullseye on his best day. One moment they’re thrashing their way through a flame-tongued lead accompanied by a mid-tempo blast beat and the next they’re flaunting a swagger not often seen in metal this heavy. It’s an intricate mix of groove and technicality that lends Reflections both approachability and sustainability. There’s enough beef there to keep the thrill-seekers satiated, with plenty of rolling technicality to intrigue even the most seasoned of death metal’s veterans, and then there’s just the nicest little sprinkling of groove (that swagger I was talking about) to make the prog kids raise an eyebrow over their thick framed glasses.

Take “By the Book”, for example. The track starts with loud, irregular snare accents and a consistent chord being strummed over a deep, dark lead. Throughout the song, there’s thrashy death metal riffs blaring over throbbing double bass. Then comes a breakdown that isn’t a breakdown, and now we’re back to an off-time drum rhythm that keeps the listener trying to figure where the song’s going to head next. It sounds like a cluster-fuck on paper, but here’s the thing. It’s not. It’s stitched together so neatly that all of the individual parts come together nicely.

“Mirror” starts with a better djent lead than you’ve heard from any number of your little cousin’s favorite bands. Then it changes again, and where the hell are we now? This washing refrain breaking over the nearly gang-shout vocals turns quickly into a slam-worthy riff that would fit easily into Born of Osiris’s early discography. “Change of Winds” confirms the hit by demonstrating even further djenty finger magic. But don’t be fooled. These tracks aren’t there to pander to the popular kids at the metal table. Oh no. Both songs take the trendy genre by the pigtails and bend it over the nearest table and make it bite a pillow.

Then you’ve got songs that sound straight from the good ole days of straight-ahead, balls-to-the-wall thrash. “Downhill from Nothing” is one such song. Starting up with a snarling riff, these guys make their bed as easily as you please. Sure, there’s death-tinged licks here and there that throw off the fist pumping, but that’s what gives it the flavor. The raspy screams provide a nice reminder of the eventual hurt that’s making its way systematically back to you, and then you’re back in the fray, getting torn back and forth by the snappy drums and the no-nonsense guitar work.

And to top off all the weird shit going on, about halfway through the album, they throw “The Black Eyes” at you. Starting quietly with a calm piano being played behind a discordant guitar and some complacent, yet somehow anxious drums, this song eases you into a pool of beautiful juxtaposition. The piano can be heard fighting to make its voice heard as the guitars gradually grow into a false crescendo. It’s a moment of respite from all the confusion, a proverbial breath of fresh air.

While around the same run-time as half of the songs on the album, the instrumental track seems to come and go quickly, only briefly rising above the current before relenting itself to  the whirlpool of the second half of the album. After the quick double-bass fill, the song fades out, and The Black Eyes of the storm have passed.

This isn’t exactly your standard fare of death metal. These guys aren’t messing around. They’re taking what they want and using it in the most calculating way. There’s technicality from top to bottom on just about every track of this album. Some might be turned off that it’s not all played at blistering speeds, but the fact that this band can maintain the technicality of the music at a slower pace and still manage to string together equal parts of interwoven grooves and crushing brutality convinces me that they will be around for a good time.

If you haven’t already, check out a nice sampling from Reflections on Soundcloud (below), then head over to Transcend Music’s Big Cartel page (here) and support these guys. They’re too good not to get your coin.