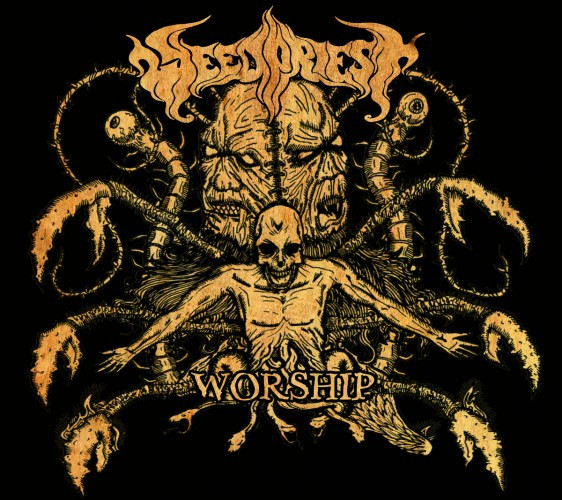 (In this post DGR reviews the 2014 EP by Ireland’s Weed Priest.)

Let’s sit down for a moment and have a quick heart to heart chat. I’m not the most worldly when it comes to heavy metal, but if you name your band Weed Priest, you can really only be one genre right? A name like that has to point to the stoner doom spectrum of things. Especially when it comes paired with artwork and a logo like what you see above (my goodness I like that artwork). So, while Galway, Ireland-based band Weed Priest may never be accused of burying the lead, you could definitely say that the group have the image side of things pinned down to a T.

Their newest release, the EP Worship, released August 1st, has a lot to live up to then — because a group who have so finely honed their image, down to the point where each member now refers to himself as “Brother _____” in their line-up listings, had better be good on the music side of things. Otherwise, it’s all wasted potential. Fortunately, Weed Priest do live up to their outward appearances and public personae about the best that anyone could have hoped for.

Worship is a retro-as-hell sounding disc, as if it were crafted as a worship ritual for the early seeds of doom, the occult, and stoner rock that were planted in the early 70’s. It sounds like it was recorded after a massive Sabbath binge, and it stands as an all-too-brief preview of what could be a really good run from a band with only two other releases to their name, if they stay on the course where Worship is pointing. 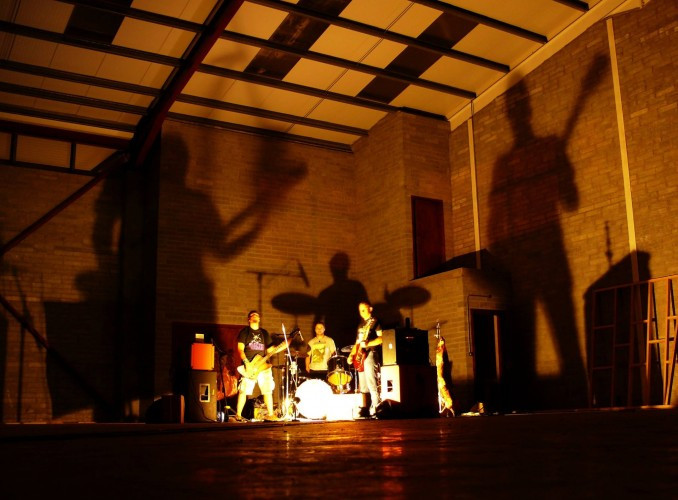 A spin of Worship is a bit like a trip in a time machine — a trip backward to hazy, smoke-filled rooms and bands playing with hair so long and so shadowed by bad lighting that it’s hard to tell where the hair ends and the long clothing begins. Weed Priest aren’t an entirely retro act — they’ve actually got a pretty modern sound — but it’s clear throughout Worship where the genesis of the band lies and the altars before which they pray.

Since Worship includes only three tracks, this review will go a little in-depth with each one. The first two tracks are close to six-and-a-half minutes long and, combined with the third song, they bring the run-time of Worship to about twenty-two minutes. Given that the EP is called Worship, it’s fitting that the opening track is named “Ritual”. “Ritual” is the smokey monster of this EP, with its vocals fading in and out, buried in the back of a huge wall of fuzzed-out guitars, like they recorded it without the vocalist being mic’d up and told him to just scream at the top of his lungs. There is some singing, but it’s very much in the background of the guitar riffs, which move in waves. As the band chants and he responds, “Ritual” becomes one of two tracks that fit in extremely well with its name.

“Killvlad”, Worship’s second song, may in fact be my favorite simply because it sounds the most “metal”, so to speak. It stomps around for much of its opening, and I can’t help but admit being drawn to the heavy cymbal usage throughout the song as well. The crash and splash cymbals both ring through super-crisp, coupled with some wet tom work, and it’s probably the clearest you’ll hear the band. Since the song is a bit of a lumbering behemoth, you really get the image of some otherwordly beast stomping its way through the center of this EP.

The third track, “Possessed”, is where Weed Priest earn their occult tag in spades. At almost nine-and-a-half minutes (just shy by five seconds!), the song sounds like a ritual in its own right, fueled by overdriven guitars, slow and laborious drumming, and vocals that rotate between dispassionate and harmonized to screamed in the background. Even the long guitar solo consists of held-out notes and rarely speeds up, the whole thing closing out the track like a hazy dream. The song is a slow, murky river of music that envelops the listener in its bass-focused glory. The band even filter in sound samples taken from various broadcasts to push home the possession point.

Weed Priest, who have experienced some line-up changes between the completion of work on Worship and its release, have some really good music on their hands here. It’s very much in the vein of the doom genre, with the band essentially pulling us back in time, yet they’ve got a sense of the modernized metal sound, and as Worship pays its tributes and makes its blood sacrifices, they avoid pitfalls suffered by others. Much of the stoner doom genre stereotype is based on long fuzzed-out songs that have a bad habit of just meandering to the point of absolute boredom unless you’re, well, stoned. Then you likely can’t remember the previous half hour of droning guitars anyway. Weed Priest don’t fall into that trope on Worship. Yeah, three songs coming in at over twenty-one minutes might seem a little ridiculous, but the band know when to change up each part, when to play into the psychedelia of all of it, and when to just let a song close itself out and end.

Weed Priest are coming out of a seemingly quiet corner of Ireland with a loud beast of an EP in Worship, and it’s well worth your time.