Fortune (or Satan) has smiled on us, because today we have been chosen to deliver unto you a stream of the new album by Midnight, from beginning to end, from “Penetratal Curse” to “Aggressive Crucifixion”, and beyond. And we introduce you to No Mercy For Mayhem with this review of the album by our brother BadWolf:

Jamie “Athenar” Walters spent a long time recording demos, 7-inches, and splits as Midnight before he released his debut album, much like many other solo black metal musicians in America. But that long gestation period, I’m afraid, is where the similarities end. Midnight is nothing like Krieg, Xasthur, or Weakling. Bedroom black metal? More like satanic sex dungeon metal-n-roll. The only thing atmospheric about Midnight is the thin film of grindhouse sleaze that permeates its propulsive stew of old-school black metal and cock rock.

Walters’s 2011 debut, Satanic Royalty, wound up being one of my favorite albums of that year—too bad I didn’t get a chance to hear it until 2012. That record mixed Venom-and-Motörhead-isms with arena-ready hooks. For the past two years, I’ve been frothing at the mouth to get a taste of its followup, and the Complete and Total Hell compilation album (reviewed here), though incredible, just did not scratch the itch. Seeing Midnight’s energetic performance at Maryland Deathfest 2013 only made the wait more unbearable. 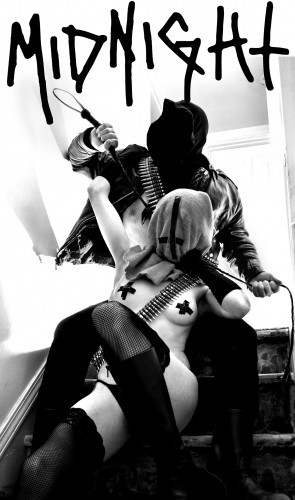 But now my wait is over. No Mercy For Mayhem is the successor to Satanic Royalty, and it is more than worthy, even if the “black” has been dialed back even further in favor of more primitive “and roll” bits.

No Mercy For Mayhem is still a very stripped-down drag race to the finish, but it does pack some more variety than its predecessor. Sure, there’s great thrashers, like lead single “Evil Like a Knife,” with its coconut-busting snare hit signaling the record’s beginning like a gunshot at the starting line. In the same vein “The Final Rape of Night,” and “Try Suicide” also keep things at high velocity, as well as in poor taste. Guilty pleasures are the name of the Midnight game. 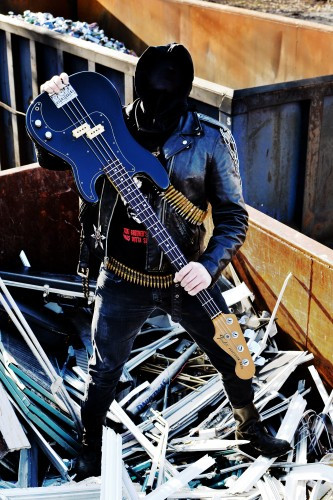 But there’s curves in the track as well, and they’re all near the start of the record. “Prowling Leather,” keeps to a creepy, near-swing pocket, hearkening back to rock music influences that predate even the kind of stuff Ghost B.C. apes, all the while never failing to sound like Midnight—maybe it’s the creepy as fuck sliding guitar line. Immediately afterward, the title track, maybe the strongest cut on the album, makes a huge-venue singalong out of Walters’s heathen yowl, mining the AC/DC vein that’s always run through Midnight. Hell, “Degradation,” in both guitar tone and form, is pretty much a Ramones song. It’s territory that black metal, even black and roll, tends to avoid, but Walters keeps it so dirty as to be believable.

The secret genius of Midnight is the knowledge that black metal can totally use big pop-rock hooks, provided the production, lyrics, and vocals around them are dirty enough. No Mercy For Mayhem is Midnight embracing earworms even more. I can’t stop spinning the promo, and I bet you’re going to listen to this stream more than once.

No Mercy For Mayhem is out today on the Hells Headbangers label, and you can get it via one of the links below. Midnight has a Facebook page at this place.

5 Responses to “THE STRIKE OF MIDNIGHT: A REVIEW AND FULL-ALBUM STREAM OF “NO MERCY FOR MAYHEM””