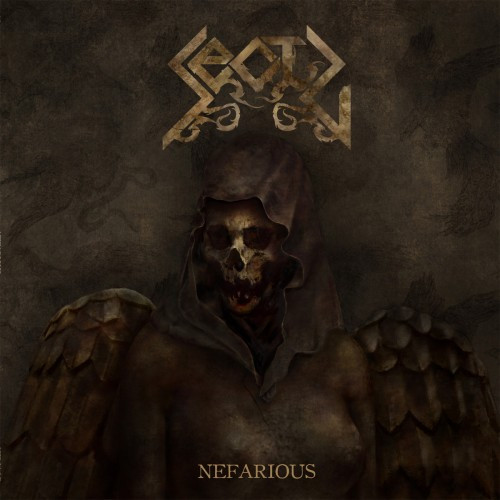 (DGR reviews the third album by Sweden’s Sectu, which was launched in June of this year.)

The discovery of Sectu could not have come at a better time for your lovely reviewer here. While I’ve buried myself in a smattering of different genres recently, there hasn’t really been a traditional death metal disc that has caught mine eye in a bit. You can actually thank Volturyon for this discovery, because while bouncing around to their Bandcamp page to look for a stream we could attach to the review of Human Demolition, I found the Swedish record label ViciSolum Records and their Bandcamp page — and just below Volturyon were Sectu.

Now, I absolutely love record company Bandcamp pages. It’s such an amazing way to discover bands and, if you’re coming across an album that has come out already, an excellent way to get a big sample of what you’ll be in for. It’s the modern-day “stuck in a CD store listening to an album to find out what’s on it” — minus the headphones and the trying your damndest not to rock out in public.

Sectu, who are based in Stockholm, Sweden, are hard to pin down within the death metal genre. They have elements of tech-death, but also a huge treasure trove of Swedish death metal from which to pull, and are even prone to delving into some of Morbid Angel’s more apocalyptic moments. 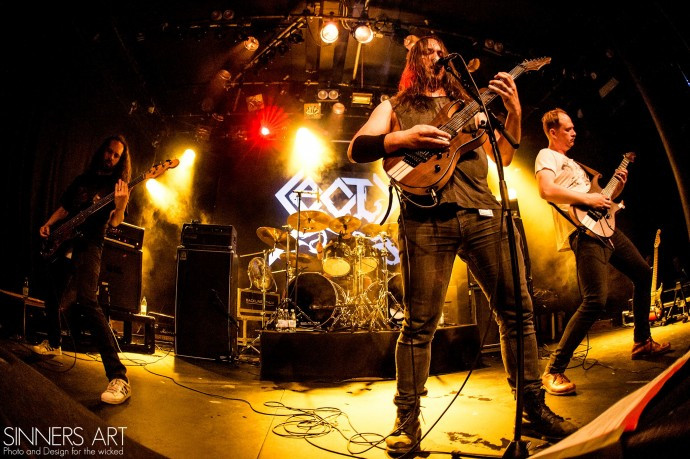 They are composed of four musicians, two of whom have spent a ton of time in other bands, meaning that descriptions of Sectu will sound like absolute wackiness. Based on their rhythm section alone, you could describe Sectu (accurately) as including members who’ve spent time in Evergrey, Therion, Chimaira, Tiamat, Soilwork, Dog Faced Gods, Demonoid, Mind’s Eye, and at least four others.

But none of those bands, even in any sort of insane combination, comes anywhere close to what is happening within the boundaries of Sectu’s latest album, Nefarious. It’s a disc that has slowly grown on me and whose stream on the Bandcamp page has been constantly marked for me to come back to, as its discordant tendencies and Gordian knots of death metal songwriting have overtaken my senses.

From the opening notes of the song “Fiery Initiator”, Sectu signal that you’re in for something rather interesting. The band have a huge backing death metal sound, but the guitar work on this disc feels super-intricate — which is where the band draw comparisons to the tech-death scenes.

The guitar performances create multiple melodies that are especially sharp in structure, feeling full of jagged corners and awkward crags. Nefarious is full of insect-like guitar playing on the lead front, with melodies and different wanderings that evoke the activities of our tiny friends. Whenever the guitar gets moving, its wall of notes have a skittering rhythm, like the soundtrack to a hive construction.

To switch metaphors, Nefarious feels like endless hexagonal structures being stacked on top of each other, so that each individual piece, when broken down, seems like a relatively simple shape, but when piled up over time with other pieces begins to take on an alien and mathematically complex structure unto itself. Those parts often come to define what happens across Nefarious, as the rhythm sections behind it are often lost in their own apocalyptic and discordant groove. Sectu are one of those bands who have the headbanging parts as their foundation and core, and then the lead up-front is where all the craziness really happens.

Vocalist Stefan Lundgren has the job of handling both guitars and vocals, and Sectu chose to have the vocals sort of line up with the guitars, as opposed to being right up in the front of the class. Because of this, Nefarious sounds as if it was recorded in an empty, industrial wasteland. Given the variety of genres Sectu pack into their sound, that may not have been the intended goal, but it loans itself well to the alien and angular structures from which the band have erected their songs. It’s definitely not the type of album that is approachable from the get-go, but it has depth of the kind you’ll discover rather quickly and it makes Nefarious‘ siren call hypnotic; no one would blame you for continuing to go back until you feel like you’ve fully “gotten it”.

The combo of the last three songs on Nefarious — “River Of Oblivion”, “Usurper”, and “The Wanderer” — is where the band really allow themselves to get adventurous, especially on the eight-minute slow-motion apocalypse that is “Usurper”. With all the talk in this review of odd structures and angular songwriting, “Usurper” is where all of that comes fully into play. It really feels like the song around which Nefarious was written.

“Usurper” shifts from a mid-tempo growler to something in which the walls of sound come crashing down around the band. It’s not a pretty track, and the decision to add a light echo effect to Stefan’s voice in this song could lead to Obscura comparisons.

“The Wanderer” gets points as well, specifically for whatever in the hell that echoing and ugly guitar slide noise is that starts to come in around the two-minute mark. It’s especially jarring in the headphones, and for an album that prides itself on all the little oddities that are packed within its walls, that noise still manages to surprise and add to a crushing oblivion that takes place over “The Wanderers”‘ four and a half minutes.

Sectu love their huge, chugging rhythm riffs, so often you’ll find songs just descending into huge starting and stopping sections where in your mind’s eye you imagine every guitar chord and note being down-strummed in a huge motion. There’s no speed attached to it at all, and those sections specifically give the band the desired Goliath striding the Earth effect.

There’s no getting around it: Nefarious is a weird, ugly disc. It’s the mutant offspring of a bunch of supremely talented musicians seeking to make angular and barely approachable tech-death. It’s difficult as hell to pigeonhole Sectu in one specific style, but damned if Nefarious doesn’t have a super-heavy hypnotic quality. It’s one of those albums where another band that isn’t doing shit could easily have some of their ground stolen by another band. Sectu, for example, could fill the role that groups like Obscura are leaving vacant as they find themselves dragging ass or held down by their labels while actually trying to get something done.

It’s got that huge production style, that organic and empty-room quality, and that approach to songwriting that is challenging to wrap your mind around, but interesting enough to keep you locked in for all of Nefarious’ run time. The album has overtaken me, and during the time when I’ve been thinking about writing this review, I’ve written a ton of others — yet it has always been Nefarious playing in the background, always the one I’m listening to at work while I try my hardest to assemble some sort of cogent thought about it.

Nefarious is a great disc that’s a slow burn, but after a bit it starts to grow on you and absorb you — the very definition of the kind of album we call a “grower”. It’s indeed kind of ugly at first, but in time you start to see past that, you hear that alien guitar playing, the hyper-technical lead work, the apocalyptic groove, and by the time those descriptions start to pop into your head, then it’s time to just hang it up, because now you’re a part of the colony, and Sectu has you.