To my mind each and every Decapitated album has a different flavour to it. Oh, the band definitely have a unique and specific sound, no doubt, but even within that, there’s still more than enough room for nuances of expression and style.

For example, Winds of Creation has a certain bloodstained thrashiness to it, Nihility an unearthly post-human precision, The Negation an otherworldly, angular feel… while Organic Hallucinosis positively reeks of unkempt madness and cerebrospinal corruption, and Carnival Is Forever offered us a warped, reflective mirror made of sharpened edges and shattered perceptions… Ultimately I think you’d be hard pressed to mistake a song from one album as belonging to any of the others, and yet each one remains recognisably, even intimately, Decapitated.

With Blood Mantra the Polish psychonauts offer up yet another facet of their ever-evolving sound, an album permeated with an eerie, almost nightmarish, sensation of discomfort and dissociation, carrying through familiar threads of each of its predecessors, whilst simultaneously twisting and reweaving them into fresh new forms. 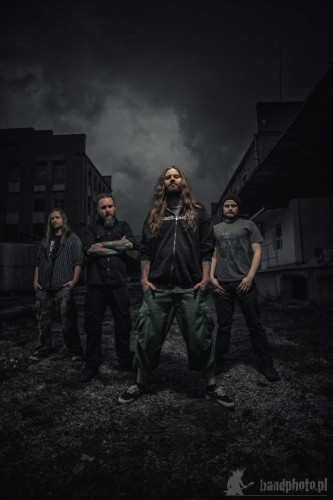 Oh, all the familiar elements are still in play… punishing, pneumatic riffage and choking, clandestine lead parts… contorted, dominating drum work… grinding, gut-level bass lines… rabid vocals bleeding with hostility… everything you’d want and everything you might expect of the band. But the flavour is, as always, subtly different. It’s no coincidence that the album art is adorned with a mysterious figure, hands stretched out in offering or supplication, as the music on Blood Mantra bears with it an uneasy feeling of ritualistic horror and disorder, a creeping  undercurrent of sensual sickness that underlies every ballistic riff and bludgeoning drum pattern.

The mind-shredding malevolence of “Exiled in Flesh” shows the band at their most directly Death Metal, yet is also drowning in layers of bleak, disturbing dissonance. On one level it’s a perfectly formed blast of primal aggression and blitzkrieg blast-work, yet beneath that dwells a murky abyss of haunting horror and lurking insanity.

It’s this multi-levelled approach that gives the album its true power, allowing it to assault listeners on both the physical and the mental planes, pummelling them with violent aggression whilst whispering a litany of wordless terror into the darkest reaches of their psyche.

“The Blasphemous Psalm to the Dummy God Creation”, for example, is a rapid-fire explosion of sonic shrapnel that bridges the gap between the mental anguish of Organic Hallucinosis and the feral lunacy of Carnival Is Forever. Its twitching, anxiety-inducing riffage and the migraine-inducing throb of its undulating bass lines, coupled with the feverish frenzy of its drumming, prey upon the listener’s nerves as much as upon their ear-drums, with merciless precision and predatory intent.

The machine-like riffage and nailgun chuggery of “Veins” hearkens back to both Nihility and The Negation, but with a heavier helping of ugly, leprous groove and parasitic melody, reaching a peak of almost religious ecstasy in its warped, atmospheric mid-section, while the title track is an infectious, malignant ear-worm of butcher-hook riffage and skin-crawling pseudo-melody that drags the listener along in its wake through sheer, inescapable inertia.

The jerky, spidery-like riffs of “Nest” make the song perhaps the long-awaited sequel to “Spheres of Madness” we’ve all subconsciously been waiting for… albeit one with a singular taste for disquieting disharmony, swathing the track in a shroud of phantom dissonance and discomfort.

It’s followed by the fret-warping riffs and mangled grooves of “Instinct”, a madcap melding of all eras of the band’s previous existence, a hideous amalgamation of brutal form and blasphemous function, punctuated by moments of crippling calm and sudden eruptions of staccato self-flagellation.

“Blindness” has a certain post-Meshuggah feel to it – not that this is something unusual for Decapitated – but dispenses with much of the mechanised heaviness in favour of something far more insidious, a creeping musical mantra that dances on the edge of psychosis, layers of rippling guitar work and desiccated atmospherics twisting and turning to a rhythmic, instinctive pulse, before the exsanguinating ambience of “Red Sun” finally allows the album to bleed out into nothingness and welcoming oblivion.

Very much an album that works on multiple levels, Blood Mantra can be appreciated just as much for its cerebral prowess as its sheer physical intensity. It hits as hard and as fast as any Death Metal album you might care to mention, with Vogg’s mind-bending guitar work and Rafal’s cannibalistic bark (not to mention new drummer Mlody’s weapons-grade performance behind the drum kit) able to go toe-to-toe with the best of them.

But what really sets it apart is the hypnotic way it insinuates its message into the listener’s brain, its juggernaut assault on the senses concealing sinister suggestions of subliminal horror beneath waves of overwhelming metallic madness.

Prepare yourself to be crushed, mentally and physically.

Blood Mantra is coming our way from Nuclear Blast… on September 26 (EU), September 29 (EU), and September 30 (NA). CDs, vinyls, and assorted bundles are available for order here. Decapitated will be accompanying GWAR and American Sharks on a U.S. tour this fall — the schedule appears after the following song from Blood Mantra and the album’s official trailer.