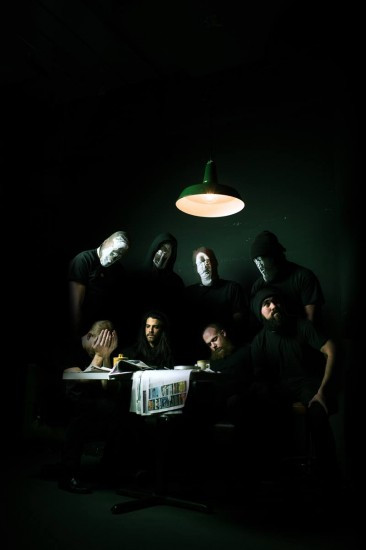 Almost exactly one year ago I reviewed the debut EP (Sylvan Matriarch) by a Pittsburgh band named Dendritic Arbor. Listening to the EP, I had the sensation that the music was causing my own dendritic arbors to grow in rampant fashion — and then burning them to ash. Borrowing chaotically from black metal, hardcore, sludge, industrial, doom, and freakish electronic noise, the music created an overall atmosphere of severe derangement, as if the inmates had been put in charge of the asylum after being injected with gasoline and then set on fire. I found the whole EP (which is available on Bandcamp) fascinating, wildly creative, and extremely destructive.

Dendritic Arbor have now recorded a new song that will be released on a forthcoming compilation to be released by Philadelphia’s  Anthropic Records, and we’re premiering it today in the form of a music video. The song’s name is “Genie”, and it’s based on the tortured life of Susan Wiley (nicknamed “Genie”), whose abuse, neglect, and social isolation at the hands of her father during the first 13 years of her life prevented her from ever learning speech and led her to be considered a “feral child”.

After being rescued from the prison in her home by Los Angeles child welfare authorities in 1970, Genie became the subject of extensive scientific study, while being moved in and out of foster homes and a series of institutions for disabled adults — many of which seem to have been environments just as abusive as the one from which she was “rescued”. (Read more here.)

The video for “Genie”, which is also disorienting, was directed by Joshua Rievel and Scott Whiteman (Everything Is Terrible!).

Dendritic Arbor are now working on new music to be included on a release this winter by Grimoire Records. Next month Dendritic Arbor will begin a nationwide tour, and you’ll find the schedule for it after the video for “Genie” — which comes next.

One Response to “AN NCS VIDEO PREMIERE: DENDRITIC ARBOR — “GENIE””